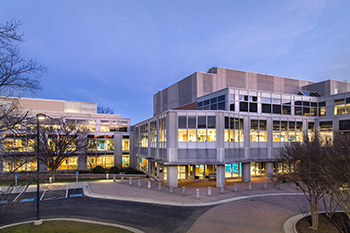 GlaxoSmithKline, the global health care company that concluded a merger with Pfizer in August, is expanding in Richmond, with plans to hire 150 people for a research and development hub.

Gov. Ralph Northam on Thursday announced the expansion of the GSK Consumer Healthcare center on Sherwood Avenue — known to Richmonders as the old A.H. Robins facility — near Interstate 95. GSK Consumer Healthcare announced its merger with Pfizer’s consumer research division last December and has moved the joint venture’s operations into Pfizer’s former global R&D headquarters in Richmond, which will be expanded to make room for the influx of new employees.

The Virginia Economic Development Partnership, the Greater Richmond Partnership and the city of Richmond worked together beginning last December to retain the facility after the merger was announced, according to the GRP.

Northam said that GSK Consumer Healthcare plans to invest $16.7 million to expand its consumer research center in Richmond, which will be one of three R&D laboratory hubs run by the new joint venture between GSK and Pfizer.

The company did not announce a timeline for hiring, according to the GRP.

“This project is the best of both worlds,” said Lara Fritts, president and CEO of the GRP. “When we’re able to retain high-paying talent as well as expand jobs and capital investment, then it really becomes a win-win for the community.”

Gov. Northam approved a $675,000 grant from the state’s Opportunity Fund to assist the city with the project, and the Virginia Talent Accelerator Program, created by VEDP and the Virginia Community College System earlier this year, will provide training support for the center. The no-cost program, which will also assist in training employees for Morgan Olson LLC’s truck assembly line in Pittsylvania County, is geared toward providing specific, customized learning for companies creating significant numbers of jobs in Virginia.

“The greater Richmond region has emerged as a hub for leading biosciences companies, offering world-class education institutions, research assets and a pipeline of skilled talent, and GSK’s consumer health care joint venture and expansion will further its position as a powerhouse in this industry,” Northam said in prepared remarks.

Film based on interracial couple to be filmed in Virginia