Home News Getting the word out

Getting the word out

During the past decade, Liberty University has grown into the biggest college in Virginia, but that reality isn’t well known beyond the Lynchburg region, admits the school’s president, Jerry Falwell Jr.

He often has to spend the initial minutes of conversations with other university presidents and high school students in other parts of Virginia explaining how much Liberty has changed in recent years.

“People still tend to think of us as a small, Baptist college that’s mainly geared toward training church workers and pastors,” Falwell says, noting that business administration and psychology now are its most popular programs. “We’ve grown so much and so fast that the perception of who we are just hasn’t kept pace.”

Since 2005, enrollment at the 44-year-old educational institution has exploded, in large part because Liberty has been highly successful in combining  the hands-on experience of a residential program with the easy access and revenue generating potential of online education. In fall 2015, the university had a total of nearly 80,500 students, with just over 66,000 online and nearly 14, 500 on the Lynchburg campus.  Nearly 35,000 of those students were studying full time while more than 42,500 were part time. Liberty now offers more than 450 undergraduate, graduate and professional programs, including medicine, law, engineering, cinematic arts and aeronautics.

During the past 10 years, the school’s annual budget has jumped by nearly 450 percent, from $109 million to $591 million. Liberty’s financial team also has managed to accumulate cash reserves and endowments of more than $1.3 billion, which puts it financially on par with a number of Ivy League schools.

To better promote itself, the school will kick off a major national television advertising campaign in 2016.

“The dream here was always to create a world-class university for evangelical Christians, much like what Notre Dame is to Catholics, Brigham Young is to Mormons and Yeshiva is to Jewish students,” Falwell says. “We’ve essentially grown to become that, but we’ve still got a lot of work to do to make sure that we’re promoting that and getting the word out.”

Symbiotic relationship
For Lynchburg-area residents and businesses, it’s impossible to overlook Liberty’s transformation. That’s because the school’s explosive growth is “having a remarkable and demonstrative impact” on the city’s population, demographics, economy, culture and quality of life, according to a 2015 impact study by Richmond-based Mangum Economics.

The report estimates that Liberty generates more than $1 billion a year in economic activity for the Lynchburg area. That figure includes construction. The school is in the midst of a $500 million campus rebuild that has added, among other things, a $40 million Center for Medical and Health, 170,000-square-foot library, an ice rink, other athletic facilities and six, eight-story student residence halls.

With more than 8,300 faculty and staff, Liberty has surpassed Centra Health as the city’s largest and fastest-growing employer, according to Mangum. The report also notes that Lynchburg’s population between 2000 and 2010 grew at a 15.8 percent clip, faster than all but six independent Virginia cities. 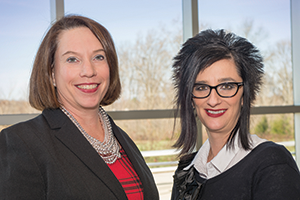 “I tell every business here and every organization considering moving here that they have to figure out how to ride the wave of what’s happening on that campus because we all benefit,” says Christine Kennedy, a Liberty alum who previously served as executive vice president of the Lynchburg Regional Chamber of Commerce. She now is chief operating officer and executive vice president of the Lynchburg Regional Business Alliance. “More students mean more opportunities for retail establishments and restaurants, and it means we have a more highly qualified workforce to draw from. It’s a ripple effect.”

The relationship is symbiotic. The Lynchburg region’s business community is going through its own transformation, and Liberty students have more career opportunities in the area than they’ve ever had before, according to Kennedy.

“In terms of opportunity for growth, we have a lot of elements coming together at the right time,” she says. “We’re really in the midst of a perfect storm.”
Those elements include a still relatively low cost of living and doing business, a downtown revitalization effort that finally is taking hold, access to a high-speed fiber pipeline that runs through the area and numerous site-ready development properties in the four counties surrounding Lynchburg.

In July, Lynchburg became the headquarters location of a New York Stock Exchange-traded company. That occurred when the Babcock and Wilcox Co. (B&W), which has long had a division in Lynchburg, decided to spin off its power generation business as BWX Technologies Inc. (BWXT). B&W remains based in Charlotte, N.C.

BWXT, which has 2,500 employees in Lynchburg and almost as many in  Ontario, is the sole manufacturer of nuclear reactors and other major components for the U.S. Navy’s submarines and aircraft carriers, as well as a supplier and repair and maintenance provider to the commercial nuclear power industry. BWXT also has a growing government services business, providing environmental remediation activities and facilities operations for the Department of Energy, NASA and other agencies.

“We have an extremely good business with a very large backlog, but it is a business that we believe that we can do more with and now we have the total focus to do that,” says John Fees, the executive chairman of BWXT.

“We’re not just acquiring businesses to add to our portfolio,” says Centra spokeswoman Diane M. Ludwig. “We chose these locations based on improved access, new services and programs and to improve our continuum of care.”

Lynchburg’s growing supply of health-care services meshes nicely with Liberty’s increasing enrollment of health-sciences students. Deanna Clark Britt is dean of Liberty’s nursing program, which has nearly 1,000 students. She estimates that 10 to 15 percent of her graduates, who complete 800 clinical hours at local medical facilities, end up taking jobs with Centra Health or other local health  organizations.

“From what I have heard from students, they see Lynchburg as a town that has a small-town feel but with the advantages of bigger-town resources,” Britt says. “They believe that this region would be a great place to settle down, begin a career and eventually raise a family.”
Becoming a tech hub

True IA, a Sterling-based cybersecurity firm, opened an office in downtown Lynchburg’s Riverviews Artspace in October  at the recommendation of two former Liberty students: Seth Wade, the company’s director of marketing and business development, and his brother, Nathaniel, who is vice president of cybersecurity. 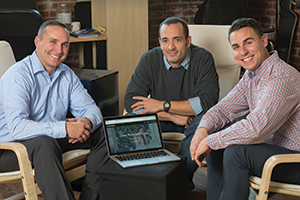 “I was very familiar with the area and what was happening here,” says Seth, a Lynchburg native and an Army veteran. “The company was looking to add new positions, and I said, ‘Look, if we put those positions in Lynchburg, we’re going to gain a number of things: We’re going to get at least a 30 percent better cost average on overhead, and we’d have easy access to some really talented people, not just the college students coming out of Liberty and other colleges in the region — but also people employed by regional Fortune 400 companies who want to stay in Lynchburg but want to try a different career challenge.’”

True IA holds prime contracts with the Department of Defense, the IRS and Washington Headquarters Services and is a subcontractor for major work with L3 Communications. The Lynchburg office has five full-time employees and five independent consultants and expects to add more full-time personnel over time.

Nathaniel, who served as a combat Marine in Iraq, says that the Lynchburg office focuses on increasing the company’s presence in Virginia and North Carolina and adding to its client list.

“A lot of our work and a lot of the dollars that come into this office are from outside the region, so that’s going to be an economic net gain for Lynchburg and bring in a lot of value,” he says.

Lynchburg added to its economic development toolbox last summer when it became the first Virginia city to receive the TechHire designation. This White House-led initiative will enable local employers and schools to compete for $100 million in grants to support accelerated learning for low-skill workers.

True IA, which offers a series of online cybersecurity courses, will apply for TechHire funds, as will Sharptop Co., a small software programmer and training firm also located downtown.

Sharptop partners with companies to build websites and computing and mobile applications. Beginning in 2016, it also will offer software and Web development “boot camps.” Sharptop’s founder is Tony Erskine, an Army veteran who also has a Liberty connection. He took a number of Liberty’s online classes and later worked for the university’s IT development office.

Erskine and the Wade brothers plan to collaborate on projects and hope to play a role in boosting the city’s reputation as a hub for STEM education and entrepreneurship.

“We want to build the Lynchburg economy and ecosystem, be a great partner to Lynchburg-area businesses and help make it a little easier for those trying to start companies by providing those businesses with great applications and solutions,” Erskine says. “We’re not a Christian company, but we are a company of Christians, and we want to make sure that we’re pleasing God in everything that we do.”

The merger will provide a larger regional voice and promote better strategic collaboration, says Megan Lucas, former CEO of Region 2000, who is now president and CEO of the new organization.  “We’re not merging because we have to. We’re merging because it’s the right thing for our community,” she says. “We’re all much stronger operating together than in silos.”

With a combined budget of $1.4 million, the Lynchburg Regional Business Alliance plans to boost economic development spending by 124 percent to create a global brand for the region. For example, it will run commercials during Liberty athletic events on ESPN and other networks.

“Because of Liberty and all that’s happening here, we’re getting more international exposure than ever, but we need to capitalize on that,” Lucas says. “We have everything we need to attract great businesses and great employees. We just need to do a better job of telling our story.”