The places in Virginia without broadband aren’t hard to find. Just look for mountains or two-lane roads or lots of trees, any place without rooftops. Southwest Virginia, definitely. Big swaths of Central and Southern Virginia and the counties west of the Hampton Roads region, along with parts of Virginia’s Eastern Shore.

It’s been clear for years that the telecoms aren’t going to build there because they could never find enough customers to make a profit. So, now the hunt is on, with some success, to find just enough public dollars to get these places wired. It’s a big deal for local economies, which can’t recruit or grow companies without internet access. Schools and hospitals also suffer in isolation.

Gov. Ralph Northam has launched an effort to make broadband service available to all who want it. But the details — the amount of funding and how it will be spent — aren’t yet known. In the meantime, localities and private-sector businesses are working what deals they can.

There is progress being made, such as the Central Virginia Electric Cooperative’s (CVEC) project to build a broadband network in its 14-county region. Co-ops in Virginia and around the U.S. have been getting a lot of traction in expanding broadband into unserved areas because the co-ops already have built and maintained infrastructure. Oftentimes, providing broadband service is just a matter of adding new fiber.

“We’re used to being out here in the terrain in low-population areas,” says Gary Wood, CVEC’s president. “And we’re used to low margins.  We don’t have to return a 20 percent margin.” 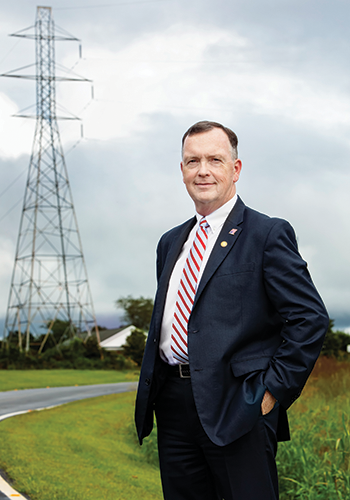 Wood says electric co-ops are a good match for rural broadband projects. For one, co-ops have been building and maintaining utility infrastructures in rural areas for decades. The same poles that carry electric wires also can carry broadband. “So, it works for us, where it’s more difficult for the investor-owned, private companies,” Wood says.

Plus, the co-ops have a need for a broadband network, too. CVEC has substations and pieces of equipment in areas without cellphone service. “If we had communication with them, it would improve our reliability and efficiency,” he says.

CVEC has 37,000 customer accounts — 90 percent of which are residential —  in the counties it serves. The co-op has 4,600 miles of overhead and underground lines.

Co-ops aren’t allowed to sell internet services, Wood says, but they can create subsidiaries to do that. CVEC’s subsidiary is called Firefly Broadband.

CVEC’s service area stretches from around Appomattox and Farmville at its southern boundary north into Orange County. The co-op will build the fiber network and then lease it to its subsidiary. Those lease payments will cover the cost of the network.

So, customers who buy broadband services will be providing the revenue for those lease payments, while co-op members won’t bear the cost, Wood says.

Getting outside support — grants and so on — is part of the formula. A feasibility study for the $110 million project showed it would take 11 years for the subsidiary to break even. “You really can’t ask a Verizon or Comcast to wait 11 years to turn a profit,” Wood says.

Developing a plan
In July, Northam announced the appointment of Evan Feinman, executive director of the Virginia Tobacco Region Revitalization Commission, as chief broadband adviser. Feinman is assigned to “develop a plan to get broadband to every single Virginian as soon as possible,” said Northam in announcing the project at the Laurel Grove Volunteer Fire and Rescue in Pittsylvania County’s Sutherlin community. Courtney Dozier, chief deputy with the Virginia Department of Housing and Community Development (DHCD), was named deputy adviser.

“We’ve been working on this since the beginning of the administration,” Feinman says. In announcing his plan, Northam framed the problem as quite serious but said it could take up to 10 years to make broadband available to everyone who wants it. Feinman says that’s “an achievable goal, provided the General Assembly steps up and shows the political will to get it done. And we have confidence that they will.”

One funding increase happened in this year’s session, when the General Assembly increased funding over the next two years for expanding broadband from a total of $2 million to $8 million.

That grant money, handled by the DHCD through a program called the Virginia Telecommunication Initiative (VATI), is intended to help private-sector providers and local government entities with the cost of constructing broadband infrastructure in unserved areas. Priority is given to projects that will be owned and operated by a private-sector co-applicant.

Over the years, the tobacco commission has put money up as well. In March, it approved grants totaling more than  $11 million for nine projects. The biggest grant is $3.5 million to a project involving Comcast and Bedford County.

The project began after a survey of residents and businesses in the southern part of the county showed an appetite for broadband access, according to DHCD. Comcast said it couldn’t afford the project on its own, so the county and the company sought the grant, originally asking for $4 million.

Ray LaMura, the trade group’s president, says cost is an issue for private- and public-sector efforts, and the risk of financial failure is high, too. “It’s expensive to deploy broadband. It’s not like water and sewer; not everyone has to take the service,” he says.

Another VCTA argument is that the public sector isn’t very good at running these kinds of networks. That’s why partnerships are best, LaMura says. “Localities or co-ops have the infrastructure, but then you have us with the expertise.”

There are good examples of where these partnerships are working, he says. Gloucester County, for example, got a $193,000 grant from the VATI fund and partnered with Cox Communications to expand its fiber-optic network. Cox said it invested $140,000 in the extension. There also is a partnership launched in 2016 between Harrisonburg and Shentel, a telecommunications company based in Edinburg.

LaMura says the VATI fund and private-sector expertise also help localities deal with hurdles that are unfamiliar and expensive, such as laying fiber across railroad lines or over bridges. “We understand that there is a cost to do that,” he says. “We just don’t want excessive cost that kills a project. Because that’s what this fund is for, to make a project doable when previously it was not.”

What VCTA especially dislikes is municipal networks, such as the Bristol Virginia Utilities Authority (BVU) effort, begun in 2001 to build and operate a broadband network, called OptiNet. It’s one of LaMura’s favorite examples of what not to do. “It’s a sad situation,” he says.

A 2016 review by Virginia’s Auditor of Public Accounts found that,  “The BVU Authority’s OptiNet Division has a potential going concern issue, as it appears that they do not have the resources to continue operating without cross-subsidization [with revenue from other BVU services], which the Code of Virginia prohibits.” That review came after a U.S. Department of Justice corruption investigation, begun in 2013, resulted in the convictions of several senior managers at BVU, including its former CEO.

In 2016, Sunset Digital Communications announced it was buying OptiNet from the BVU for $50 million. The deal wasn’t finalized until this summer.

LaMura’s criticism of public-sector efforts, however, isn’t limited to examples of mismanagement. He objects to any public effort to compete with the private sector. Roanoke launched a regional network in 2016 with support from other municipalities, LaMura notes. “It is very frustrating,” he says.

So, VCTA will push for public subsidies that support private-sector expansions into unserved areas. But others say the rural areas have waited long enough. The Virginia Association of Counties (VACo) is joining the discussion. Sherrin C. Alsop, VACo’s president, is a member of the King and Queen County Board of Supervisors. The county grew tired of waiting for private-sector investment, she says. “That’s why we said, if we want it, we’re going to have to do it ourselves.”

The county spent its own money to install broadband access, building on top of its existing public safety radio communications network, she says. But VACo supports more funding for the VATI fund and a new revolving loan fund with no local-match requirements. VACo sent a 27-page plan to the governor in May.

One of the key voices in the General Assembly on broadband legislation is Del. Kathy Byron, R-Bedford. She supports more funding for the VATI grant program, noting that it directs that money to unserved areas. “Nobody has a crystal ball on what’s going to come out of the General Assembly this session,” she says. “I think this should be a priority just like any other economic development project and that we should continue to increase funding to public-private partnerships.”
FCC grants

The federal government has made a change in one of its funding programs and now is pumping a lot of new money into broadband. In August, the Federal Communications Commission announced nearly $1.5 billion for projects around the country with the goal of expanding broadband access. The money comes from the FCC’s Connect America Fund auction. The money will be distributed over a 10-year period. Among the recipients are four electric cooperatives from Virginia, including the CVEC. The others are BARC Electric Cooperative, Prince George Electric Cooperative and Mecklenburg Electric Cooperative. 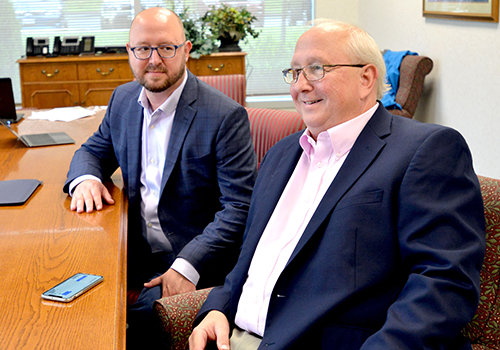 Sunset Digital, the purchaser of the OptiNet system, will get $29.5 million over 10 years from the FCC, says Paul Elswick, the company’s president and CEO. The FCC has long subsidized rural telephone service, and this time the agency is devoting funds from that same funding program to rural broadband, he says.

Sunset bought the OptiNet system “because we wanted to grow the company.” Elswick estimates Sunset will hire another 50 people in the next 12 months, bringing total company employment up to around 160 people.

Elswick raises an interesting argument. If state and federal dollars start propping up private-sector projects — this rural broadband effort might find some traction.

“We’re in a paradigm shift for broadband in the nation,” he says. “People have always wanted to provide broadband in urban areas, and rural areas are the next market. We felt like this was a growth opportunity.”

Employees have the ear of Knight Point’s executive team 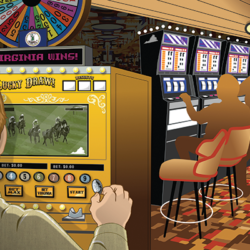 Is sports betting headed to Virginia?