Home News Getting back on track

Getting back on track

Major projects are going up while industry struggles to find enough workers.

From the construction cranes at Tysons to a billion-dollar power station in Southern Virginia, major construction projects are in the works across Virginia. In addition, contractors are optimistic that more work could materialize under the administration of President Donald Trump. Before taking office in January, Trump was a billionaire commercial real estate developer with properties around the world.

Gordon Dixon, CEO of the Associated General Contractors of Virginia (AGCVA), says members “are cautiously optimistic … the growth is potentially there” from Trump-driven federal spending and the generally improving economy. Since coming out of the recession, Will Karbach, CEO of The Branch Group in Roanoke, says the average project size that his firm competes for has “increased significantly. What we’re seeing … are pretty healthy pipelines of work. It’s strong, we think, particularly for the next year.”

While the industry waits to see if Trump’s promises of as much as a trillion dollars in new investment in public infrastructure pan out, the Waterside District in Norfolk is crawling with construction workers. They have been brought in by The Cordish Cos., the Baltimore-based company in charge of the overhaul of one of downtown Norfolk’s best-known attractions. “We’re in full construction mode right now,” says Glenn Sutch, president of the Waterside District. 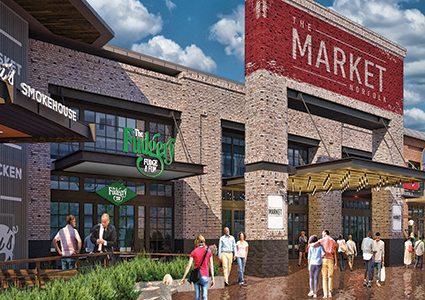 The $40 million, 125,000-square-foot redo of the old Waterside Festival Marketplace into a dining and entertainment venue broke ground in mid-2015.  The mixed-use development with restaurants, live entertainment and views of the Elizabeth River is expected to open in April. It will eventually employ about 1,000 people and is keeping a lot of subcontractors busy. “We have local plumbers, local electricians,” Sutch says.

The project is good news for the region’s construction sector, an area that took big hits in recent years.  Dixon says the 2007-09 recession and ongoing cuts in federal spending in Virginia slowed construction activity.  “So much of Virginia’s economy has been in the past reliant on the federal government, and that’s drying up,” he says. Another major head wind is finding workers. “The discussions I hear amongst our members and their subcontractors is, they are having a hard time filling the job requirements. A lot of guys don’t have the workers to bid on certain projects,” he says.

AGCVA is making a concerted effort to try to rebuild a pipeline of trained workers. That effort includes pushing for state funding for workforce development training and marketing “to convince people that construction is a viable career,” says Dixon. The demand for skilled workers is likely to drive up wages and make projects more expensive, but contractors really don’t have a choice. “There’s a lot of competition out there for workers,” he says.

As Karbach of The Branch Group observes,  “The industry lost a lot of people in the downturn, and they didn’t come back. There’s generally a shortage of not just qualified people, but people.”

Virginia now has about 188,500 people employed in construction, down from a prerecession peak of 252,500. That’s a 25 percent difference while nationally the current average difference from peak employment is 13 percent, according to Simonson.  “So Virginia’s really slow to recover,” he says.

Despite the labor squeeze, big projects are moving forward. While Sutch’s group works to fill spaces in Waterside District, it already has leased space to more than a half-dozen tenants, including Rappahannock Oyster Co., Guy Fieri’s Smokehouse and The Fudgery. They’ll be located in a part of the project called The Market, which will have 30,000 square feet of space for restaurants and other dining options.

Besides the Waterside renovation, downtown Norfolk also looks forward to this spring’s opening of The Main. The mixed-use development a few blocks away will include a conference center, a 300-room Hilton hotel, and entertainment and dining.  “There’s a lot going on right now; it’s pretty great,” Sutch says. 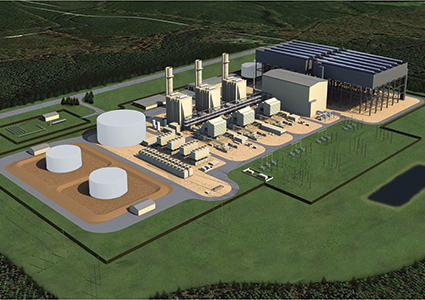 One of the largest projects under construction in Virginia is the $1.3 billion Greensville County Power Station. Dominion Virginia Power broke ground in June on its new natural gas-combined cycle power station, which should be operational in 2018. It’s located on a 1,143-acre site that straddles Greensville and Brunswick counties.  When complete, the station is expected to produce enough power for 400,000 homes.

Paul Koonce, CEO of Dominion’s Generation Group, said during the station’s groundbreaking ceremony that it would be the largest and the cleanest-burning gas-fired plant in the country. For contractors in the region, the project means jobs. At the end of 2016, there were about 700 workers on-site, and at the peak of construction there will be about 1,200, according to Dominion. When the station becomes operational, it will have about 45 employees. The counties expect to see some benefits, with Greensville getting about $8 million in property tax revenue from the station’s first year of operation.

Construction projects frequently serve as economic development drivers, and that’s why localities are glad to get them. Downtown Richmond is in the midst of a project that should bring more people to the city.  A $90 million facelift for Main Street Station will renovate the train shed.  Started in 2014, the first phase of the project is scheduled to be finished this summer. Most of the funding comes from federal sources.

The next step will be site work, and that project is being bid. It will involve developing various transit access points for buses, vehicles and pedestrians, and accessories such as charging stations for electric-powered vehicles, along with bike storage. The goal is “to make this a working multimodal transportation center,” says Jeannie Welliver, project development manager for the city. The project employs about 150 workers. It’s also designed to be a hub for retailers with about 20,500 square feet eventually available for lease.