With a major airline partner and daily connections to two of the nation’s busiest hubs, Shenandoah Valley Regional Airport is spreading its wings.

The regional airport in Weyers Cave now offers nonstop service to and from Chicago O’Hare and Washington Dulles International airports aboard United Express, putting local travelers within reach of hundreds of domestic and international destinations and bringing the valley closer to the world.

The service, operated by SkyWest Airlines, launched to great fanfare during a ceremony in April that drew area government officials, business leaders and residents. The first United Express 50-seat Bombardier CRJ200 jet touched down at 7:15 that evening en route from Chicago and departed an hour later bound for Dulles.

In his remarks, Gerald Garber, chairman of the Shenandoah Valley Regional Airport Commission, said the partnership with United and SkyWest is 30 years in the making. “This is a once-in-a-lifetime chance,” he said at the event.“We need to get this right.”

If the numbers are any indication, the partnership has accomplished just that. 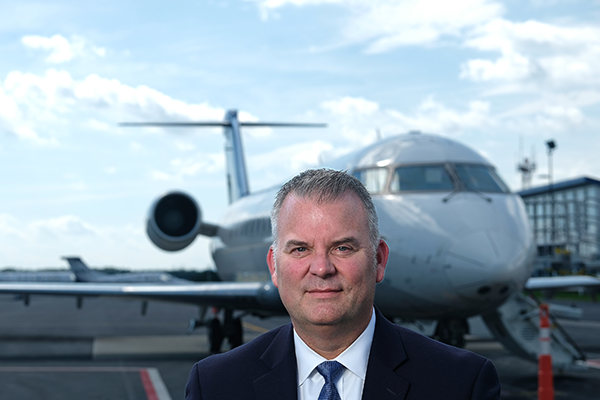 Passenger traffic at Shenandoah Valley Regional Airport in the last six months has been strong, according to executive director Greg Campbell. “United and SkyWest have done a great job,” he says. “We’re seeing significant increases over what the airport has seen before.”

SkyWest operates more than two dozen inbound and outbound flights per week between Weyers Cave and United’s hubs at O’Hare and Dulles. In May, its first full month of service, the carrier served approximately 2,100 passengers, a 50 percent increase over the 1,400 people who used the service in April. Passenger traffic steadily increased over the summer, nearing 3,000 in August.

Travelers can move through the terminal in Weyers Cave quickly, and the facility applies the same federal Transportation Security Administration standards as large metropolitan airports. Parking is free; there are three rental car kiosks located inside the terminal; and shuttle service is available for guests of the new Hotel Madison and Shenandoah Valley Conference Center at James Madison University.

Campbell says that, as word continues to spread about the reliability of the service, he expects traffic to continue to increase throughout the fall and into next year.

Shenandoah Valley Regional Airport’s evolution from a general aviation facility to commercial air service has not been without some turbulence. The airport cut ties with its previous partner, Via Air, in 2017 after only 18 months, in response to numerous flight delays and cancellations. Before that, the airport was served by Silver Airways for four years. Both of the Florida-based regional carriers were impacted by a nationwide pilot shortage.

Officials, however, believe they have found the right partner in SkyWest. The Utah-based affiliate airline operates more than 2,000 flights per day nationwide for United, Delta Air Lines, American Airlines and Alaska Airlines.

The service also promises to bring more visitors to the valley and help boost economic development in the region.

“They hear about our location and our transportation assets,” she says. “What had been missing there [until recently] was quality, reliable air service. So, now to have that in our fold is significant for our efforts.”

In August, Chenery announced she was stepping down as executive director to begin a consulting business and devote more time to her 1-year-old daughter. Jay A. Langston, a Virginia Economic Development Partnership official, will succeed her in December.

Cybersecurity program
Just as commercial air service is taking off in the Shenandoah Valley, so too is the field of cybersecurity. 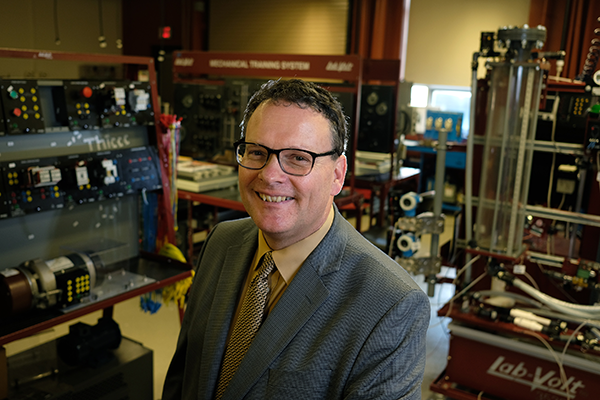 The $200,000 public-private initiative is being funded by GO Virginia — a state grant program designed to encourage regional economic development collaboration and diversification — along with matching cash and in-kind investments from Harrisonburg and Waynesboro, BRCC and InnovateTech, a private cybersecurity firm in the region.

“I think almost every business now has to be aware of and address cybersecurity in some way,” says BRCC President John Downey. “I think what this will mean for the region is a greater number of trained, skilled technicians that can help local companies be prepared with cybersecurity. That’s the big win for the region.”

The overall goal of the cybersecurity workforce development program is to create at least 50 candidates for entry-level cybersecurity analyst positions within two years. The average annual salary for these positions is $53,641.

Harrisonburg and Waynesboro believe businesses in their communities will benefit from the training.

“Harrisonburg has been targeting information-technology and information-security for well over five years now and recognizes that we need a talent pipeline in place to fill jobs when they become available,” says Brian Shull, the city’s economic development director. “This training program will certainly help provide that talent pipeline.”

Greg Hitchin, Waynesboro’s director of economic development and tourism, sees a similar benefit for the city’s economic development growth opportunities. “By partnering on this initiative, we are solidifying our interest in a high-wage industry that will graduate skilled, certified technicians in a high-demand marketplace — a positive outcome for both area students and businesses,” he says.

Corporate moves
The region’s transportation infrastructure, including its proximity to major interstates and access to the Port of Virginia, has helped the valley attract several multimillion-dollar corporate locations and expansions in recent months.

InterChange Cold Storage is building a 250,0000-square-foot facility in Rockingham County to provide cold-chain warehousing and value-added services to the region’s food and beverage industry. The $41.6 million investment is expected to create 88 jobs.

Road improvements and new rail service to the site will connect the InterChange facility to area manufacturers and the Port of Virginia, enhancing the potential for exporting the region’s food products overseas. The facility also will offer blast freezing for the poultry industry.

Sumitomo Machinery Corp. of America is investing in new machinery at its manufacturing operation in Augusta County. The company, a subsidiary of one of the largest heavy machinery manufacturers in Japan, will purchase new 10- and 20-ton overhead cranes, a new paint booth, an automatic storage retrieval system, and new assembly workstations. Sumitomo recently built a 72,000-square-foot facility adjacent to its former location in the Mill Place Commerce Park.

NIBCO Inc., a manufacturer of copper valves, fittings and flow-control products, is investing $14 million to expand its operations in Augusta County. The company is adding equipment and updating technology, training programs and new product development at its Stuarts Draft facility, which opened in 1969. The project will create 30 new jobs, while retaining 117 existing employees who will be retrained on the new technology.

In Frederick County, Amazon has opened a 1-million-square-foot e-commerce facility that soon will employ more than 1,000 workers. The facility is intended to help the online retailer improve distribution to mid-Atlantic markets. The county’s permit review team collaborated with Amazon and the developer to meet a nine-month occupancy deadline.

“The Shenandoah Valley Regional Airport has the potential to be one of the biggest drivers of economic development in this region,” Robinson says.