Front doors to the future

At 173 acres or so in downtown Richmond, the campus of Virginia Commonwealth University is smaller than the average Virginia farm (181 acres).

Now, plow a portion of 31,000 students, more than 23,000 employees and 2,500 full-time faculty members into the mix (not to mention a daily river of visitors, passersby, vendors and other city denizens), and you can see that sometimes even crossing the street could be a problem.

Which is why being able to walk safely across campus streets is one of the priorities spelled out in the university’s new master plan, the latest in a series of plans since VCU was created in 1968 after the General Assembly merged Richmond Professional Institute (RPI) with the Medical College of Virginia (MCV).

The notion of pedestrian safety is especially heightened on the MCV campus, where patients and their families are often on foot navigating streets and sidewalks on their way to treatment, the plan says. (During the 2018-19 school year, there were 47 accidents involving pedestrians at VCU, up from 29 the previous year.)

This is the first master plan in VCU’s history to set a unified vision for all of its properties  — everything from parking lots to hospitals to student housing — on the medical campus and the former RPI campus, now known as the Monroe Park Campus. One goal is to unify the campuses as never before, with increased joint programming and transportation links, among other initiatives.

Open doors
Many college campuses have grand gates marking their entrances. You couldn’t miss them if you tried. That’s not the case at VCU, however.

In fact, VCU’s master plan came up with an easier way to find the university’s front door — creating more than one. 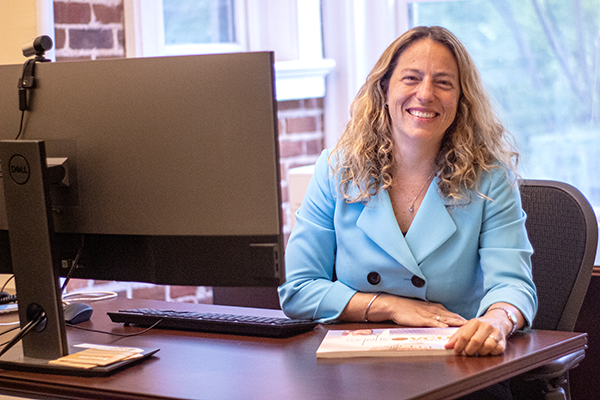 “Our campuses [MCV and Monroe Park] are very porous and blend into the fabric of the city, and we like it that way,” says VCU Vice President for Administration Meredith Weiss, who helped oversee the master plan.

“Suburban and rural universities may have just a few entrances into campus, but we have dozens. The ‘Front Doors’ effort identified the major entrances into our campuses (both vehicular and pedestrian) and identified design solutions to let people know when they are on campus, without separating us from the city,” Weiss adds.

Over the summer, construction pushed ahead on the university’s first two “Front Doors” projects at Franklin and Shafer streets and Main and Linden streets. The Front Doors will make entering and crossing the campus safer and more walkable, Weiss explains.

ONE VCU
VCU’s master plan incorporates all the goals you might expect any university to have: student success, national prominence and diversity.

And, with its well-known health system, VCU has a laser focus on providing health care at a high level to a region of nearly 1.3 million people.

While VCU has been in business for 51 years as a merged institution, the new master plan — labeled “ONE VCU” — marks the first time that the public research university side of the merger and the VCU Health System, borne out of the Medical College of Virginia, are cooperating on a master plan as part of a shared vision. The university’s board of visitors approved the master plan in March.

In a highly compact, densely populated urban campus like VCU’s, land is everything, and the cooperative master plan acknowledges that reality.

“It highlights the importance of working collaboratively to find the highest and best use of land on each campus to further the mission of VCU,” Weiss says.

As an example of this newly minted collaboration, the VCU administrator pointed to a university-owned surface parking lot, which VCU sold to the Health System. The health system, in turn, will construct a parking deck on the site to address the critical parking shortage for employees on VCU’s MCV Campus.

Parking in any urban environment can be a headache, and it’s no different on the VCU campus.

As the ONE VCU master plan was being developed over a year and a half, a parallel study was underway to determine the university’s parking needs.

The study found that VCU had an inventory of 12,370 parking spaces and leased an additional 2,550. 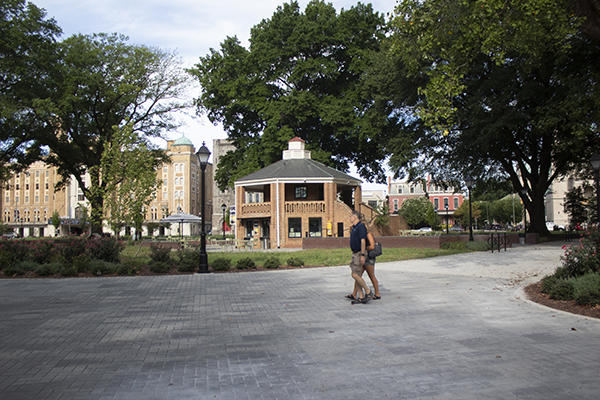 It also determined that while the university’s Monroe Park Campus had enough parking to meet future demands, the MCV Campus required an additional 2,700 parking spaces.

Part of that need will be filled by a more-than-1,000-space parking garage in the Health System’s new $349 million adult outpatient facility.

Overall, VCU’s goal is to increase the number of parking spots for patients and visitors on the MCV Campus from 980 to about 3,100.

VCU also is working closely with the city’s transit system to provide free bus service to students and employees over the next three years through a multimillion-dollar contract in the hope of getting more cars off campus and off the streets.

Dedicated bike lanes also are a priority, in conjunction with the city’s Bicycle Master Plan.

The city government, for example, opened a protected bike corridor that runs 15 blocks along Franklin Street from VCU’s Monroe Park Campus to the State Capitol.

The university’s growth has in­­creased the number of vehicles entering and leaving the campus on a daily basis, further contributing to congestion, says Larry Little, vice president of support services and planning for the VCU Health System.

“What we’re trying to create on the medical side for the first time is almost like a ring road, where we put our services, or a lot of our services, on the corners of our campus so that folks can go there, park there, leave there and they don’t have to come through the middle of campus,” Little says.

In addition to the adult outpatient facility, VCU Health System is also building a $350 million, inpatient children’s hospital on the MCV Campus that is expected to open in 2022.

Parks and an athletic village
On suburban and rural college campuses, green space is a given — long, rolling lawns, wide-open vistas, verdant viewsheds that stretch to infinity.

By contrast, VCU has a lot of hard surfaces.

To help mitigate the corridors of brick, glass and concrete, the ONE VCU master plan redefines the core of both the university’s campuses with additional green space.

“One of the things we heard on the MCV Campus is that people go down to the State Capitol when they need a little bit of a reprieve from the city or from their jobs, because it’s the closest large green space,” says Jeff Eastman, the university planner.

On the Monroe Park Campus, students have for years used — on a cooperative basis — the city-owned Monroe Park, which has just reopened after two years of renovation. The park is managed by a public-private partnership with directors nominated by the city’s mayor and VCU’s president.

Eastman says Monroe Park has served the university well over the years, but now VCU needs its own parklike green space so it can schedule programs without trying to juggle the demands of a city park.

VCU’s plans call for creating an “iconic” green space on the Monroe Park Campus between the existing Cabell Library and a new student commons and wellness center, as well as expanding a small park on the MCV Campus.

More on-campus housing along the Grace Street corridor is also part of the ONE VCU plan. Administrators say student demand calls for an additional 700 to 1,000 beds on campus.

Currently, only about 16% of the university’s 24,000 undergraduate students live in college-owned, -operated or -affiliated housing, according to the most recent survey by U.S. News & World Report.

Among other things, the master plan recommends further study on the creation of a residence for the university president — VCU currently has no presidential residence — and it envisions an athletic village that would accommodate a new tennis center, practice fields, a baseball stadium and field house.

While there is no mention in the master plan of where the athletic village might be located, Gov. Ralph Northam’s 2018-20 biennial budget gives VCU the right of first refusal on a 20-acre site on Hermitage Road, a few miles from the university. It’s currently occupied by the state Alcohol Beverage Control Authority, which plans to move its headquarters and warehouse to Hanover County by 2021.

In July, the state ABC closed an $8 million deal on a 40-acre site in Hanover County near the Interstate 295 and Pole Green Road interchange.  News reports have suggested that VCU is considering building its athletic village on the site of the former ABC headquarters, which also might include a new stadium for Richmond’s minor league baseball team, the Richmond Flying Squirrels.

But Pam Lepley,  VCU’s vice president for university relations, says, “There is nothing new to report since the budget was passed.”

STEM growth
On the Monroe Park Campus, the master plan calls for construction of a $121 million STEM (science, technology, engineering and mathematics) education building on the site of the existing Franklin Street Gym, which is slated for demolition in 2020.

The university’s fast-growing College of Engineering also is highlighted in the master plan.

A $93 million Engineering Research Building is currently under construction at the northeast corner of Cary and Belvidere streets in Richmond, with completion set for 2020.

The College of Engineering also is on track to grow to 2,000 students by 2020, a 39% increase over its enrollment in 2013, when Dean Barbara D. Boyan took over, outlining an aggressive agenda for growth.

Boyan had three goals: “Increase the number of students, increase the research profile and increase faculty. We’ve been able to do that,” she says.

Over the next five to six years, the College of Engineering plans to enroll 3,000 undergraduate students, the majority in computer science and computer engineering, aided by the construction of a new building dedicated to helping students train for the digital economy.

But like every other growth decision on the tightly packed VCU campus addressed in the university’s master plan, the College of Engineering will grow only if it makes the best use of the land that’s available, even if it means tearing up what’s already there.

Give a little, take a little.