Six hundred. That’s how many Advance Auto Parts employees are bidding adieu to their desks, cubicles, printers, water coolers and commutes in Roanoke, the city where the company was founded in 1932.

The giant auto parts retailer won’t be bringing back employees to its 275,288-square-foot office space at Crossroads Mall. They’ve all been working remotely for more than a year, during the pandemic. Why come back now? the company says.

“We came off one of the best years in our company history, and this year has started off as well, if not better,” he says. “It didn’t seem to make sense for our team members to be going into an office full time again.”

Advance also plans to close a smaller 9,668-square-foot office in Richmond, where 50 other employees will continue working remotely.

Advance is not alone in making this transition. After the pandemic sent people around the globe home to work from their dining room tables, couches or home offices for at least 15 months, companies are evaluating whether to return to an office space as America gradually reopens and more people receive COVID-19 vaccines.

Some Fortune 500 companies based in Virginia have already made decisions. Capital One Financial Corp. in Tysons notified workers in June that it would be moving to a hybrid work model, alternating between remote and in-person days. Richmond-based utility Dominion Energy Inc. is launching a one-year pilot program allowing eligible employees to work hybrid schedules. Henrico County-based Altria Group Inc. in Henrico County is allowing salaried employees to continue remote work. And Goochland County’s CarMax has said it will allow some workers to have hybrid schedules, while others will work remotely.

While many businesses may resume some level of in-person work, office spaces and the ways that companies use those spaces likely will not look the same as before the pandemic.

Across Virginia, commercial real estate brokers and representatives are working with office customers who have a plethora of new needs, sparked by the rise of remote or hybrid working options.

Some want less office space, while some want more in order for employees to spread out for social distancing. And still others want to create “hoteling” and “hot-desking” areas, which would allow for workers with flexible schedules to share common desks. Others are leaving the office behind altogether.

In large urban areas such as Northern Virginia, landlords are offering short-term leases and other incentives to entice businesses back to physical office spaces. Right now, office tenants are asking for shorter term leases rather than making 10-year commitments, says Joseph Farina, principal of the Washington, D.C., region for Divaris Real Estate Inc.

In New York City, some office landlords are lowering rents and even outfitting buildings with new restaurants and club-like dining, even including speakeasies, in order to make the return-to-office experience more attractive for tenants.

“Just a computer on a desk isn’t much of a draw,” says Farina, whose company’s Tysons office building recently added a fitness center.

The pandemic has changed the world of full-time work, and the office market may never look the same, some real estate executives say.

But with nearly 50% of the U.S. population fully vaccinated as of late June and most states dropping restrictions, some businesses are backpedaling as they perceive it to be safer to return to the office.

“The pandemic wore on and the cracks began to form around what was really beneficial about working from home versus what was detrimental,” Whelan says.

According to CBRE’s spring 2021 Occupier Survey of 185 U.S.-based companies, 41% of companies said they planned to return to offices by the third quarter of the year. Just 9% of companies reported that their office portfolios would become significantly smaller over the next three years. That’s compared with 39% of companies surveyed in September 2020. However, about 72% of the companies said they were planning for modest office space reductions this year, which was up from 45% last September.

Largely, companies continue to weigh their options, though. Office vacancy rates in Virginia rose during the first quarter of 2021, but rents rose or remained steady in most markets, according to the Virginia Realtors association.

At the end of 2020 and in early 2021, businesses started to consider and even make some decisions about what they would do with their office space.

“The fact that they were making decisions started to drive deals,” says Perry Frazer, executive vice president and principal at the Norfolk office of Colliers, a commercial real estate firm with offices throughout Virginia and the United States.

In some cases, these decisions may not be cost-driven, Whelan says. “They are not a lever you need to pull … from a profitability standpoint. It’s a lever you are pulling because of how your people work.”

Subleasing on a roll

Some of the changes in office space are evident from the increasing amounts of subleased space on the market as companies seek alternatives to paying for square footage that they no longer need.

For instance, as of late June, there were several 50,000- and 100,000-square-foot office locations available for sublease in Hampton Roads, which has never been a sublease market, Frazer says.

“Subleases tend to offer companies more flexibility,” Frazer says. “They are typically shorter-term leases. The reason that that works for tenants is [that] right now people are still uncertain on what … [their business model] will look like in two, three or four years.”

It’s working — at least in the Norfolk area.

In Richmond, CoStar Group, a Washington, D.C.-based commercial real estate analytics and information provider, took over approximately 51,000 square feet of office space at Riverfront Plaza, subletting from Mechanicsville-based Fortune 500 medical supply company Owens & Minor, which moved out of the space because of its increased number of remote-work employees.

The picture is similar in Northern Virginia.

“We’re seeing additional sublease space continue to come onto the market and tenants really still looking for more flexibility than they did, in the way of shorter-term leases, and assessing the hybrid work model versus pure telework,” Farina says.

Still, company decisions right now are all over the map, and at least some companies are appearing bullish on office space. For instance, in July, Massachusetts-based defense contractor Raytheon Technologies Corp. renewed its 521,000-square-foot, three-building lease at the former AOL headquarters campus at Loudoun County’s Pacific Park in Dulles.

In the past year, “we have helped just as many clients grow in new markets as we have downsized,” says Rett Turner, first vice president for Cushman & Wakefield | Thalhimer in Richmond.

Although Advance Auto Parts employees will no longer work five days a week in office buildings in Roanoke and Richmond, the company plans to retain a small area in its Roanoke location as collaboration space, Carr says. Employees can meet there to work on joint projects and for other in-person work needs.

The details about the new space are not yet known, because the company still is discussing logistics with its landlord, Carr says.

“The fields of cubicles will go away,” Cope says. “There will be some space that is shared by multiple employees. There will be more areas for people to come together during the day. You will see some private offices in that mix.”

These common, shared areas are known as huddle or hoteling spaces.

In the post-pandemic era, Whelan with CBRE estimates that people will spend about 3.2 days a week in the office and 1.8 days working elsewhere. That’s a 24% reduction in the time that people are spending in a physical office, compared with before the pandemic when people worked about 4.2 days a week in an office.

But that likely will not translate into a 24% reduction in office space, given the ways that people will continue to use offices going forward, she says. Even as corporate tenants continue to make decisions about how often employees will work from office buildings, they also must consider when their leases run out and about how many employees they expect to hire over the next several years, Whelan says.

“You might actually not be able to get rid of any space because of the head count that you’re bringing in,” she says.

A majority of respondents to CBRE’s Occupier Survey said they expect employees to be in the office at least half of their working time, if not more.

“The question is, how do we go from today’s environment and all of the sudden jump to whatever the new normal is going to be?” Whelan says. “That means you have to uproot the behaviors you formed over the last 15 months. Change management has to be done to really change that behavior.” 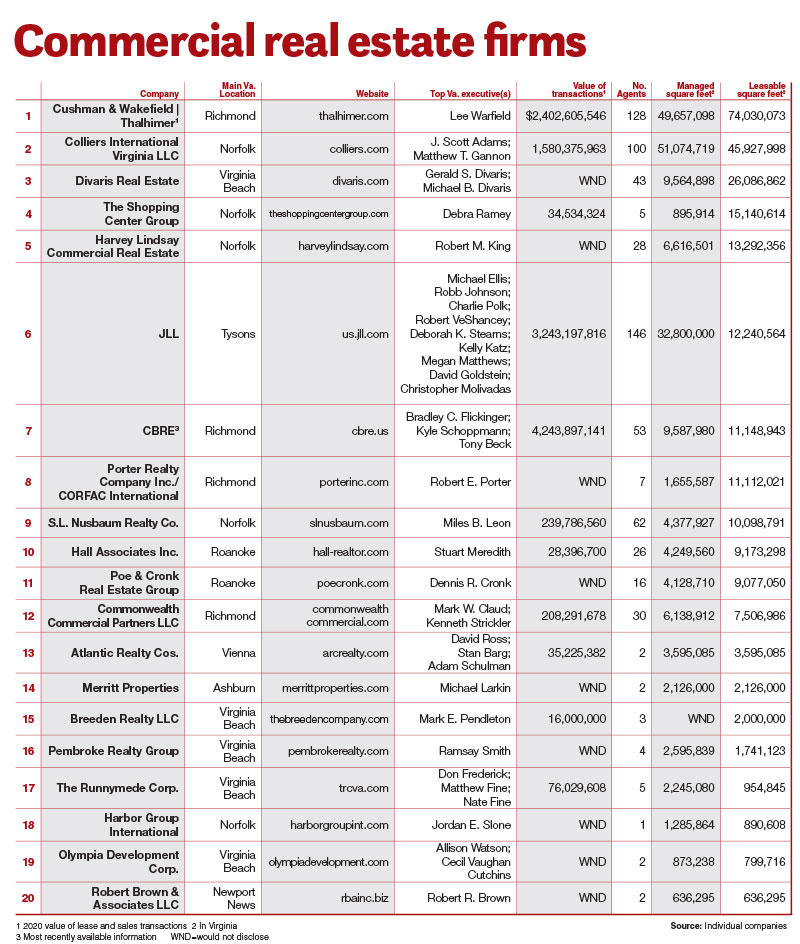 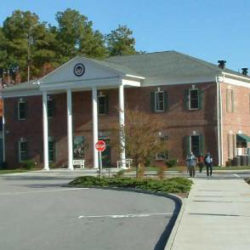 Enterprise Holdings is relocating and expanding operations in Newport News