Framatome Inc. President and CEO Gary Mignogna will retire July 1, and Chief Financial Officer Katherine Williams will succeed him, the Lynchburg-based nuclear reactor and fuel company announced Tuesday. Mignogna will become chairman of Framatome Inc.’s board upon his retirement.

Williams, who will continue to serve as CFO, has worked for Framatome, a French nuclear reactor company, for more than 20 years. She lived in Paris for seven years while with the company, and as CFO, she manages all Framatome’s financial activities in North America. Williams also serves on the Framatome Inc., Framatome Canada and Isogen boards. Framatome has 14,000 employees worldwide and 1,300 in Lynchburg. Its business includes designing and providing equipment, services and fuel for nuclear power plants.

Mignogna has worked for Framatome and its predecessor, Areva Inc., for 45 years, according to the company’s announcement. A mechanical engineer who earned degrees from Drexel University and an MBA from the University of Lynchburg, Mignogna became president and CEO of Framatome Inc. in 2014. In 2018, its North American headquarters moved from Charlotte, North Carolina, to Lynchburg.

“First, we congratulate Gary as he prepares to transition to a new role and we count on his continued support and counsel. His legacy of thoughtful leadership will be a tremendous asset as chair of the Framatome Inc. board of directors,” Frédéric Lelièvre, senior executive vice president and current chairman of the Framatome Inc. board, said in a statement. “I am confident that the strong leadership that has positioned Framatome as a leader in the U.S. market will continue under Katherine. Her two decades of service to this company exemplify our core values of performance, integrity and passion for the future of nuclear energy.” 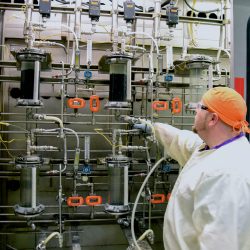