Relocations, expansions and government incentives gave commercial real estate a boost in the fourth quarter in Virginia, according to market reports of JLL.

In its year-end review, the commercial real estate services firm reports on vacancy rates and the major trends in office markets.  Here are a few highlights:

While large contractors continue to shed space in response to reduced government spending, some tenants are beginning to grow. Of the 23 largest leases signed in the fourth quarter, 12 were by growing mid-size tenants. The majority of these deals involved 20,000 to 30,000 square feet.

Overall, Northern Virginia’s total office vacancy rate stood at 19.9 percent in the fourth quarter.  According to JLL, incentives are driving the region’s largest leasing decisions. K2M, for example, received $850,000 from the commonwealth for its new 145,819-square-foot Leesburg headquarters. It was the second quarter in a row where the largest lease included a government incentive.

Expansionary leasing activity and subdued new construction helped lead a turnaround in District of Columbia. Growth among tech tenants — including Amazon.com, Google, Evolent Health and Cvent — contributed to more than 800,000 square feet of positive net absorption during the fourth quarter, the market's largest gain since early 2011.

The overall office vacancy rate was 12 percent.  At year's end, investment sales volume totaled $6 billion, also the highest amount since 2011 and proof that investors still are attracted to the nation’s capital city.

Approaching vacancies in the Class A inventory are putting pressure
on landlords to lower market rates and provide more aggressive concession packages.

The relocation of law firm McGuireWoods to the Gateway Plaza now under construction in downtown Richmond has been well known for the past four quarters. However, the announcement by another major law firm, LeClairRyan, to move its operations from Riverfront Plaza, a Class A office building, to SunTrust Tower, a Class B property in downtown’s central business district, put more Class A space on the market.  Plus, LeClairRyan’s relocation is set to occur in the same quarter next year as the delivery of Gateway Plaza, when McGuireWoods plans to vacate more than 240,000 square feet from One James Center, another Class A property.

At year-end, Richmond’s total office vacancy rate stood at 14.4 percent.   Relocations dominated leasing volume in 2014, totaling 522,974 square feet. One of the largest was McKesson’s decision to relocate from its headquarters in the Parham East submarket in Henrico County to one of the last remaining large blocks in the Innsbrook submarket in western Henrico.

This move will absorb 156,333 square feet of Class A inventory in the Northwest quadrant. However, SunTrust’s decision to close operations at Westmark One and shift personnel to other facilities will open an 80,000-square-foot block, a welcome development for large tenants seeking space in Richmond’s most popular suburban office market.

The region’s total office vacancy rate was 15.4 percent at the end of the fourth quarter. After completion of the Wells Fargo Center in 2010, which
pushed vacancy to peak rates in 2011, occupancy levels have slowly recovered. To improve competitiveness, developers and Norfolk officials began construction
on a Hyatt Hotel and convention center last spring.  Plus, Norfolk is moving forward with updated streetscapes and the new Waterside Live redevelopment. 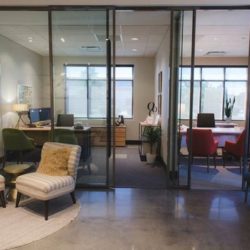 Construction begins on Radford’s College of Humanities and Behavioral Sciences