Billy Hupp, another family member who previously was vice president and COO, has transitioned to vice president of the board and corporate executive vice president. In an interview with Virginia Business on Wednesday, Webb Estes noted that being part of the fourth generation in a family-owned business “is a rare thing in this society today. It took a lot of hard work. I feel like I’m standing on the shoulders of giants.”

A William & Mary alumnus, Webb Estes joined the business about 15 years ago, starting as a truck driver and gradually gaining experience throughout the company, including running its IT department, human resources and customer engagement divisions before his recent promotion to president and COO. In 2020 and 2021, Estes Express Lines increased its workforce, mainly due to the increase in shipments and deliveries during the pandemic, and the company now has about 22,000 employees. Estes said that the less-than-truckload (LTL) company, which carries loads averaging about 1,200 pounds, has focused on worker retention, and its driver turnover rate has ranged between 12% and 15%, down from the LTL industry average of 22.5% in 2021.

Unlike long-haul truckers, Estes’ drivers typically can get home each night after work, a priority for the company, Estes said. Another priority is using more sustainable transportation methods; this year, the company will receive 12 electric trucks, which were ordered before the pandemic and will be used primarily for testing, and has recently purchased 300 electric forklifts. Also, Estes has partnered with Amazon.com Inc. and startup Remora, which produces a carbon-capture system for freight vehicles that is expected to arrive at Estes in February or March.

As for self-driving trucks, Estes says, “I don’t have a crystal ball,” but he is “all for technology” that makes drivers’ lives easier, such as routing technology that provides up-to-date traffic information and other data.

A Richmond resident, Webb Estes is a father of three “as of last Thursday,” and enjoys coaching his daughter’s soccer team. He also serves on the National Motor Freight Traffic Association Inc.’s Digital LTL Council.

Breeze Airways setting up base in Norfolk

Project to create 116 jobs, with flights out of Norfolk, Richmond 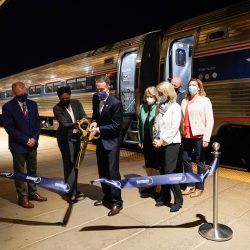