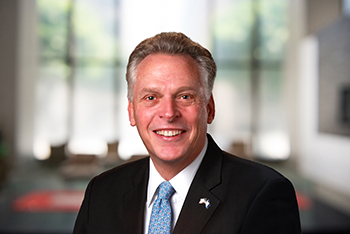 “Gov. McAuliffe brings a depth of understanding of global business, the challenges and opportunities facing it and emerging issues related to cybersecurity and privacy matters that is hard to match,” Wally Martinez, managing partner of Hunton Andrews Kurth, said in a statement released Tuesday. “His business acumen, coupled with his public service experience, will be very valuable for Hunton, the Centre for Information Policy Leadership and our clients.”

McAuliffe, who served as Virginia's governor from 2014 to 2018, will provide strategic counsel with a focus on cybersecurity and privacy issues and will aid in developing policy initiatives aimed at helping companies address and mitigate data security and privacy risks. He will also support the development of privacy principles that will facilitate the secure global exchange of digital information.

The former Virginia governor made cybersecurity a top priority during his tenure as chairman of the National Governors Association, and he was awarded the 2017 Technology Champion award from the National Association of State Chief Information Officers. Following his gubernatorial term, McAuliffe has served as a distinguished visiting professor at George Mason University's Schar School of Policy and Government, and he's been a frequent commentator on CNN. He's also released two books: “Beyond Charlottesville: Taking a Stand Against White Nationalism” and the political memoir “What A Party!”

“I am honored to be working with Hunton and CIPL on data protection and cybersecurity issues,” said McAuliffe. “Cyber risks are some of the most serious threats to our nation’s security. By 2020, 200 billion networked devices are expected to be connected across the globe. Domestic and foreign actors target sensitive information and systems that, if compromised, could have significant economic and political consequences for all Americans.”

Established by Hunton in 2001, the Centre for Information Policy Leadership works with industry leaders, regulatory authorities and policy makers to develop global solutions and best practices for privacy and data usage. In addition to its Washington, D.C., headquarters, it has offices in Brussels and London.