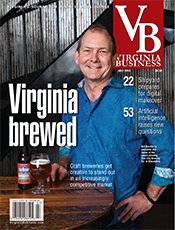 The Atlanta-based craft brewer moved into what had been the short-lived East Coast brewery of  California-based Green Flash Brewing Co.

“This was an opportunity that we couldn’t pass up,” Bob Powers, a New Realm co-founder, told Virginia Business.

New Realm made the winning bid for Green Flash’s equipment and has leased the 58,000-square-foot location, Powers says.

The Virginia Beach location can produce up to 40,000 barrels annually. It has a tasting room with 15 beers on tap and a 44,000-square-foot beer garden. A 400-seat restaurant is expected to open early next year.

Green Flash opened the Virginia Beach brewery in 2016 but closed it only 16 months later. A lender later foreclosed on the company, which was sold to new investors.

The Green Flash closing jolted Virginia’s craft beer industry, which is adjusting to slower growth after setting a soaring pace for several years.

Virginia Business examined the changes taking place in the industry in its July cover story. 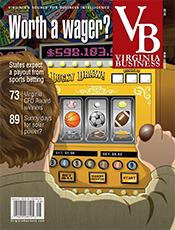 The new owners of Colonial Downs plan to open a casino-style gambling facility at the New Kent County racetrack next March.

The Richmond Times-Dispatch reported in September that the  renovation of Colonial Downs by Chicago-based Revolutionary Racing will include restaurants, bars and a doughnut shop.

The track has been closed since 2014. Its revival is the result of legislation passed by the General Assembly this year legalizing historical horse racing. The track will operate slots-like machines allowing bettors to make wagers on past races.

These machines will be installed on several floors at the track, which is expected to offer live horse racing again in fall 2019.

In its August cover story, Virginia Business looked at the prospects for expanded gambling in the commonwealth after a U.S. Supreme Court decision dramatically expanded legalized betting on all types of sports.