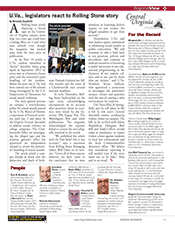 A University of Virginia fraternity plans to sue Rolling Stone magazine for a November story that depicted its house as the scene of a gang rape in 2012.

A statement by Phi Kappa Psi said it planned to “pursue all available legal action against the magazine.” The early April announcement followed the release of a scathing report by the Columbia Grad­uate School of Journalism on how the magazine handled the story, which has been retracted. Rolling Stone is­­­­­­s­­­­ued an apology but did not fire anyone connected to the article, “A Rape on Campus.”

The story created a firestorm of protest on the U.Va. campus, and the fraternity house was vandalized. The university suspended fraternity activities until January.

Charlottesville police reported in late March they could not find any evidence that the rape occurred.

Virginia Business reported on reaction to the Rolling Stone story in its January issue.  (Click image to read January story.) 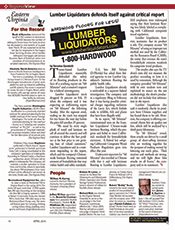 Toano-based Lumber Liquidators said in April that its March sales dropped 13 percent from the same month one year before.

Lumber Liquidators says its product is safe and has challenged the testing methods used by “60 Minutes.”   To reassure its customers, Lumber Liquidators offered home tests kits to anyone who purchased its Chinese-made laminate flooring. The company says about 10,000 customers had taken it up on the offer.

The magazine looked at the effects of the “60 Minutes” report on the company in the April issue. (Click image to read April story.)