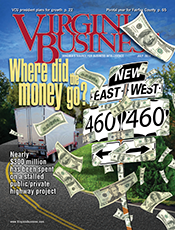 A review of plans for a new Route 460 by the Virginia Department of Transportation’s Assurance Compliance Division and the Office of the State Inspector General found that the commonwealth did not break any rules in pursuing a $1.4 billion, limited-access expressway.

Nonetheless, the review faulted a lack of transparency in plans for the 55-mile project to be constructed between Petersburg and Suffolk. The project’s risks were not communicated to the public and ‘key stakeholders” such as the Commonwealth Transportation Board.

The review also found that the administration of former Gov. Bob McDonnell set a very aggressive schedule for the road’s construction. The road was a high priority for McDonnell, who had championed the project since he served in the legislature.

The Route 460 project now is stalled because it has not obtained federal permits to build across wetlands. More than $300 million has been spent despite the fact no pavement has been laid.

Virginia Business scrutinized the twists and turns leading to the current dilemma in its July cover story. 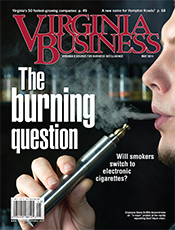 Tulsa, Okla.-based Palm Beach Vapors plans to open seven to 10 electronic cigarette stores in the Richmond area in the next year and a half.

The announcement is an indication of the growing interest among retailers in the use of electronic cigarettes.

Richmond-based Avail Vapor has expanded nine stores in Virginia and Maryland and recently bought a Chesterfield County building as its headquarters and production and distribution plant.

The FDA announced proposed regulations for electronic cigarettes in April.

Virginia Business looked at the growth of the e-cigarette business in its May cover story, including plans by Richmond-based Altria Group Inc. to roll out national sales of it MarkTen product.