“We were very careful to look in an unbiased objective way at each proposal that was made to us. That’s what our shareholders expect,” Squires said in an interview with Virginia Business. Squires was in Richmond Tuesday evening to address the Virginia Chamber of Commerce’s annual legislative awards banquet at The Jefferson Hotel.

Ultimately, Norfolk Southern’s board rejected three bid proposals made by the company over a six-month period. Squires said his management team and a group of outside advisers compared each of Canadian Pacific’s three bids to its strategic plan, determining that the bids undervalued the company and would be unlikely to receive regulatory approval.

“We concluded that the proposal was lacking in two ways,” Squires said. “First the value wasn’t adequate as compared to the value of our shareholders from our strategic plan. And secondly, the regulatory risks associated with the proposal were very significant. We did not see a path to regulatory approval of the transaction.”

Squires did not speculate on whether he thought there would be further consolidation in the railroad industry.

Norfolk Southern has continued implementing its strategic plan with a goal of saving the company $650 million annually by 2020. The plan includes many initiatives, including consolidating its operating regions from three to two, decreasing overtime, downgrading or deposing of underused lines, improving productivity measures and cutting 2,000 jobs, mostly through attrition.

The company accelerated its productivity plans this year, which were evident in its first-quarter results. While the company’s revenues were down on lower volumes, and there was a steep drop in coal revenues (23 percent compared with the same quarter a year ago), the company dramatically cut its expenses.

Revenues were down 6 percent to $2.4 billion for the quarter, but profit was up 25 percent to $387 million.

“We had a very good first quarter. We were able to reduce spending even more and that led to some pretty substantial margin improvement,” Squires said. “We did accelerate some of the productivity savings that we had projected for the full year into the first quarter.”

The railroad industry is in the midst of a tough economic climate. Volumes on almost all commodities are down, particularly in the coal industry.

“We think we can manage merchandise shipments around GDP growth,” says Squires. “Our intermodal business should grow even better than GDP as we take share from the highways.”

Each railcar can take 300 trucks off the highway, Squires said.

“We want to help relieve highway congestion,” Squires said.  “That’s one of the reasons we invested so heavily in intermodal the last few years. We’re determined to continue pursuing increased volume from migration of freight from road to rail.”

The company also has spent significant time improving customer service levels, which Squires said had lagged in 2014 and 2015.

“When the operation is running smoothly it sheds costs naturally,” Squires said. “An efficient network is also a cost effective network…Another thing that’s so important about maintaining a high level of network performance and customer service is that’s a platform for growth. That’s how we plan to continue to attract more business.”

Squires used his address to the Virginia Chamber of Commerce to thank legislators for their support of a $350 million bond issue for the Port of Virginia. The money will be used to expand capacity at the port’s largest terminal – Norfolk International Terminals, or NIT.

Norfolk Southern, which provides on-dock rail at NIT, opened the Heartland Corridor in 2010, creating a direct route for double-stacked container trains from Norfolk to the Midwest.

The chamber released its annual 2016 Legislative Report Card Tuesday. The report card grades legislators on “support of pro-business policies” during the 2016 legislative session.

Now in its fifth year, the 2016 legislative report card includes for the first time legislators’ lifetime grades along with their grades for the most recent legislative session.

Del. Steve Landes, R-Weyers Cave, was named the 2016 Legislator of the Year.

The following legislators are also recognized for their leadership in specific areas. A full list winners can be viewed at the Virginia Chamber of Commerce’s website. 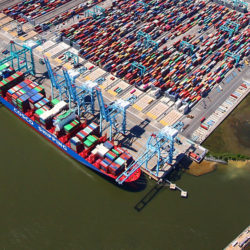 Will telework replace the office?

Will telework replace the office?