Julian Nebreda will take over Arlington energy unicorn on Sept. 1

Nebrada succeeds Manuel Pérez Dubuc, who will step down on Aug. 31. Nebreda has been a Fluence board member since September 2021 and was most recently executive vice president and president of U.S. & Global Business Lines for Arlington-based Fortune 500 energy company AES Corp., a role in which he was responsible for the growth of AES’ renewables in the U.S.

AES co-founded Fluence as a joint venture with global industrial manufacturing conglomerate Siemens AG in 2018. Valued at more than $1 billion, the unicorn company launched its initial public offering in October 2021 and is on track to post fiscal 2022 revenue of $1.1 billion. Fluence announced late last year that the Qatar Investment Authority would invest $125 million in the company, with AES and Siemens retaining approximately 44% shares each of the company.

Fluence specializes in energy storage technology and associated services and solutions to complement renewable energy projects such as wind and solar farms. Its products include an artificial intelligence-driven technology platform for managing and bidding on energy assets. The company has 4,800 megawatts of energy storage across 185 storage projects deployed, under contract or under management in 30 markets worldwide.

“I am honored to lead Fluence into the next phase of its maturity and growth,” Nebreda said in a statement. “The potential of this company is tremendous and Fluence is well positioned to capitalize on the broader energy transition. As we take Fluence to the next level of success, we will focus on delivering sustainable profitability, while continuing to capture the growth offered by our young industry.” 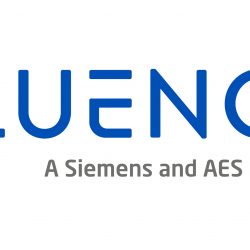 Shares were priced starting at $28 each