The Steward School campus in Henrico County looks a bit different this year. With five mobile classrooms, a tent on the patio and masked faces, the school has noticeably adapted to the demands of teaching students amid a pandemic.

“In a lot of ways, we’ve gotten somewhat back to normal,” Head of School Dan Frank says, “but we do have some limitations about buses [and] we continue to need the learning cottages [mobile classrooms] because of class size limits and, of course, we’re masked, per the mandate.”

Like other private schools in Virginia, Steward incurred steep costs installing Plexiglas and other infrastructure to combat the spread of COVID-19 but says it has comfortably covered expenses due to recent enrollment increases.

School administrators attribute the enrollment increases to families seeking more stability for children who have had their education disrupted by remote and hybrid learning over the past 20 months.

Despite state law requiring public schools to offer in-person instruction to the fullest extent possible since March, private schools have been more likely to hold in-person classes since fall 2020, although state health officials have recorded coronavirus outbreaks at schools since then. In March, the Centers for Disease Control and Prevention reduced the recommended distance between students from six feet to three feet, which allowed private schools to increase enrollment.

As of early October, only children ages 12 and older were eligible to receive COVID vaccines, and the Virginia Department of Health recorded outbreaks in progress — meaning at least two positive cases — at schools in 20 counties at both private and public institutions since the start of the 2021-22 school year.

Nationally and in Virginia, applications to private schools have increased since the pandemic, and more students are on waitlists. In an August 2020 survey of National Association of Independent Schools (NAIS) members, 58% of respondents reported that a larger than average number of families from non-private schools were making admissions inquiries. By late March, another NAIS survey reported that admission numbers had stayed steady or improved from the previous year at more than two-thirds of responding private schools, and 57% of responding NAIS-member schools said they had received more applications compared with the same time during the previous year.

The Steward School, Morrison School in Bristol, Fredericksburg Christian School (FCS) and St. Paul VI Catholic High School in Chantilly have waitlists for some — if not most — grades.

While St. Paul VI Head of School Ginny Colwell says her school’s waitlists are the result of intentional growth control rather than space constraints, other schools attribute their waitlists to their schools’ good reputations and families seeking alternatives to remote learning.

Steward School had a roughly 20% to 30% increase in student applications, and it has 650 students enrolled this fall, Frank says. Last year, distancing requirements meant that FCS had to turn down around 50 applicants, a loss of roughly $500,000 in tuition. This year, it had 991 students enrolled as of early October, up from 859 students last year, when social distancing measures were in place. Morrison School has 62 students enrolled, nine more than the previous year, but the school has provided about $9,000 more than the $120,000 budgeted for tuition assistance.

At the Catholic Diocese of Arlington’s schools, enrollment this school year increased more than 6% from the prior year, bringing total enrollment to almost 17,000 students.
St. Paul VI jumped from 964 to 1,090.

Private schools have largely borne the costs of distancing and safety measures, although some, like Morrison School, have received help from their communities. Morrison received air purifiers from Aerus, which has a manufacturing facility in Bristol, and masks from local companies Westfall Orthodontics and Universal Cos. In April, Gov. Ralph Northam invited state private schools to apply for $46.6 million
in federal funding to assist with pandemic-
related operating costs.

According to NAIS, 65% of responding members in October 2020 had purchased tents, trailers or added building space to allow for social distancing. Nearly all reported buying masks or face shields, 84% invested in plastic or Plexiglas dividers, and 64% said they had upgraded their heating, ventilation and air conditioning systems or purchased new systems.

Fredericksburg Christian School Superintendent Rick Yost says that, not counting extra janitorial costs, his school spent an average of $2,428 a month on sanitizing treatments and $2,722 on extra surface cleaning for high-touch areas like door knobs. He estimates that his school spent around $30,000 to $40,000 just installing Plexiglas dividers in the elementary school. St. Paul VI’s Colwell estimates her school spent roughly $30,000 on Plexiglas barriers between students who sit facing forward at instruction tables, two to a table. Gallons of hand sanitizer have been deployed, and the school uses air purifiers throughout its buildings.

“We’re not really surprised by the costs that we have,” Colwell says. “The CDC has been very good with what they feel [is needed] and what they recommend, so we have spent money [to comply with the CDC’s COVID recommendations]. … It’s the price of doing business, really.” St. Paul VI’s donors helped offset expenses, she says.

Also, a well-timed move from Fairfax city to Chantilly in summer 2020, in which St. Paul VI’s campus grew from 16 to 68 acres, provided for more outdoor space, including a large patio. It’s equipped with restaurant-quality outdoor heaters, and students can eat at picnic tables mask-free when the weather cooperates.

Morrison School pieced together federal funding and private donations to cover its expenses. It was also able to receive Paycheck Protection Program loans.

Although the school, which has small class sizes and is dedicated to children with different learning needs, wasn’t able to hold its annual golf tournament fundraiser last year due to the pandemic, most of its usual participants still donated, says Head of School Jami Verderosa, and the school will hold this year’s tournament in April.

“It’s because of the great staff and the supporters and donors that we have that we have been able to continue to grow,” she says.

Because of a partnership with a public school, Morrison received $26,283 in federal CARES Act funding money, which it used to hire additional personnel to clean daily. This year, two high school students volunteer after school on a rotating basis to assist the school’s custodian with cleaning. The school also added and replaced some Chromebooks in case the school had to go virtual again.

Because the school was built in 2015, the administration hasn’t upgraded its HVAC, but it did install Plexiglas dividers.

The biggest pandemic-related hits to the school’s revenue came from limited enrollment and increased tuition assistance needs, Verderosa says. Morrison was not able to hold a summer program in 2020. “That’s a lot of income that comes in …  and that’s a big recruitment [tool] for us for the fall, so that was a big setback because then we didn’t have families that could try our program [before] the school year,” she says. Also, the school did not offer a pre-K and kindergarten program in the ’20-’21 school year because additional classrooms were needed to physically distance students in other grades, although those programs returned this fall.

Labor shortages in private schools vary across the state. Despite struggling to find bus drivers, FCS was able to hire an admissions director and more teachers. The school raised its pay rate in order to attract extended care workers, and principals and teachers filled in during the interim.

School administrators say their schools have encountered some teacher turnover, but they attribute it to teachers leaving the industry due to increased stress and workloads, rather than an inability to compete for talent with public schools, which can offer higher pay but also have larger classes. “We asked a lot of our faculty last year,” Colwell says, “and they did not disappoint. I’m just impressed with the resilience and the positive outlook that many of our faculty [had] last year.”

Morrison School has been searching for a high school teacher with a math or special education certification since mid-August. For now, other staff members cover the class and duties.

St. Paul VI Catholic High School hired 18 teachers this year, some because teachers retired and some due to enrollment growth, as well as eight staff members, ranging from security and custodial employees to administrative assistants and teachers’ aides.

Despite the unexpected expenses brought by the pandemic, most private schools have seen high enough increases in enrollment numbers to offset the new needs, or in some cases, even see a net gain. “I spent 20 years in the business world before I came to do this, and our saying was, ‘Volume cures all ills,’” Yost says. “It’s true also in private education: Enrollment takes care of those things.”

After a year of learning how to operate in a pandemic, schools are glad to be fully in-person. Steward’s campus is full of “happy noise,” Frank says, with students and teachers chatting and engaging each other in-person.

“We are still offering full athletics, full fine arts,” he says. “We were able to bring back our lunch program this year. … We have not scaled back on faculty and staff. We have not cut any classes or other types of programming. We are robust as we were pre-pandemic.” 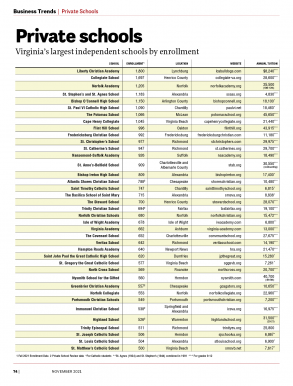 CLICK HERE FOR A DOWNLOADABLE PDF OF OUR PRIVATE SCHOOL CHART 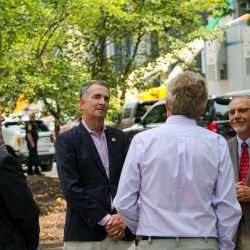