Savlan Capital has another deal underway in Fredericksburg

Hollywood, Florida-based investment group Savlan Capital announced Monday that it has purchased two medical offices in Henrico County for $18.96 million. The buildings are part of the Windsor Business Park in the western part of the county and were bought from Newport Beach, California-based REIT Modiv.

Savlan acquired a 51,800-square-foot flex building at 8575 Magellan Parkway, constructed in 2004 and currently leased to Williamson Drug Co., a wholly-owned subsidiary of Omnicare Inc., for $8.76 million. The facility is a pharmacy distribution, medicine storage, laboratory and prescription fulfillment center for other Omnicare locations across the region.

The second building Savlan acquired was at 8570 Magellan Parkway, a 72,890-square-foot office building constructed in 2001. It is being leased by Bon Secours Mercy Health and houses the company’s back-office IT and data center operations. Savlan acquired the building for $10.2 million.

Both buildings are in the 62-acre Windsor Business Park.

The purchases are part of Savlan Capital’s expansion of its medical office portfolio across the country. Savlan also purchased a medical office building in Dallas for $7.02 million from Modiv as part of the acquisition.

The Henrico deal is Savlan’s first purchase in Virginia, but the firm has another property under contract in Fredericksburg.

“We like the diversified economy of Virginia and plan on growing our holdings in the state,” Savlan CEO Zusha Tenenbaum said in an email. “We are actively looking at other medical and flex opportunities in Virginia.”

Tenenbaum said there are no major upgrades planned for the buildings.

Since May 2021, Savlan has purchased 20 medical offices.

Building was vacant at time of sale 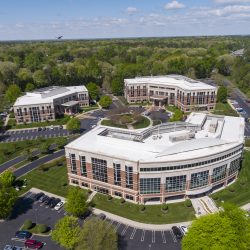