Research center is birthplace of missions to the moon and Mars

During the last hundred years, NASA’s Langley Research Center has been at the forefront of aviation and space exploration, from its World War I infancy through the sound barrier-breaking jet age to the Apollo moon missions. Heading into its second century, the center is blazing a trail that it hopes will lead within 20 or 30 years to humans landing on Mars and traversing deep space.

The facility traces its roots to a time when the United States was not an aviation leader despite the fact that the Wright Brothers had pioneered powered flight. By the dawn of World War I, “It was very clear that the United States was behind in aircraft construction and development,” explains Gail Langevin, history liaison with NASA Langley’s protocol and events team. France, Germany and Great Britain were quicker to see the military and industrial applications for aircraft.

Therefore, in 1915 the U.S. government established the National Advisory Committee for Aeronautics (NACA), which would eventually become the National Aeronautics and Space Administration (NASA). In 1917, NACA established its national headquarters building, Langley Research Center, in Hampton to conduct research to promote advances in civilian and military aviation.

These days NASA Langley Research Center generates more than $1 billion per year for the Hampton Roads economy and supports about 7,000 jobs. The facility will celebrate its 100th anniversary this year with a series of events, including: a NASA art exhibit at the Peninsula Fine Arts Center in Newport News from April 8 to June 25; a centennial symposium at the Hampton Roads Convention Center July 12-14; and an Oct. 21 open house at Langley Research Center featuring tours and exhibits.

Breakthrough innovations
In its early years, the Hampton facility and its pioneering wind-tunnel laboratories were visited by aviation legends like Howard Hughes and Amelia Earhart. NACA board members included Orville Wright and Charles Lindbergh. Langley researchers are responsible for numerous breakthrough innovations in aviation design and theory over the years, including development of the area rule, which reduced drag on aircraft flying at transonic and supersonic speeds.

“Langley has led the way in thinking about advanced lighter-weight materials, and a lot of these things are now used on almost every commercial aircraft you see,” says Charles E. Cockrell Jr., deputy director of the Space Technology and Exploration Directorate at Langley.

Russians launched Sputnik in 1957, it set off the space race and led directly to NACA becoming NASA in 1958. The space program was housed at Langley for its first four years.

When the Mercury Seven were selected in 1959, they were based at Langley and trained there until the Johnson Space Center in Houston opened in 1963. There are numerous photos in NASA’s archives of Alan Shepard, John Glenn and the other Mercury astronauts training in space-capsule simulators at Langley. 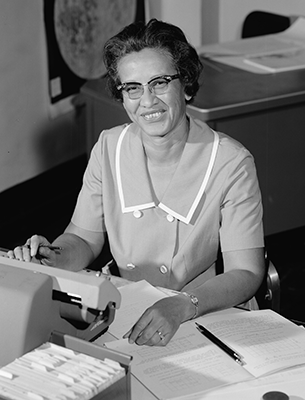 The Academy Award-nominated film “Hidden Figures,” starring Taraji P. Henson and Octavia Spencer, tells the story of African-American mathematician Katherine Johnson and her colleagues Dorothy Vaughan and Mary Jackson. While working in a racially segregated division at Langley, they made the critical calculations that allowed Glenn to make the first manned Earth orbit in the Friendship 7 capsule.

Apollo and Viking
The Apollo flight landing crew members trained at Langley’s Lunar Landing Research Facility in a mockup designed to simulate low-gravity conditions. “Neil Armstrong is reported as saying that it was very accurate, and the dust that had collected in the little fake craters actually kicked up similar to the way it did when he was landing on the moon,” Langevin says.

In the 1970s, Langley Research Center was in charge of the 1976 Viking Mars lander missions, which transmitted the first photos and chemical data taken from the surface of the Red Planet.

Now, in addition to its ongoing aeronautics work, which includes studying climate patterns and how to integrate drones into national airspace, Langley Research Center is once again focused on Mars.

“I’ve been with the agency 26-and-a-half years,” Cockrell says, “and I think we are as close to going to Mars as we ever have been in my career.”

Langley’s work on NASA’s Journey to Mars initiative includes splashdown modeling and safety tests of the Orion crew capsule that could take humans from near-Earth orbit to Mars and back as soon as the 2030s. NASA will work with private industry to get into near-Earth orbit. Researchers at Langley and other NASA facilities are developing technologies and procedures aimed at allowing humans to take the next step, traveling faster, longer and farther in space than ever before.

“We’ve been in Earth orbit a long time, and we know how to do that, and now we think we’re ready to move beyond that and talk about humans in deep space,” Cockrell says. “Right now it’s all about building up that capability for that Journey to Mars.”