Last year Colonial Williamsburg Foundation President and CEO Mitchell Reiss handed all of his senior staff members coffee mugs from Ringling Bros. and Barnum & Bailey Circus. The legendary Greatest Show on Earth went out of business in May after 146 years.

“I said, ‘Keep it on your desk as a reminder when we have to make tough decisions, because we’re entrusted with saving this foundation. And failure is possible, but it can’t happen on our watch,’” Reiss recalls.

As the Colonial Williamsburg Foundation celebrates its 90th anniversary this year, the nonprofit historic education and tourism organization is in the midst of a radical restructuring aimed at ensuring it doesn’t suffer the same fate as Ringling Bros.

Declines through the years in the number of paid visitors have left Colonial Williamsburg in a vulnerable financial state, forcing the foundation to draw large chunks of money from its endowment to offset operating expenses. As one of the state’s most iconic historic attractions, its fight for survival could be a bellwether for the future of other heritage sites.

“Colonial Williamsburg is one of our crown jewels in the commonwealth and is a destination where families have been creating cherished memories for generations,” says Rita McClenny, president and CEO of Virginia Tourism Corp. Besides shining a light on Virginia as the birthplace of America, the attraction is “the largest living-history museum in the country,” she adds.

With the foundation’s finances hitting perhaps the most dire point in its history last year, Reiss announced a series of dramatic cost-cutting measures. Colonial Williamsburg eliminated 71 jobs and outsourced another 262 positions to vendors who have taken over the attraction’s retail, golf, landscape services and facilities management. The Williamsburg Lodge is now a member of the Marriott Autograph Collection of hotels. The foundation also added two new executive-level members to the leadership team to oversee day-to-day operations, while eliminating vice president positions.

The changes, Reiss says, will allow the foundation to focus on its core mission of managing the Colonial Williamsburg Historic Area and its educational programs and museums.

The foundation saw about a $5 million improvement to its bottom line in 2017 because of the cost-cutting measures, Reiss says. Yet he acknowledges that the foundation still is running at a loss. In 2016 its expenses outweighed its revenues by more than $70 million. The 2017 deficit was expected to be around $65 million. Reiss anticipates greater cost savings this year and hopes to reduce annual operating expenses by $25 million in the next few years.

Lodging in particular “is recovering nicely” under the new management, Reiss says, noting that the Williamsburg Inn was recently designated a five-diamond Hotel by AAA, and its wedding business has picked up considerably.

“It was clear that we weren’t competent to run some of these businesses profitably,” says Reiss, a former college president and senior U.S. diplomat who was hired in late 2014 to run the foundation.

In 1983 the foundation formed the Colonial Williamsburg Co. to manage its hotel, restaurant, retail and golf operations with the intent of any profits generated going to support its historic preservation and educational missions. But that never happened.

More than 2,100 employees
Even after last year’s restructuring, Colonial Williamsburg remains one of the largest employers in Williamsburg. It has more than 2,100 employees, with about 1,650 of them full time. Started in 1928 with funding from philanthropist John D. Rockefeller Jr., Colonial Williamsburg is almost a small city unto itself. It functions as an open-air, living-history museum made up of restored and re-created buildings peopled with historic interpreters who teach guests about 18th-century Colonial America.

Colonial Williamsburg’s budget, workforce and property holdings far exceed those of internationally famous Virginia history destinations such as Mount Vernon and Monticello, the homes of founding fathers George Washington and Thomas Jefferson.  Colonial Williamsburg attracts about 570,000 visitors a year, compared with about 1.1 million paid visitors at Mount Vernon and 435,000 at Monticello.

Its 2016 annual budget was $227 million; however, the foundation needed to draw down more than $70 million — about 10 percent of the value of its $713 million endowment — to offset operating losses, according to Jeff Duncan, vice president of real estate and former acting CFO for Colonial Williamsburg. The foundation made a 12.1 percent draw from the endowment in 2014 and drew 11.2 percent in 2015, according to the nonprofit’s public tax records. By its own reckoning, Colonial Williamsburg determined that if it continues to draw funds at these rates, its endowment would be depleted within eight years.

In recent years the endowment, managed by Charlottesville-based Investure LLC, has reported annual investment earnings from dividends, interest and gains of around 2.5 percent. The endowment’s overall net assets have fluctuated considerably during the past decade, from $819 million in 2007 to $663.6 million last year, due to changes in the financial markets and the amount drawn down by the foundation. The endowment’s net assets were projected to increase by 11 percent in 2017, due to gains in investments and a stronger overall stock market, Reiss says. The year end increase was 14 percent. The endowment was expected to close 2017 with more than $700 million in assets.

Debt payments
Besides making up annual operating losses, Colonial Williamsburg also has more than $300 million in debt from loans it took out in the early 2000s for capital improvements at its Williamsburg Lodge and other projects.  According to Duncan, “The intent was that, by making these [capital] investments, they would pay for themselves over time. That didn’t occur.”

In addition to paying about $16 million in interest per year on the debt, Colonial Williamsburg has three payments due to repay the principal by 2024, starting with a $137.5 million payment in 2019, say Reiss and Duncan.

The foundation’s 28-member board of trustees, which includes heavy corporate hitters such as Dominion Energy CEO Tom Farrell, is studying possibilities for refinancing the debt and pushing the repayment date further into the future, Reiss says.  Virginia Business reached out to Farrell and board member Joe Montgomery, one of the country’s top-ranked financial advisers who lives in

Williamsburg, but neither responded to a request for comment.

Despite its struggles, the foundation has continued to receive good rankings from nonprofit evaluators GuideStar and Charity Navigator. They note that Colonial Williamsburg spent nearly 78 percent of its budget on programming expenses in 2015, as opposed to 15.6 percent on administrative costs and 6.6 percent on fundraising.

Access issues
In recent years, Colonial Williamsburg has reported donations of about $40 million in gifts and grants, according to tax filings.

Yet declines in paid attendance are a major challenge. Other nonprofit historic attractions such as Monticello, Mount Vernon and Historic Jamestowne all reported steady visitation increases during the past decade. At Colonial Williamsburg, paid visitation dropped 19 percent between 2005 and 2015.

Unlike Mount Vernon and Monticello, which are self-contained and require admission for entrance, Colonial Williamsburg’s sprawling historic area is spread along public streets. “We have 65 points of entry at least,” says Andrea Sardone,  the foundation’s executive director of marketing. “People can just walk onto the property … You can walk up and down the street for free. You can pretty much get the flavor of the place, but the good stuff is behind a ticketed door.”

A $40.99 one-day ticket at Colonial Williamsburg includes access to 18th-century trade shops with demonstrations by skilled blacksmiths and weavers, guided tours of the Governor’s Palace and Capital and admission to two art museums.

“We are combating a very, very strong social media word-of-mouth that tells people you don’t need a ticket” to stroll around Colonial Williamsburg, visit shops and restaurants, see historic interpreters and get a feel for the place, says Sardone. Popular travel sites such as TripAdvisor, she adds, include reviews that recommend avoiding the ticketed-only areas.

“We have a lot of people who ‘free ride,’ and it’s getting worse because of the internet,” says Reiss.

Citing security concerns as well as a desire to control paid admissions to the historic area, Reiss hopes to negotiate with Williamsburg city officials to eventually close some streets to traffic. He’d like to enclose the historic area within a fence and have a central entry gate where Colonial Williamsburg could collect admission fees. 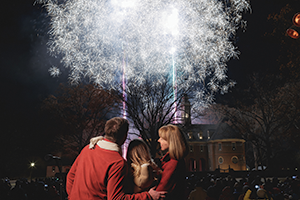 Colonial Williamsburg’s base ticket price is twice the price of admission to Monticello or Mount Vernon. In December, during its Grand Illumination event, the attraction planned to experiment with a la carte pricing, introducing an option to tour the Governor’s Palace for $15.

Also on the horizon is a new admissions tax. Passed by Williamsburg City Council, it’s scheduled to take effect July 1. The tax is one component of a plan to finance a tourism development fund (TDF) that city officials say would help seed new tourism projects while benefiting existing sites such as Colonial Williamsburg.

“Our community agrees that stagnant or declining visitation of our attractions is a priority for action by the city council,” says Scott Foster, Williamsburg vice mayor. “The TDF is a tool to help increase visitation by enabling the development of new and expanded tourism assets in our market. We are excited to see the public-private partnerships that emerge through the availability of this funding source and expect that major existing partners like Colonial Williamsburg will benefit.”

Yet, Reiss worries that Colonial Williamsburg will be forced to raise admission prices. He’s in discussions with the city government, hoping to prevent the tax from taking effect. “I think it would hurt everybody, not just us,” he says. “If fewer people come to Colonial Williamsburg, it’s bad for business. It’s bad for tourism in general.”

Building a brand
During the first half of 2017, Colonial Williamsburg saw a 10 percent bump in paid visitation compared with the same period in 2016, and it hopes to see higher numbers in 2018. The foundation collected $22.2 million in admission revenues in 2016, up from about $19.1 million the previous year.

Additionally during the last year, Colonial Williamsburg launched new features on its smartphone app. They allow visitors to purchase tickets, schedule carriage rides and determine the location of historic interpreters at any time. The foundation also has launched a 10-minute live orientation program every morning where an interpreter explains everything the historic area has to offer, as well as how to purchase tickets.

Another ongoing dilemma is brand identity. While Mount Vernon and Monticello are tied to Washington and Jefferson, Colonial Williamsburg doesn’t have that sort of public identification. “Most people would say butter-churning,” says Colonial Williamsburg spokesman Joseph Straw, “and we don’t even do that.”

Reiss and Sardone say the foundation also will explore how to appeal to millennials and compete with other entertainment options while staying true to its mission.

That’s a conundrum also being pondered by other historic sites. For instance, Mount Vernon is  overhauling a popular 4-D theater experience as well as introducing a new interactive exhibit called “Be Washington,” hosted by actor Chris Jackson. He portrayed Washington in the smash Broadway musical “Hamilton.”

“People have come to expect certain things presented in a certain media style, so we’re all about telling great 18th-century stories with 21st-century methods,” says Rob Shenk, Mount Vernon’s senior vice president for visitor engagement. These days that includes figuring out “how to tell the story [on Twitter] … in 280 characters or less.”

Despite their struggles to rise above the noise of smartphones and theme parks, however, heritage sites such as Monticello, Mount Vernon and Colonial Williamsburg, remain strong drivers for Virginia tourism, says Gary Sandling, Monticello’s vice president of visitor programs and visitor services.

Looking ahead, Reiss is confident that the foundation is moving in the right direction. “To be $5 million better in a restructuring year with a lot of one-time costs is a pretty significant accomplishment. We’re pretty confident that we’re going to do better than that the next year,” he says.

While cutting staff and slashing budgets is never easy, he adds, “This is a situation I inherited when I started in late 2014. These are not choices that any of us would like to have made but, given the circumstances, the alternative is worse.”