Five towns in Virginia have been named to Travel + Leisure’s America’s Best College Towns ranking. The magazine’s readers voted Charlottesville, Williamsburg, Harrisonburg, Fredericksburg and Lexington to the list highlighting 20 of the best college towns in the U.S. Burlington, Vt. was No. 1.

Charlottesville, home to the University of Virginia, was No. 2 on the list. The university was hailed for its diverse entertainment that includes Monticello, a “charming downtown pedestrian mall,” and music offerings ranging from the Moscow Ballet to up-and-coming bands.

Williamsburg, where the College of William & Mary is based, ranked behind Charlottesville at No. 4. “If your only experience with this town was a tour led by aspiring actors in period garb, it’s time for a repeat visit,” says Travel + Leisure’s write up on Williamsburg. The magazine touts Williamsburg’s arts district and romantic hotels, among other things.

Harrisonburg was No. 5 on the list, celebrated for its “revitalized downtown” featuring Three Brothers Brewing, Capital Ale House and bike paths. Fredericksburg ranked No. 9 with positive mentions for its dining scene and history. Lexington, home to Washington and Lee University and Virginia Military Institute, came in at No. 14. “Lexington is the kind of place you visit and find yourself picturing your life there,” Travel & Leisure says.

Brink’s CEO retiring amid board shakeup 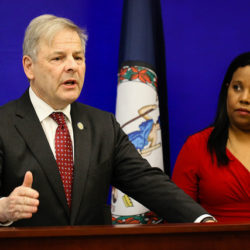