“We are excited to open the temporary casino in Bristol,” Hard Rock International Inc. Chief Operating Officer Jon Lucas said in a statement. “Hard Rock’s rich and storied music legacy is a perfect fit for Bristol, the ‘Birthplace of Country Music.’”

The casino’s temporary space in the former Belk store of the Bristol Mall has 30,000 square feet with 870 slots, 21 tables and a sportsbook. Hard Rock Bristol was the first casino to receive a Virginia Lottery Board license, issued on April 27.

The permanent casino will include a 3,200-seat performance venue and a 20,000-person capacity outdoor entertainment venue. The casino will be open 24/7, and the current space also features restaurants: Mr. Lucky’s, Brick’d and the Bristol Bar.

“We are so thankful to reach this significant project milestone, in opening the temporary casino,” McGlothlin and Stacy said in a joint statement. “‘Bristol Casino – Future Home of Hard Rock’ is something of which Bristolians can be very proud.  We are glad that the project is having an immediate impact in boosting Bristol’s economy, by bringing at least 600 new, good-paying jobs to the city.  This is only a start, as the project will generate even more jobs when the permanent casino opens.”

Three other casinos are preparing to open in Portsmouth, Norfolk and Danville.

In Norfolk, the Pamunkey Indian Tribe’s rival HeadWaters Resort & Casino is on schedule to open in 2024 next to Harbor Park, casino spokesperson Jay Smith said in April, adding he doesn’t have a timeline for its construction to start. Norfolk’s city government is pondering allowing the HeadWaters casino to open a temporary facility, which Smith said could help develop customers and allow the city to draw tax revenue sooner. The temporary venue received an OK from city planners in May, but still requires city council approval.

Caesars Entertainment’s Danville resort casino is set to be complete in late 2023. Caesars Virginia named Baltimore-based Whiting-Turner as the general contractor in April.

The Danville resort will have a 500-guestroom hotel, a casino with more than 1,400 slot machines and table games, a Caesars sportsbook and a World Series of Poker-branded poker room. It will also include 40,000 square feet of meeting and convention space and a 2,500-person entertainment venue, along with bars and restaurants.

In September 2021, Caesars upped the price tag on the Danville facility by $100 million to increase the hotel’s size from 300 t0 500 rooms. The project expects to create 900 temporary construction jobs and 1,300 operational jobs. 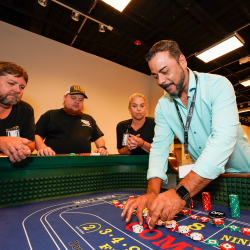 Training’s in the cards for Hard Rock Bristol