Lynchburg is cool, and people are starting to notice.

The Hill City still has its big, well-established players, such as Liberty University and BWX Technologies. Liberty, with its 7,000-acre campus and its online programs, has more than 2,500 faculty teaching more than 111,000 students. Its operations are estimated to generate more than $1 billion in economic activity each year. Nuclear power company BWX Technologies has a $2.1 billion contract to supply nuclear reactor components for the U.S. Navy’s submarines and aircraft carriers.

“BWX is killing it,” says Marjette Upshur, the city’s director of economic development and tourism. “They fly under the radar because they are a defense contractor, but I definitely think they are looking at expanding ways they can help their customers.”

Upshur counts Liberty and BWX among the city’s anchors, businesses and organizations “not at the whim of the market, where they’re not going to pick up and move in the middle of the night. They’re committed to the community.”

But while those anchors are critical to the region’s economic health, what’s really marking Lynchburg today is the transformation of downtown and the accolades it’s receiving.

A Lynchburg restaurant is Virginia’s 2019 restaurant of the year. The readers of Condé Nast Traveler named a Lynchburg hotel No. 6 on a list of top hotels in the mid-Atlantic region. Virginia’s largest craft brewer announced it’s opening a taproom and brewery downtown. All that happened in one eight-day stretch of October. A week later, a young tech company led by Microsoft veterans announced plans to move its headquarters into a historic downtown building.

“I think we surprise people sometimes both by being a rapidly revitalizing urban center but young and growing,” says Anna Bentson, Lynchburg’s assistant director of economic development and tourism, “which is just not what most people think of when they hear Lynchburg.”

Some people apparently do. Reviews.org, which concentrates on reviewing tech products and services, put Lynchburg at the top of its list of Best Places for Millennials to Move in 2019. Forbes named Lynchburg among its most recent Top 100 Best Small Places for Business and Careers. Last fall, when Microsoft News named one city or town in each state that’s “set to boom,” Lynchburg was Virginia’s city on the list.

Dave Henderson says “downtown Lynchburg was starting to show signs of true promise” when he opened The Water Dog bar and grill with his brother Chris in 2016. Henderson had spent most of his working life with Wachovia Bank (now Wells Fargo) before he decided to come home to Lynchburg and start a business.

“I had a really good role, a really good job and was successful there,” he says. “But success isn’t measured just in promotions and salary, obviously. It has to do with some other things.”

Henderson was looking for “that beautiful space in between work and play where you sort of don’t know the difference.”

Three years after opening, The Water Dog received the Virginia Restaurant, Lodging & Travel Association’s Restaurant of the Year Award. Across the street from The Water Dog, the Hendersons have created The Glass House, a music venue with a full bar and kitchen. That’s where Starr Hill Brewery, based in Crozet, decided to celebrate its announcement of Starr Hill on Main. It’s a move the company has been considering for a couple of years, according to Josh Cromwell, Starr Hill’s finance manager.

“We’re excited about Lynchburg for a lot of reasons,” Cromwell says. “It’s a town that doesn’t get a lot of press about being an up-and-coming developing area in Virginia. … It’s got a young, really vibrant population base.”

Cromwell says he’s excited about the city’s plans for downtown and about the people and organizations implementing those plans.

“It’s a really young and energetic group,” he says, “and they’re really passionate about taking Lynchburg a little further from where it currently is.”

The city already has spent more than $50 million in public spaces and infrastructure downtown, and the process continues. Downtown has more than 1,000 loft apartments and a series of walkways, stairs and terraces called the Bluff Walk. The renovated 700-seat Academy of Music Theater, built in 1905, rebuilt in 1912 after a fire and closed since 1958, reopened in December 2018. The Virginian Lynchburg, one of Hilton’s Curio Collection of hotels, opened in 2017 in a renovated building constructed in 1913. The Craddock Terry Hotel, housed in a former shoe factory constructed in 1905, opened in 2007. That’s the hotel Condé Nast readers praised.

“In every corner, there is a nod to the Craddock Terry shoe factory,” says hotel director Becky Jo Aleman. “I think it’s those little touches that really make it a special experience for our guests.”

Tools and equipment from the factory are part of the hotel’s décor. Shoes made there also are on display. The door to each of the 44 rooms is decorated with a wooden cutout of some kind of footwear — from hiking boots to swim fins — and guests order continental breakfasts by placing a shoe box outside their rooms at night. In the morning, the shoe boxes are returned, loaded with muffins, fruit, yogurt and orange juice.

One of the hotel’s most popular features for some guests isn’t connected to the building’s history. It’s a wire-haired terrier named Penny Loafer. The first question from many guests, Aleman says, is “Where’s Penny Loafer?” The terrier is a sign the hotel is pet friendly, and Aleman says many guests take advantage of that. “Penny doesn’t care how big they are,” Aleman says of guests’ pets, “she loves company.”

The same year the Craddock Terry Hotel opened, city offices moved from the Carter Glass Building, leaving another historic Lynchburg building empty. It was built by the publisher of The News and The Daily Advance newspapers, Carter Glass, who would become a U.S. senator and treasury secretary under President Woodrow Wilson. (He is best remembered for the Glass-Steagal Act, the 1933 law that separated

CloudFit Software, founded just under two years ago, is moving into the building and plans to add 139 jobs during the next three years. CloudFit, which works with Fortune 500 companies and the Department of Defense, helps its customers leverage cloud technology to “empower every business on the planet to successfully transform at maximum velocity,” according to the company. Four of the company’s five highest ranking executives spent more than a decade at Microsoft.

Carroll Moon, CloudFit’s co-founder and chief technology officer, grew up in the area. “Having grown up here, I am an enormous fan of the people of our region — brain power, work ethic, service to customers and teammates. I call it blue collar brilliance.”

While all that is happening downtown, Liberty University is beginning what it says will be a $20 million makeover at River Ridge Mall. Opened in 1980, River Ridge, like so many shopping malls, has lost anchor stores as major retailers downsized. Now the former Sears store has been torn down, reportedly to make way for a big box sporting goods store. The former Macy’s is set to become something like a park, with concerts, a farmers market and movies.

“It’s fantastic,” Upshur says of the mall plans. “Downtowns have their own personality and character and all that type of thing. A mall can, too. It’s exactly what the market is clamoring for or chooses to support.”

Lynchburg is the urban hub of four rural counties: Amherst, Appomattox, Bedford and Campbell. And with more than 260,000 people in the Lynchburg MSA, Upshur says, there are lots of customers to go around.

“I see bustling streets,” Henderson says. “I see people smiling and remarking on how beautiful the city is and how much energy there is, and I’m just glad to be a part of it.” 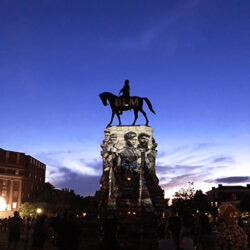