Layoffs in Christiansburg  would follow bank merger
Ninety workers at a StellarOne Bank operations center in Christiansburg would be displaced by a merger with Richmond-based Union First Market Bank, according to The Roanoke Times.

With the merger, responsibilities now handled in Christiansburg would be consolidated at Union First Market’s existing operations center in Ruther Glen in Caroline County. The Ruther Glen facility would expand its workforce by about 50 positions. Displaced Christiansburg employees would be given priority in filling those positions, a Union First Market spokesman said.

About 60 operations employees will remain in Christiansburg after the consolidation, which is expected to be completed by next May.

The StellarOne-Union First Market merger, expected to create the largest Virginia-based community bank in the commonwealth, was explored in the August issue. 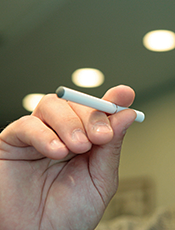 The school’s research will be used to develop policies for U.S. regulators. Until now, little research has been conducted into the health effects of e-cigarettes.  Battery-powered e-cigarettes don’t burn tobacco. Instead, they vaporize a liquid that contains nicotine.

VCU is one of 14 schools participating in the tobacco research project. They will provide their results to the U.S. Food and Drug Administration (FDA) and the National Institutes of Health.

The FDA has the authority to regulate tobacco products but so far has not proposed regulations for e-cigarettes.

American tobacco companies, including Richmond-based Philip Morris USA, are showing increasing interest in e-cigarettes as the sales of traditional cigarettes continue a slow decline.  NuMark , a sister company to Philip Morris USA, is testing MarkTen, an electronic cigarette, in Indiana.

The editor’s column in the October issue looked at the development of e-cigarettes at Philip Morris USA.