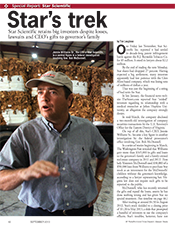 The dietary supplements company, renamed Creek Pharmaceuticals Inc., now is based in Sarasota, Fla., where it has consolidated operations previously located in Virginia, Massachusetts and Washington.

The company’s founder and former CEO, Jonnie Williams Sr., is a central figure in a federal investigation that resulted in corruption charges against former Gov. Bob McDonnell and his wife. They have pleaded not guilty and are scheduled to go on trial July 28.

Williams provided more than $165,000 in gifts and loans to the McDonnells during the governor’s tenure, which ended in January.

The magazine has reported on Star Scientific and the gift scandal in many articles and columns since mid-2013. 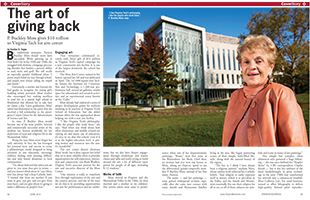 Moss museum closes
A museum owned by artist P. Buckley Moss in Waynesboro has closed. Instead, Moss is focusing on two small galleries, one which already has opened in Blacksburg and a second scheduled to begin operation in Waynesboro. Virginia Business profiled Moss in its June edition in connection with her $10 million donation for a news arts center at Virginia Tech.

Stadium deal pulled
Richmond Mayor Dwight Jones has withdrawn a development proposal including a new minor league baseball stadium. The proposal, which faced certain defeat by Richmond City Council, was designed to spark development in the city’s Shockoe Bottom and Boulevard areas. The magazine discussed the plan’s possible ripple effects on commercial real estate in the May issue.