Federal Reserve Bank of Richmond President and CEO Thomas Barkin said Thursday that he hopes to bring interest rates up to pre-pandemic levels “relatively quickly,” while noting that it’s hard to predict the future effect of the geopolitical conflict between Russia and Ukraine on the nation’s economy.

Speaking at a luncheon in Colonial Heights hosted by the Virginia’s Gateway Region economic development organization, Barkin said the last time Russia invaded Ukraine in 2014 — when it took over two regions, unlike this week’s action to control the entire nation — it did not have a significant impact on the U.S. economy. The economic impact could also be low this time around, he added, but it depends on how many other nations get involved and how Russia responds.

“The Russian economy and Ukrainian economy are relatively segmented,” Barkin said. “From the U.S., we have some exposure — oil prices, wheat, nickel, those kinds of things and commodities. But you and I can both speculate on other ways this thing could escalate. And it’s particularly around the ‘tit for tat.’ We might be more aggressive on sanctions, [and] they might be more aggressive, whether that be energy markets or cyber. … Those are things that could affect growth in the economy.”

Barkin called the invasion news “unsettling,” creating more uncertainty after two years of pandemic-related economic fluctuation. It’s possible that cyberattacks, such as the one that impacted the Colonial Pipeline last year and caused gasoline shortages in Virginia and other East Coast states, could develop, or that oil prices rising across Europe could lead to “significant price spikes” and supply chain stress, he added.

The Fed board is set to meet in March, with many watchers expecting an interest rate boost, after nearly two years with rates at close to zero. Barkin said most of the board members want to raise rates to a “highly normalized” level, although he did not speak in specific terms about what could happen at next month’s meeting. The New York Times reported Thursday that several officials on the board have signaled in recent days that the invasion will not affect plans to raise rates.

Barkin said that the national unemployment rate, at 4% in January, was relatively low and that the economy’s recovery since May 2020 was “the fastest recovery in our memory. The economy is already bigger than it was pre-pandemic, and by the end of this quarter, most forecasts say it’ll be higher than even the pre-pandemic trend. Underlying demand looks very robust. Personal balance sheets are very healthy. Business balance sheets are very healthy.”

He also predicted that inflation — which rose to 5.8% last year, according to the Fed — would be “somewhere in the threes” range by the end of 2022. Barkin also said that prices of goods, which rose significantly during the first part of the COVID-19 pandemic, would lower “massively” in coming months, although prices of services would rise.

But with unpredictable COVID variants and families still struggling with child care, Barkin said he expects the tight labor market “lasting a while.”

Answering an audience question, Barkin said that although he doesn’t see the need for Congress to immediately reduce the national debt, which is now at $30 trillion, he believes legislators will need to take action to reduce the debt-to-GDP ratio “that gives us the flexibility to be able to do the kinds of things we did during the pandemic,” such as stimulus packages and federal unemployment payments.

Why the Richmond Fed has zero Black Ph.D. economists 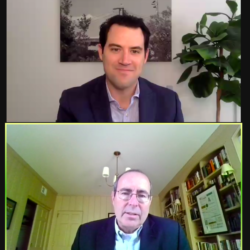 What stays and what goes