The economy has grown “moderately” in recent weeks, with strong production increases, employment rising and consumer spending up in the Federal Reserve’s Fifth District, which includes Virginia, North Carolina, South Carolina, West Virginia and Maryland, according to the latest edition of the Fed’s Beige Book, released Wednesday.

In an industry hit hard by the pandemic, tourism and travel are growing modestly, according to the report, with outdoor attractions and beach destinations popular. Restaurants said they hope warmer weather will bring more outdoor diners.

Retailers are seeing traffic increase, but that hasn’t necessarily translated into sales for clothing stores. Food and home goods are in high demand.

In real estate, demand for homes and a decrease in inventory have houses selling fast — some “within hours,” according to the report. But commercial real estate leasing remained below pre-pandemic levels. Demand for industrial real estate was strong, the report noted.

The new round of Paycheck Protection Program loans has led to modest growth in business lending, according to the report, and new stimulus payments created strong deposit growth for banks. Loan activity has grown moderately.

Employment is increasing modestly, according to the report, but recruitment and turnover is a challenge, depending on the industry.

“One manufacturer said that they needed to hire and train three workers to retain one,” according to the report, while a professional business firm reported that engineers and technical professionals are difficult to find because “those workers [are] hesitant to change jobs.” A staffing agency said some firms were raising rates to increase interest in open hourly and lower-wage positions. 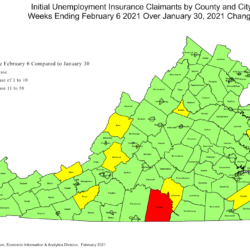