It’s been 40 years since the small cities of Suffolk and Nansemond joined to form Virginia’s largest municipality in land area, a milestone city leaders say puts Suffolk not on the cusp of middle age but in the center of adolescence.

“Suffolk is in its teenage years,” says Mayor Linda Johnson. “I see us maturing daily, becoming a vibrant community and knowing who we are and where we’re going in the future.”

Unlike many of its Hampton Roads neighbors, Virginia’s fastest-growing city has room to expand. As more businesses and housing developments move into the once sleepy farming community, however, city leaders want to make sure that growth is managed responsibly, especially in regard to public safety, education and quality of life. “We’re planning for the future and how we want the city to look 25 years from now with a balance in the tax base between residential and commercial,” Johnson says.

One hundred years after Italian immigrant Amedeo Obici opened a peanut processing plant in Suffolk, peanut farming and Obici’s Planters Peanut Co. are still major industries, but the city’s agrarian economy and way of life have evolved into a high-tech market. Last year, 66 expanded and new businesses announced plans to create more than 1,950 jobs and invest upward of $94 million in Suffolk, with modeling and simulation and cyberdefense emerging as prime economic drivers.

That’s welcome news coming just three years after the U.S. Department of Defense announced plans to shutter the U.S. Joint Forces Command in Suffolk.  While the city lost 1,200 to 1,500 positions with the closure, it ultimately gained more than 1,500 jobs last fall when the U.S. Navy moved four commands related to cyberdefense into the Joint Forces space.

Along with the budding high-tech environment, an array of middle-income and upscale housing developments, shopping centers and office and industrial parks have sprung up where corn, soybeans and peanuts once grew.  During the past decade, the city’s population rose 34.6 percent, an increase nearly three times as much as any other Hampton Roads city. It now hovers around 85,700. 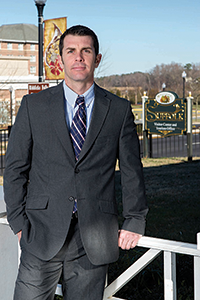 In addition, the number of jobs in the city jumped 43 percent from 2000 to 2011, the ninth highest growth in the nation, a feat factoring into CNN Money Magazine’s ranking Suffolk among its Best Places to live in 2012. The city’s median household income is now the second highest in Hampton Roads. “More people are moving out here and spending money,” says Kevin Hughes, the city’s economic development director. “People want to be here because they can grow and prosper.”

City slogan on the mark
The city’s slogan — “It’s a good time to be in Suffolk” — appears to be on the mark as Suffolk celebrates the 40th anniversary of the merger between Suffolk and Nansemond.  So good, in fact, that late last year, Kroger purchased an 11.6-acre site in northern Suffolk to build its third Kroger Marketplace in Hampton Roads, a 113,000-square-foot hybrid grocery store. Kroger’s $21.7 million investment will bring up to 350 new jobs to Suffolk when the store opens this fall.

That development dovetails with major expansions of current Suffolk businesses. Last year Unilever announced that it would invest $96.2 million to expand and upgrade its nearly 60-year-old Lipton Tea manufacturing plant near downtown. The largest tea-processing facility in the U.S., the plant makes almost all of the Lipton tea bags sold in North America.

Meanwhile, California Cartage Co. has leased the first of three buildings in the Virginia Commerce Center, a 100-acre site that eventually will provide 1.3 million square feet of industrial space. The Long Beach, Calif.-based distribution and shipping firm employs more than 200 people at its 385,320-square-foot facility.

With firms expanding and new businesses and residents moving into Suffolk, city leaders are on the lookout to prevent growing pains. While enthusiastic about the growing business sectors, they are equally proud of Suffolk’s agricultural legacy, recognizing that the farms provide jobs and consumer goods.
“Agriculture remains a strong industry, but we’re not actively promoting it,” Hughes says, pointing to Suffolk’s 20-year effort to diversify. “As we get sharper and make more good investment decisions, we’re promoting Suffolk as a good location for a lot of industries. We spend a lot of time making sure we make the right decisions.”

Burgeoning developments along Route 17 in northern Suffolk have helped shape Suffolk’s “teen” years. Harbour View, the 2,000-acre planned community launched in the late 1980s, features upscale homes, a medical office park and shopping centers. The latest is Riverfront Shoppes, a high-end retail, office and medical development that will cover 3.9 acres and is slated to open later this year.

“There’s a void in Harbour View on the retail side in terms of a high-quality, neighborhood shopping center with a neighborhood feel,” says J.C. Wynkoop, a broker with S.L. Nusbaum’s retail brokerage and development, who is handling the project’s leasing for The Gee’s Group, a Virginia Beach developer.
Wynkoop envisions the retail component featuring a fine dining restaurant, as well as high-end family eateries and fashionable shops. “It’s a nice strong territory with a mix of professional and high-end users. We’re designing it to recruit high-end tenants. There’s not going to be pawn shops or car title businesses here.” 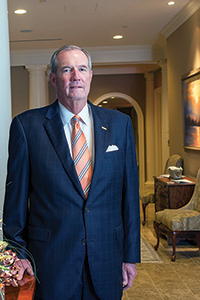 TowneBank already has a stake in Harbour View. The Hampton Roads financial institution built a member service center on a 22-acre site there in 2003 and expanded it in 2012 with a 45,000-square-foot operations center and a 16,000-square-foot education facility. “It’s been a very attractive and convenient place,” says Ward Robinett, president of Hampton Roads-based TowneBank. “There is that westward and northwestward migration from the cities of Portsmouth and Chesapeake.”

The opening of the Monitor Merrimac Bridge Tunnel and Interstate 664 two decades ago improved access to Suffolk from other South Hampton Roads cities, as well as the Peninsula. “That spurred a significant amount of growth that continues today,” Robinett notes. “Connectivity probably is the biggest thing there, and Suffolk has a very bright future, primarily because of its geographic location.”

Cyberforces command move
That prime location was one reason the Navy opted to move its cyberforces commands from Joint Expeditionary Base Little Creek-Fort Story to the former Joint Forces command campus on the outskirts of Harbour View. A $54 million investment, the move places the technology-related commands just down the street from the Virginia Modeling, Analysis and Simulation Center. As one of the world’s foremost research centers for computer modeling, simulation and visualization, VMASC initially focused on military defense and homeland security but has diversified into transportation, social sciences, education and health care.

“The modeling and simulation industry remains an important technology with immense opportunities through its endless applications, and VMASC needs to be at the forefront as Virginia’s research leader in this field,” Johnson says.

The modeling and simulation center is housed in a high-tech center in Hampton Roads Crossing, a mixed-use office, retail and residential development where the Kroger Suffolk Marketplace is under construction. Encompassing 130 acres in Suffolk and an adjacent 18 acres in Portsmouth, Hampton Roads Crossing is The Terry Peterson Cos.’ largest investment in Suffolk. “It’s one of the largest undeveloped pieces of property within a relatively short radius to everything,” says John Peterson III, the Virginia Beach developer’s senior vice president. “This is the growth corridor not only in Suffolk but largely in Hampton Roads.”

The Terry Peterson Cos. has built several residential projects in Suffolk, including one near downtown and three in the northern section and is considering several other projects in the city. The company’s condominium development, Kings Fork Farm, offers more than 300 homes from the low $200,000s to the low $300,000s. While sales slowed significantly during the economic downturn, Peterson says things picked up in the first half of 2012, and it is now one of the two or three best-selling in Suffolk. “We’re going to continue to be in Suffolk for a long time,” he adds.

Retaining a small-town feel
Other developers also are making their mark on Suffolk. In 2012, the Monument Cos. contributed to the downtown revitalization by transforming a city block of historic buildings into apartment and commercial spaces. “Suffolk is unique because we offer so much,” Johnson says. “All residential options are available — rural, urban, suburban.”

Also under construction downtown: a new municipal building and 911 call center expected to promote further revitalization and growth. The facility is expected to be completed this year.

Despite the flood of newcomers to both the business and housing markets, Suffolk retains its small-town feel, thanks to close-knit communities like Whaleyville in the south, Driver in the north and Holland in the west. “It’s part of the beauty and charm of Suffolk, and  I don’t think we’ll ever lose that,” Johnson says. “It’s within our citizens and the joy they have in living here.”

Community spirit inspires Suffolk residents to look out for one another, she adds. In 2012, a Chronicle of Philanthropy study found that Suffolk residents donate more of their disposable income to charity than the state or nation as a whole.  “We believe very much in neighbor helping neighbor,” Johnson says.

Suffolkians are also coming together to help the youngest residents. After state health officials found that 11.8 percent of babies born in Suffolk weighed 5 pounds, 8 ounces, or less, the Western Tidewater Health District and Sentara Obici Hospital teamed up to promote healthy, full-term pregnancies. “Here We Grow Suffolk” offers parents support during pregnancy and in the first few months of the newborn’s life. Since November 2011, more than 2,800 families have been screened, and birth weights are gradually rising. “We’re teaching people to become more self-sufficient and get better prenatal care,” Johnson notes. “We’re working hard, but the problem is prevalent in a lot of areas.”

Overall, the city continues to improve in the annual County Health Rankings by the University of Wisconsin Population Health Institute and the Robert Wood Johnson Foundation. In the most recent survey, Suffolk ranked 66th out of 133 Virginia localities, moving up six positions from 2010. Especially striking was the improvement in the city’s mortality rate, as well as declines in sexually transmitted infections and the teen birth rate.

City leaders expect Suffolk to continue making strides, seeing a wealth of potential in their 40-year-old city that is just now beginning to be realized. “Suffolk is a very vibrant city with a tremendous ability for people to come here to live, work, play,” Johnson says. “It’s a place on the map that people want to remain for a long time.”