Home Other Global Extending the rainbow 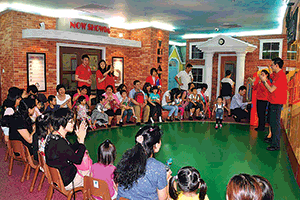 Gail W. Johnson began Rainbow Station’s foray into China with a simple handshake agreement. The preschool franchise, which currently has 10 campuses in the U.S., opened the first of what is anticipated to be 110 schools in China in January.

The expansion abroad promises to bring new growth to the Henrico County-based private preschool, which became popular early on with working parents for its innovative approaches to private daycare, including backup care for ill children.

A China representative first contacted Rainbow Station in 2011 about taking its concept abroad. “We weren’t interested because we were focused on restarting our growth in the United States,” says Johnson, Rainbow Station’s CEO and founder. “We decided to talk to them in March 2012.”

Paul Pan, Rainbow Station’s partner in China, began looking into early education programs about two years ago. “At the time, the first wave of early education was near its end in China, and the second wave was beginning to take off,” he says. “After completing extensive research on Rainbow Station and meeting with Gail and Earl Johnson [her husband, the vice president of Rainbow Station], I realized I had the perfect opportunity to bring their unique brand and curriculum to China.”

Gail Johnson  a former pediatric nurse, launched the company in 1989 after realizing that women who were entering the workforce needed suitable care for their children, even children who were mildly ill. “It grew beyond our imagination,” Johnson says, referring to the school’s enrollment. “We decided to franchise and have a franchise prototype.”

She created a “campus with a theme” that includes the Get Well Place and The Village, a school-age program that teaches children decision-making skills and promotes freedom of choice. “It’s worked beautifully,” Johnson says. “Children can choose what activity they want to do.”
In 2010, Rainbow Station became the first preschool system in the country to teach author Steve Covey’s “The Leader in Me” module. “We rolled that out to our franchisees in 2012,” Johnson says. It was that leadership concept that attracted Pan to the company. “It is extremely important to me to offer a better early education alternative for children in China and to bring the interactive way of teaching and methodology that Rainbow Station provides to children here,” he says.

The early education market in China is developing rapidly, spurring competition among preschool brands. What parents are looking for “is not whether to take the kids to a program but rather which program would be better for their children,” Pan says, noting that most of the preschool curriculum in China is single-focused. “There is a lack of full-scope early education programs in the market and that is where Rainbow Station fits in.”

Rainbow Station offers Chinese families a comprehensive American program “that is developmentally appropriate for early childhood and taught through play and activities,” Pan says. “We’re poised to set the new standard of early education in China.”

Shenzhen was chosen as the school’s first international location in part because of its growing middle class. Pan would like to have five schools by the end of  next year, including three corporate locations. “Ideally, I would like to open 200 units over the next five years,” he says.
In the U.S., Rainbow Station is building additional schools in Richmond and Charlotte, N.C. The company opened its first franchise 10 years ago. “During the recession we were totally stalled out,” Johnson says. “We were going to build two more schools in 2009, but it didn’t happen.”

Now that the economy is beginning to bounce back, Johnson is able to find financing. “There is growth everywhere. It feels good after a long walk in the economic desert,” she says.
Rainbow Station currently has two corporate schools, one in Henrico County and another in Hanover County. The rest are franchises.

The company hopes to open more international locations. “As we go into different markets, we have to adjust our model to the market,” says Rick Sample, president of Rainbow Station International, who just traveled to Indonesia to meet with a possible partner. “Our goal is to enter another market in the next year or two. We would like to be in three markets within five years.”

The company has received inquiries from several other countries, including Canada, Turkey, Singapore, Qatar and Abu Dhabi in the United Arab Emirates. “We are also looking at markets in Latin America,” Sample says.

He stresses the importance of learning all that you can about a foreign market. “You have to be sensitive to cultural differences,” he says.

For example, in Asia you must use two hands when you receive a business card. “They treat business cards as an extension of the person,” Sample says. “You want to look at it, read it and then ask a question. Then put it in front of you on the table. You never put it in a case or write on it. That is considered an insult. These are things you are supposed to know before you go.”

Economy in Shenzhen
A fast-growing city, Shenzhen is ranked fourth in economic power on the Chinese mainland. Industries include manufacturing, high-tech development, shipping and financial services. The city has several high-tech employers, such as computer company Hasee, global information and communications technology solutions provider Huawei and BYD, which specializes in information technology, automotive and energy solutions. Hon Hai Precision Industry Co., one of the larger manufacturers in the city, makes the iPad, iPhone and the Kindle. Other large companies include residential real estate developer Vanke.

What to see
Rick Sample was amazed at the beauty in Shenzhen the first time he visited the modern metropolis. “There were palm tree-lined streets and azaleas blooming,” he says. “There’s lots of energy in the city.” Many visitors head to the China Folk Culture Village in Shenzhen, where they can learn about more than 50 nationalities. Other popular attractions include the seaside resorts of Dameisha and Xiaomeisha, the Shenzhen Safari park with animals ranging from swans to panda bears, Shenzhen Window of The World with nine areas dedicated to the wonders of the world, and the modern theme park Shenzen Happy Valley.

Economy in Henrico County
Henrico County is home to four Fortune 1,000 companies – Altria, Genworth, Brink’s and Markel – as well as Richmond International Airport. Major industries include health care, retail and government. The county has more than 60 foreign-based companies. Many of them are based in Germany, the United Kingdom, the Netherlands, Japan and Canada.

What to see
Founded as the Citie of Henricus in 1611, Henrico County has more than 30 county parks and recreation centers that include Three Lakes Park, Nature Center and Aquarium. Other recreational amenities include seven golf courses and two boat landings. Twice a year the county hosts NASCAR racing weekends at Richmond International Raceway. Other county destinations include Lewis Ginter Botanical Garden and the Cultural Arts Center of Glen Allen.