Conspired with ex-NFL player to defraud Metro operator of $310K

A former assistant superintendent of Washington Metropolitan Area Transit Authority (WMATA) was sentenced Tuesday to 14 days of incarceration and two years of supervised release after conspiring with a former pro football player to defraud the transit authority of more than $300,000.

In January, Kirby Smith pleaded guilty to violating federal law by supplementing his salary as a government official, and Tuesday he received his sentence in the U.S. District Court for the Eastern District of Virginia, according to a news release from the WMATA Office of Inspector General. Smith conspired with Brian Carpenter, a 1980s cornerback for the New York Giants, the Buffalo Bills and the former Washington Redskins.

Carpenter pleaded guilty in July to orchestrating a conspiracy to defraud WMATA through sales of janitorial products from his Leesburg-based company Flintstone Group that were never delivered. According to the news release, Smith permitted Carpenter to charge his WMATA-issued credit card for supplies that weren’t delivered. Carpenter kept most of the amount charged from the sales, and Smith received cash payments in return.

To avoid detection by the transit authority, which oversees the Metrobus and Metrorail lines in the Washington, D.C., region, Carpenter used at least 10 different companies to process transactions from Smith’s credit card, most of which were not in the janitorial supply business. Carpenter also provided Smith with fake and fraudulent invoices representing that WMATA had received the products it ordered, including enzyme solvents and degreaser citrus solvents.

WMATA spent $310,000 on products it didn’t receive, according to the statement. Carpenter is set to be sentenced Dec. 15 and faces a maximum of 20 years in federal prison.

Along with the jail time and probationary period, Smith must pay $174,054 in restitution to WMATA. He pleaded guilty to the 2013-14 scheme in January. According to a WTOP report, Smith worked for Metro from 1989 to 2015, rising to become an assistant superintendent for maintenance and custodial services in 2013, a job that came with a WMATA-issued credit card and funds for cleaning supplies for the Red Line stations. 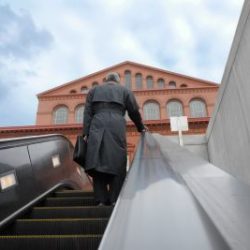 130 escalators to be replaced at 32 stations