The 2021 governor's race is on, with power hanging in the balance

With early voting starting the next day, Virginia gubernatorial candidates Terry McAuliffe and Glenn Youngkin came out swinging in their Sept. 16 first debate, sniping over issues ranging from coronavirus vaccine mandates to abortion in what The Washington Post described as a “bare-knuckled” sparring match at the Appalachian School of Law.

Virginia voters have until Nov. 2 to decide between McAuliffe, a champion fundraiser seeking a second (nonconsecutive) term, and Youngkin, a political outsider and retired equity fund CEO with a hefty personal bankroll and a blank public record. Both men say they’ll be the best governor for business and both are willing to shell out record sums to land the job.

Read our exclusive interviews with McAuliffe and Youngkin.

That race, along with all 100 House of Delegates seats also on the ballot, will determine whether Democrats retain the power over state government they gained in 2020, when the party assumed majority control of the legislature for the first time since the 1990s.

An early September poll by The Washington Post and George Mason University’s Schar School of Policy and Government showed the gubernatorial race in a virtual dead heat, with McAuliffe leading Youngkin by three percentage points, within the margin of error. Political analysis site FiveThirtyEight also noted in mid-September that the contest was shaping up to be much tighter than anticipated. McAuliffe’s previously assured lead stands to be harmed by President Joe Biden’s flagging approval ratings, the site noted, as well as Youngkin’s willingness to pour millions of his own money into the race. Additionally, an internal Youngkin campaign poll found that third-party, progressive Liberation Party candidate Princess Blanding could pull enough support away from McAuliffe to cement a Youngkin victory.

Virginia is the only U.S. state that doesn’t allow governors to serve consecutive terms, and McAuliffe, if elected, would be the state’s first two-term governor since Mills Godwin in the 1970s. 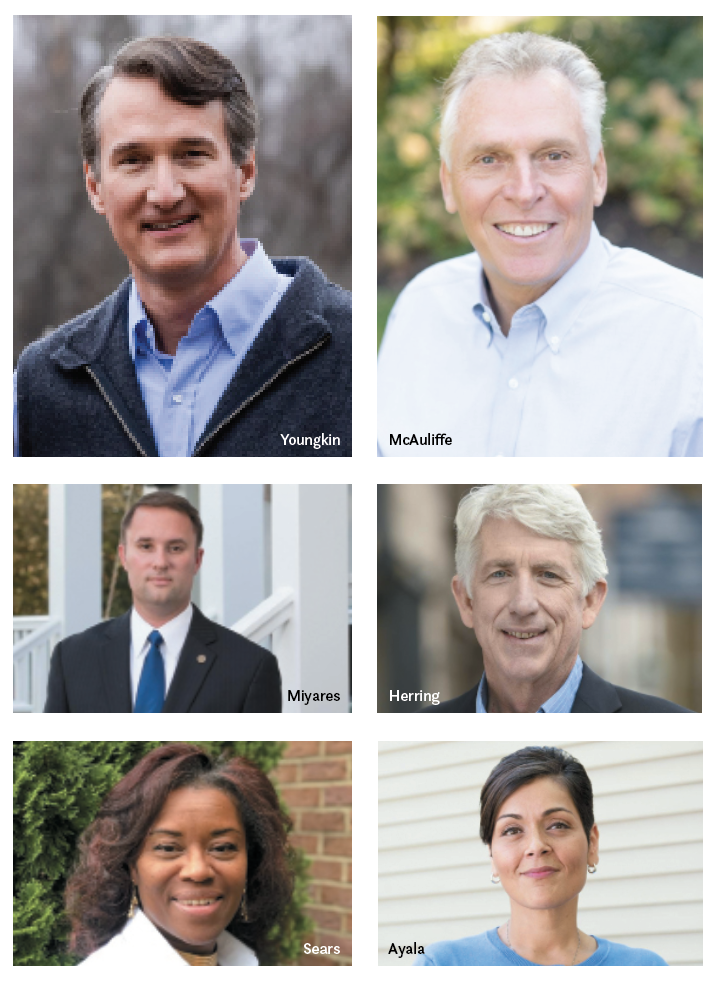 Youngkin, a first-time political candidate and former co-CEO of Washington, D.C.-based private equity firm The Carlyle Group, triumphed over better-known candidates to win the Republican Party of Virginia’s unassembled convention of 30,000 delegates who cast ranked-choice ballots at 39 sites across the state on May 8.

From Jan. 1 through Aug. 31, Youngkin raised $35.26 million, including $16.5 million of his own money, and had $6.03 million in cash on hand. During the same time period, McAuliffe raised $26.06 million and had $12.6 million in the bank. As of Aug. 31, Youngkin had spent $29.24 million to McAuliffe’s $18.99 million — a difference made even starker considering that more than half of McAuliffe’s expenditures went towards campaigning for the June 8 Democratic primary. Spending a combined $48.23 million by Aug. 31, Youngkin and McAuliffe seem on track to match or exceed the record-setting $65 million spent in the 2017 Virginia gubernatorial race.

“Youngkin obviously has immense personal resources to bring to bear here,” says Kyle Kondik, managing editor of the University of Virginia Center for Politics’ political newsletter and website, Sabato’s Crystal Ball. “One thing that’s interesting is that McAuliffe is the one who is trying to nationalize this race, because he wants people to think of Youngkin as Trump so that Democratic voters will be motivated to come out. Youngkin wants this to be more of a localized race. He’s muddying his ideology and political background, representing himself as a nonpartisan business type — almost like Mark Warner in reverse, 20 years later.”

Democrats currently hold a 55-45 seat advantage in the House of Delegates, and Republicans are laser-focused on winning the six seats they need to overturn the Dems’ new, still-vulnerable majority. All but eight seats are being contested by both major parties in 2021.

The governor’s race so far looks like an uphill fight in both directions.

McAuliffe benefits from his quasi-incumbent status but is running against historic trends, given that only one Virginia candidate since the ’70s has won the governorship after their party won the White House. That lone exception? McAuliffe himself.

“We are the ultimate bellwether,” says former state Del. Chris Saxman, executive director of Virginia FREE, a nonpartisan business advocacy group. “We come before and after every major national election. People forget how quickly things can change. One, the losing party is highly motivated to win the next round. Two, the winning team from the previous November doesn’t have nearly the juice it had a year ago.”

Youngkin, however, must contend against antipathy toward Trump and CNBC’s recent ranking of Virginia as America’s “Top State for Business” for an unprecedented second time in a row.

“The Youngkin campaign had a strategy of talking about Virginia’s economy being in a ditch,” says Stephen Farnsworth, a political science professor at the University of Mary Washington. “That strategy disappeared when Virginia was named the No. 1 state for business. That ranking has forced Republicans to retool. When a state’s No. 1, you can’t argue the incumbent has driven it into the ditch.”

Instead, Youngkin pivoted to campaigning on hot-button GOP issues such as critical race theory, as well as claiming that McAuliffe is “too dangerous for Virginia,” citing the state’s 40% increase in murders during McAuliffe’s tenure, while not acknowledging that Virginia was also then the fourth-safest state in the nation for violent crime. Meanwhile, McAuliffe, who supports vaccine mandates for people ages 12 and above, has tried to paint Youngkin, who opposes mandates, as an “anti-vax” extremist, echoing Youngkin’s “dangerous for Virginia” rhetoric.

Second bite of the apple

A close friend of former President Bill Clinton and former Secretary of State Hillary Clinton, McAuliffe spent decades in politics as a fundraiser and chair of the Democratic National Committee before his first run for governor in 2009, when he lost in the Democratic primary. He ran successfully four years later, beating Republican Attorney General Ken Cuccinelli. McAuliffe began his term in 2014 as the state continued emerging from the Great Recession, with seasonally adjusted unemployment rates steadily decreasing from 5% in January 2014 to 2.6% in December 2018. He dubbed himself “the jobs governor” and took glee in traveling around the commonwealth for economic development announcements.

Yet McAuliffe was constrained by a Republican-held General Assembly, which hampered his budget initiatives and frustrated his attempts to adopt Medicaid expansion. His successor, Democratic
Gov. Ralph Northam, has seen more success, especially after Democrats won control of the General Assembly in the 2019 elections.

Virginia has radically changed since then, widely viewed as the most progressive Southern state. Its newly empowered Democratic legislature passed a flood of consequential laws ranging from abolishing the death penalty and legalizing marijuana and casino gaming to mandating that Virginia’s utilities generate electricity from carbon-free sources as soon as 2045. Notably, the Assembly also has mandated increases in the minimum wage, putting Virginia on a course for a $15 minimum wage by 2026.

Virginia’s Democratic Party has shifted leftward, too, but McAuliffe used his fundraising prowess and endorsements to win the 2021 primary over four more progressive and diverse challengers, including two contenders who could have been the party’s first Black woman gubernatorial nominee.

The contest could also prove to be a preview for a potential 2024 Biden-Trump rematch in a state where Biden defeated Trump 54% to 44% in 2020. Trump retains a firm grip on the Republican base, but it’s less clear how much he still drives people to vote against his political party. That variable animates both the McAuliffe and Youngkin campaigns. Youngkin emerged in May as victor of the six-candidate Republican field. A Virginia Beach native who attended Rice University on a basketball scholarship, Youngkin drew attention for his charisma, business background and organizational savvy, building a team that outmaneuvered a slate of more experienced candidates in the GOP’s pandemic-era convention.

His nomination was greeted with near-universal acclaim by Republicans. He achieved it by walking a careful line between the party’s various wings. That balance appears more tenuous during the general election as McAuliffe has sought to pounce on any feint toward social conservatives or Trump on Youngkin’s part. That included a leaked video of Youngkin saying he must limit his comments about abortion for fear of alienating moderate voters, but that he’d go “on offense” if Republicans win. (Abortion moved to the forefront of the gubernatorial race in September, after Texas’ GOP-led legislature passed one of the strictest anti-abortion laws in the nation.)

“Glenn has been an incredible success and will truly Make Virginia Great again,” Trump said in a July statement endorsing Youngkin. “Terry McAuliffe was a failed and unpopular governor whose only claim to fame was his relationship with crooked Hillary Clinton — how did that work out? If Virginia wants to open up and take advantage of its great and virtually unprecedented opportunity, Glenn Youngkin is the very successful businessman that will get them there!”

Youngkin, however, has rarely spoken about the former president, and Trump has made no campaign appearances for Youngkin or other Virginia candidates.

But even if the 45th president remains relatively mute about Virginia, Democrats won’t let him be forgotten.

“Nearly every McAuliffe ad is likely to mention Trump,” Farnsworth says. “It’s a winning hand for the Democrats, and they’re going to use it.”

The races for statewide office and a majority in the House of Delegates will likely come down to a handful of competitive regions, largely around the suburbs of Northern Virginia, Hampton Roads and Richmond.

Over the past two decades, Virginia’s changing demographics steadily inched the state toward Democrats before Trump’s 2016 election dramatically accelerated the trend, especially in the suburbs. Chesterfield and Loudoun counties, for example, swung 7 and 10 points, respectively, toward Democrats between 2012 and 2020.

“People in the suburbs were absolutely repulsed by Donald Trump in Virginia,” Saxman says.

Winning those voters back is a crucial part of the Republican strategy.

“There are a lot of people who either are new to Virginia or maybe voted for Republicans in the past but now are functionally Democrats,” Kondik says. “That’s an important group for Youngkin. He’s not going to win places like Loudoun and Prince William counties, but he can’t get blown out in them as Republicans have in recent years.”

Virginia Beach is another important swing area. If Youngkin can get close to McAuliffe there, Kondik says, he might boost enough down-ballot candidates to flip some of those seats to the GOP. “Even if McAuliffe wins the governor’s race but Republicans flip the House of Delegates, that’s a pretty successful election for them.”