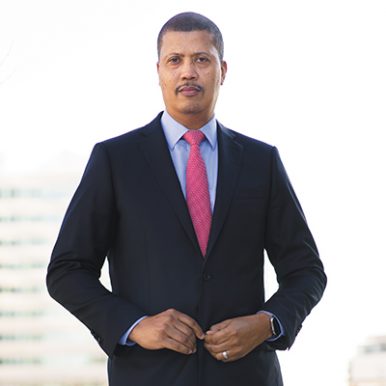 Baine is an example of the American dream made real. He grew up poor, working on his family’s tobacco farm in Lunenburg County, where, he says, he learned the value of hard work, dedication and responsibility. He subsequently applied that lesson during his more than 25-year-long career at Dominion Energy.

Last year, he became the first Black president of Dominion Energy Virginia, a promotion from his previous position as senior vice president of power delivery. A Virginia Tech graduate, Baine is a member of the university’s board of visitors and also the Southeastern Electric Exchange board, on which he serves as first vice president. He has received the Metropolitan Business League’s Oliver Singleton Humanitarian Award and received an Influential Black Alumni Award during Virginia Tech’s 2018 Black Alumni Reunion.

In an interview with Virginia Tech magazine last year, Baine said he gravitated toward Dominion because it was a stable company, but he stayed because it gave him a sense of purpose. “I wake up every day knowing that we provide an essential service to our customers and that they are depending on us.”

Blue became president and CEO of Dominion in October 2020 after Chairman, President and CEO Thomas F. Farrell II transitioned to the role of executive chair for the Richmond-based Fortune 500 utility. In April, Blue also took up the chairmanship of Dominion’s board after Farrell, a business titan known for his involvement in state and local politics, died at age 66 from cancer.

Blue, who joined Dominion in 2005, is known for his unconventional commuting choice — a kayak that he paddles to Dominion’s riverfront headquarters. He took the utility’s helm at a time when Virginia’s state government has mandated that Dominion and other utilities must generate all electricity from carbon-free sources by 2045. Among Dominion’s strategies for reaching that goal is the $7.8 billion offshore wind farm it’s developing 27 miles off the coast of Virginia Beach.

A native of Albemarle County, Blue graduated from the University of Virginia and Yale Law School and holds a master’s degree from U.Va.’s Darden School of Business. He previously served as legal counsel and policy director for Gov. Mark Warner and was also a partner at Washington, D.C., law firm Hogan & Hartson (now Hogan Lovells).

Feuerberg leads one of the largest electric cooperatives in the country. The nonprofit Northern Virginia Electric Cooperative has almost $1 billion in assets and serves about 175,000 customers in six counties and two municipalities, including Fairfax, Loudoun and Prince William counties.

He has headed NOVEC for almost 30 years and has driven its divestment in coal in favor of natural gas and renewable energy sources, including a biomass power plant and multiple solar installations. Feuerberg also leads the board that oversees NOVEC’s subsidiaries. During the pandemic, the University of Nebraska-Lincoln engineering and law graduate says, the cooperative responded to community needs, such as meal deliveries for health care workers and first responders.

The co-op also has focused attention to extend fiber connectivity in its coverage area, providing broadband access to 1,000 homes in northern Loudoun, which has struggled with poor internet coverage, despite Ashburn’s prominence as the “Internet Alley” through which 70% of the world’s internet traffic is routed.

“The need for high-quality, high-speed broadband has never been more in demand,” Feuerberg says.

Under his decadelong leadership of AES, Gluski has decreased the company’s dependence on coal, which once represented 60% of its portfolio, as it moves rapidly toward providing affordable, sustainable energy to the 14 countries it serves.

The Venezuela native sees huge potential in energy storage and believes it will bring reliability to the green energy movement. He called it “the holy grail of renewables” in an interview with trade magazine Utility Dive. “If you ask me what the greatest challenges are, say, in the next decade, it’s really having enough supply of everything. This means land, this means people, this means batteries for energy storage, this means wind turbines, and this means solar panels,” he said.

Gluski’s reorganization of the Fortune 500 company has led to $250 million in annual savings while adding more than 5,000 megawatts of capacity. AES ended the first quarter of 2021 with revenues of $2.635 billion, a 12.7% increase from the previous year.

The Edison Electric Institute has honored Gluski with five International Edison awards. The University of Virginia alum earned his master’s and doctoral degrees in economics from the school, and he previously served as Venezuela’s director general of public finance. He also chairs the Council of the Americas board.

A graduate of the University of Tennessee and George Washington University, Hewa recently served as chair of the nonprofit U.S. Energy Storage Association, and he’s currently a board member of the Virginia Chamber of Commerce.

REC has 170,000 connections made through 17,000 miles of line in 22 counties stretching from the northern Shenandoah Valley to the Middle Peninsula. “Our goal is to be always on,” Hewa says, but he faced a challenge to that ideal this winter when ice storms led to 20,000-plus outages in his far-flung service area.

Hewa is also a champion of smart-grid technologies, and one of his focuses is on closing the rural digital divide. Under his leadership, REC has been installing a “fiber backbone network” to support broadband rollouts and point-to-point service, aligning with the Northam administration’s goal to deliver broadband access to the entire state by 2023.

Leopold always has been a trailblazer. One of only two women in her University of Sussex graduating class in England, she became the first female power station engineer at Pepco in 1989, in part, she says, because of her willingness to scale a 500-foot smokestack.

Since joining Dominion in 1995, Leopold has continued to climb to new heights in an industry that is heavily male dominated. Last year, she took on her current role, which, among other duties, includes oversight of Dominion Energy Virginia, which provides electricity to 2.7 million customers in Virginia and northeastern North Carolina, and of Dominion Energy South Carolina, which serves 1.1 million customers.

Last year, Leopold, who holds business and engineering degrees from George Washington University and Virginia Commonwealth University, was named chair of the American Gas Association. She is also a trustee of Virginia Union University and serves on the board of the GO Virginia Foundation, the nonprofit arm of the state economic development initiative.

Leopold is not one to sit still either at work or in her off hours. She has logged more than 450 skydiving jumps, rappelled down a 20-story building for charity and climbed Mount Kilimanjaro.