Buryl Alfieri, president and CEO of New Bell Truck Lines Inc. in Chester, knows what it takes to retain its most precious assets — its truck drivers.

“Our dispatcher works weekly with each of the drivers to make sure their needs are being met,” she says. “Our drivers are home weekly, and most of the time they are home on weekends. Many drivers from other companies are on the road for two to three weeks at a time. It’s important for us that our drivers get home to spend time with their families.”

New Bell’s trucks transport food, paper, plastics and other general commodities. “The truck backs up to the dock and picks up a full truckload and then takes it to its destination,” Alfieri says.

Alfieri credits the company’s growth in part to her drivers, but finding qualified drivers isn’t as easy as it was years ago. Recruiting and retaining drivers is the biggest challenge facing the trucking industry today, she says. “There are not enough people that want to drive trucks anymore. It’s hard to find that demographic,” she says. “All trucking companies are competing for drivers.”

The pool of qualified drivers keeps churning. Driver turnover in most trucking companies is around 100 percent over the last two years. New Bell’s turnover is less than half that — 43 percent.

“Once you get them in the door you have to keep them,” Alfieri says. “We treat every driver as part of the family. Customers are important, but if we don’t keep drivers happy, then that affects our growth.”

Many times the company will work the schedule of its deliveries around its drivers’ needs. “With a shortage of truck drivers, you have to put drivers first,” she says.

Instead of having salaries or hourly wages, drivers are paid according to the number of miles they drive each week. New Bell drivers make 42 cents per mile.

New Bell works with drivers to maximize the miles they drive during the days they are on the road. “We make sure we spend the time looking at the miles to make sure they get as many miles as they can in order to make them happy,” Alfieri says.

This year the company will add profit sharing to its list of employee benefits. “This should be a great boost for retention,” Alfieri says. “I am excited to be able to give back profit to the people that have helped us grow.”

She founded the company in 2010 after working 28 years for a trucking company as its vice president of operations. “I watched that company get off the ground,” she says.

Alfieri decided to start her own business after she noticed a shortage of trucking companies after the 2007-09 recession.

Her initial costs included the purchase of trucks and trailers. “A new truck costs over $100,000 and a new trailer over $30,000,” she says. “At the time the banks were not lending money. I was fortunate in that I had a generous 401(k), so I self-financed the company. I bought two used trucks and two used trailers. I had enough money for payroll and cash flow left over.”

She hired a safety manager to ensure the correct handling of driving, hiring and maintenance issues. “The Department of Transportation visits each new trucking company during the first six months to make sure all government regulations are being followed or they can shut you down,” she says.

Alfieri worked to build a loyal customer base in Central Virginia. She was able to secure more business each time she increased the size of her fleet. “We also recruited owner/operator drivers that own their own equipment to help us in servicing our customers,” she says. “By the end of the first year, we had enough drivers on board and were busy enough that I hired an operations manager.”

The company now has 25 trucks and 10 owner/operators as well as eight office/administrative employees.

New Bell’s trucks travel to all 48 mainland states “but we try not to go to the Northeast,” Alfieri says, noting that staying out of the crowded Northeast traffic is another benefit that her drivers enjoy. “If you can’t compete in the drivers’ market, you can’t grow.” 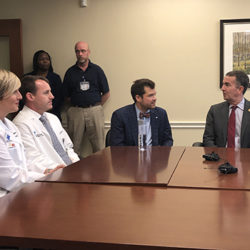