What does business want from higher education, and what are colleges and universities delivering?

If you haven’t considered those questions, you could have learned a lot from “Quality and Value in Virginia’s System of Higher Education,” a conference held in June in Richmond.

The goal of the conference, sponsored by the State Council of Higher Education for Virginia (SCHEV), was to develop a unified vision of the role that colleges and universities play — in educating citizens and creating a skilled workforce.

But at the end of the day, there still were a lot of questions.

The sometimes uneasy partnership between business and higher education is reflected in a study released last year as part of an annual poll by the consulting firm Gallup and the Lumina Foundation.

The poll found that 96 percent of college and university chief academic officers nationally were confident in their institutions’ ability to prepare graduates for the workforce.

By sharp contrast, just 11 percent of business leaders strongly agreed that today’s college graduates have the skills their companies need.

How are colleges measured?
Edna Baehre-Kolovani, president of the 42,000-student Tidewater Community College, expressed her concern about one focus of the conference: the return on investment sought by various stakeholders that colleges and universities serve, including students, the business community and the legislature.

“We serve everybody. We don’t carve out one niche of the population and say that’s the only population we’re going to serve,” Baehre-Kolovani said.

She also mentioned one of the major issues in the relationship between business and higher education: how the performances of colleges are measured.

“We are not measured on the long-term effects of our graduates in the workplace,” Baehre-Kolovani said. “Our accreditation is based on times to completion and how many students we get through the pipeline.”

Linda Cabe Halpern, vice provost for programs at James Madison University, said every institution of higher education in Virginia needs to be involved with businesses in their regions and to know what those companies’ needs are.

Yet, she suggested, the path to a career and a happy, productive life — on the job and off — is not a narrow one for students. Their overall college experiences — including exposure to ideas outside the classroom and beyond their majors — also are vital.

“That is the moral challenge of our time. [Higher education] is the key way out of poverty, yet we’re failing miserably,” she warned.

Ithaka S+R, a New York-based consulting and research firm, presented a report to SCHEV earlier this year showing that fewer than 25 percent of the lowest-income Virginia students enrolled in a public institution of higher education were attending four-year institutions, compared with 90 percent of high-income students.

“This is particularly troubling since only 5 percent of students who enroll full time in a two-year college earn an associate degree within two years and only 2 percent earn a bachelor’s degree (through transferring to a four-year institution) within four years,” the study said.

Seeking soft skills, too
Several speakers pointed out that, besides technical knowledge and skills, employers are looking for workers with soft skills, such as the ability to communicate or to solve problems in diverse settings.

Debra Humphreys, a vice president with the Association of American Colleges and Universities, relayed a comment made by recruiters at several engineering companies.

“They all said they need good engineers, but they need engineers who can write,” Humphreys said, as laughter rumbled through the room.

Filling the gap
Barry DuVal, president and CEO of the Virginia Chamber of Commerce, praised the relationship between business and higher education in Virginia, but he left no doubt as to what companies in the commonwealth need.

Asked in a survey about their biggest priorities, the response of chamber members was resounding. “What they wanted the governor and General Assembly to focus on was creating a ready workforce,” DuVal says, adding that higher education is a huge part of that effort.

He says if Virginia’s economy grows only 2 percent a year, the state will need 2 million new workers by 2025. Forty percent of those workers will require four-year degrees. The rest will not.

Business leaders, however, stress that an increasing number of jobs require intensive training and education beyond high school to compete in an expanding, global knowledge economy.

The big problem: Virginia doesn’t have enough skilled workers to fill many of the jobs needed to keep its economy humming. “We have a workforce gap, and your institutions play an important role in filling those gaps,” DuVal told educators.

Frightened parents
Teresa Sullivan, the president of the University of Virginia and a labor force demography scholar, said that today’s college students still face the ripple effects of the Great Recession, which officially ended six years ago.

She recently taught a freshman seminar in which students read a book titled, “The Coming Jobs War.”

“I asked them, ‘Would you give this book to your parents to read?’ The entire class, as one, shook their heads,” Sullivan recalled.

The book would only add to their parents’ anxiety about the students’ job prospects, they said. “One student told me her mother called her every night and cried on the phone,” Sullivan said.

Influential experiences
Despite such worries, one study discussed at the conference, the “Gallup-Purdue [University] Index of Great Jobs and Great Lives,” suggests that certain college experiences can have a great influence on graduates’ lives and their careers.

The 2014 study posited that there is a significant association between six influential experiences and the “engagement” of graduates in the workplace.

“Engagement is more than job satisfaction,” the study said. “It involves employees being intellectually and emotionally connected with their organizations and work teams because they are able to do what they’re best at, they like what they do at work, and they have someone who cares about their development at work.”

Those influential college experiences include:

In essence, the proposition is that supportive teachers and learning gained from experience can help graduates be more engaged in their work and carry with them a lifelong sense of well-being.

Timothy Sands, the president of Virginia Tech, cautioned that the relationship between college experiences and engagement in the workplace is still being explored, but he suggested that the implications could be profound. “This is the kind of thing that could really change higher education,” he said.

In the meantime, Leanna Blevins, acting executive director of the New College Institute in Martinsville, urged her higher-education colleagues not to get caught up in theories in discussing their work with businesspeople.
She recalled the blunt comment of one economic development director about college graduates: “He said, ‘I want to know whether they can work and whether they can think — that’s all I want to know.’” 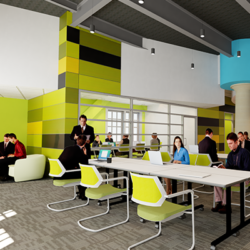 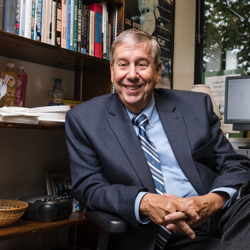