An influential Virginia economist has revised his forecast on the effects of sequestration, saying that it will cost Virginia fewer jobs than originally expected. 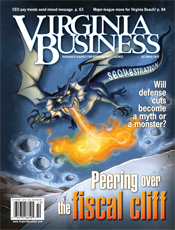 Stephen Fuller, director of the Center for Regional Analysis at George Mason University, predicts the automatic federal budget cuts that went into effect March 1 will eliminate 154,118 jobs in the Old Dominion. That figure is 26 percent lower than the 207,571 job losses Fuller predicted in a study released last July.

Fuller’s original figure has been widely quoted, including a Virginia Business cover story on sequestration last October and an editor’s column in the April issue.

The new report says sequestration will reduce the nation’s gross domestic product (GDP) this year by 1 percentage point, $158 billion, and decrease personal earnings by $80.5 billion this year.  The original estimates were a $215 billion drop in GDP and a $109.4 billion decline in personal earnings.

The economist’s revised forecast results in part from the delay in implementing sequestration, from Jan. 1 to March 1, caused by Congress’ passage of the American Taxpayer Relief Act at the beginning of the year. In addition to delaying the budget cuts, the law also continued Bush-era tax cuts for taxpayers except those earning more than $400,000 a year. For that group, the top marginal tax rate rose from 35 percent to 39.6 percent.

Fuller’s new report says that the budget cuts that went into effect on March 1 totaled $85.4 billion, less than originally expected. Cuts will be greater in the next fiscal year, $110 billion, the report says.
The revised analysis also takes into account the fact that federal agencies plan to furlough employees rather than terminate them in order to accommodate budget cuts.