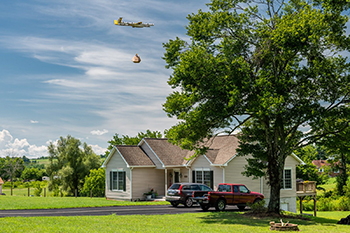 Flying at more than 70 mph, the 10-pound drones will deliver orders for FedEx, Walgreens and area retailer Sugar Magnolia. The drones lower cargo weighing up to three pounds into customers’ yards, making deliveries in as little as five to 10 minutes.

Wing partnered with the Virginia Tech Mid-Atlantic Aviation Partnership (MAAP) to develop the service, which will eventually take flight in other cities across the nation. The drones made their historic first deliveries in three suburban yards Friday, witnessed by officials from the White House, the Federal Aviation Administration, Wing and Virginia Tech, including Virginia Tech President Tim Sands.

“When Wing first began talking with the Mid-Atlantic Aviation Partnership, we knew immediately this was a project the university should support,” said Sands. “We like bold, visionary ideas, strong partnerships, and the challenge of doing something that’s never been done before.”

“This is a big day for Wing, MAAP, and Virginia — another first in this industry that is happening right here in our commonwealth,” said U.S. Sen. Mark Warner in a statement. “I believe that unmanned systems have the potential to be a real game-changer, and I’m proud that Virginia is leading the way in testing and safely integrating this technology.”

According to MAAP and Wing officials, the drones can transport packages quicker than ground transportation with far less of a carbon footprint.

“This is a pivotal moment in aviation,” said Mark Blanks, MAAP’s director. “Package delivery has been one of the most sought-after applications for unmanned aircraft, but doing it well requires solving some of the hardest problems in the industry. It’s a privilege to partner with Wing to enable a service that we believe will transform the industry and bring real value to our communities.” 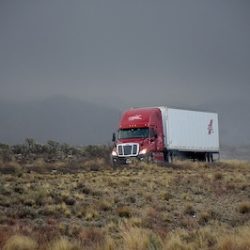