When Larry Stimpert’s grandfather ran the family’s Illinois farm, it was an embodiment of diversity. It had sheep, cows, hay, oats, corn, soybeans and orchards.

“It was a very sustainable kind of thing,” Stimpert says. “Today, my cousins farm the farm, and it’s just corn and soybeans. Nothing else.”

For decades, American agriculture has held up farms like the one run by Stimpert’s cousins as the model, mass producing raw materials for foodstuffs to efficiently feed a growing population. That’s still a profitable way to farm, and it’s still the dominant approach to agriculture in the United States. But a growing number of people, including Stimpert, see a great deal of value in the more traditional approach. 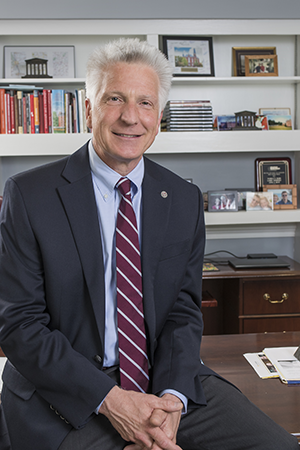 Stimpert, inaugurated as the 25th president of Hampden-Sydney College in April, also sees a lot of value in its traditional approach to education. In fact, he says, “The world needs Hampden-Sydney more now than at any time in our 240-plus years of existence.”

The college’s first president, Samuel Stanhope Smith, defined the mission about the time classes began in November 1775: “To form good men and good citizens in an atmosphere of sound learning.”

The college’s current task, Stimpert says, “is to double down on our mission.”

One of only three men’s colleges
The mission is limited to men. Hampden-Sydney, in fact, is one of just three all-male, four-year colleges left in the United States. The other two are Morehouse College in Atlanta and Wabash College in Crawfordsville, Ind. It’s a system that works very effectively for some male students.

“I was a far better student in college than I was in high school,” says Greg Danahy, a 2008 Hampden-Sydney graduate and president of the college’s Roanoke alumni chapter.  Hampden-Sydney’s single-sex education wasn’t the only reason he improved as a student, but Danahy says it helped. During the week, Danahy played soccer — he was recruited to play for the college — and studied. He didn’t worry about what women in his classes thought of his comments or his questions because there weren’t any women students. But he wasn’t living a monastic life.

“If you go to Hampden-Sydney on a fall weekend, and you know nothing about it, if you just showed up, you probably wouldn’t be able to tell it was an all-male school,” Danahy says. “But Monday through Friday, that distraction wasn’t there.”

Hampden-Sydney’s size helps students focus, too. The school has just over 1,000 students on its 1,340-acre campus. That means small classes and lots of contact with professors. 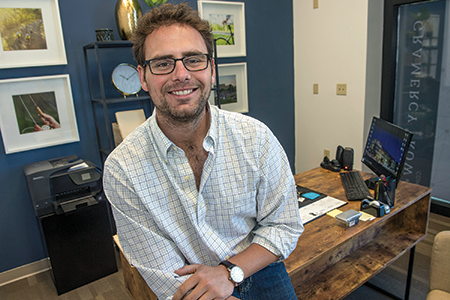 “My biggest class while I was there was 31 students,” Danahy says. “It was an intro to psych class. My smallest was my second-semester rhetoric [class]. There were four of us. That wasn’t an elective. That wasn’t a specialty course. Every single student at Hampden-Sydney has to take rhetoric.”

Danahy’s adviser regularly invited students to dinner. Once, when Danahy was struggling to prepare for a psychology exam, he called his professor. It was about 10 p.m. the night before the test. The professor came to campus to make sure his student understood the material. Hampden-Sydney professors, Danahy says, “are so invested in you, if you’re trying, they’re not going to let you fail.”

‘A brotherhood’
That “such and such” may involve more than academics. “Ever since we were founded in 1775,” Stimpert says, “this has been a place where we’ve always emphasized a lot of character development in addition to the academic training.”

Hampden-Sydney’s honor code says students “will not lie, cheat, or steal, nor tolerate those who do.” The conduct code demands they “behave as a gentleman at all times and in all places.” The system requires Hampden-Sydney students to police themselves and their peers.

“Our students live with those codes,” Stimpert says. “They enforce them themselves. We have a strong emphasis on self-government here.”

The new college president believes the old system works. “Almost every alum I’ve talked with tells me how this place has transformed him in powerful ways,” Stimpert says.

That experience builds a powerful bond. “We talk about the college as a brotherhood,” Stimpert says. “I would say what really strikes me about that brotherhood is it’s certainly something that extends far beyond the four years our students are here on campus.”

The Princeton Review, for example, says Hampden-Sydney has the ninth-best alumni network in the country. “That puts us ahead of every Ivy League college except for Dartmouth,” Stimpert says, “and I tell people we’re going to beat them soon.”

Dartmouth is second on the list. Wabash is No. 1.

Rhetoric is mandatory
One aspect of the academic program that may seem old-fashioned is fairly new, by Hampden-Sydney standards. The rhetoric program will celebrate its 40th year in 2018. Every Hampden-Sydney student must take two semesters of rhetoric and pass a rhetoric proficiency exam, a three-hour essay-writing exercise. No one graduates without passing that exam.

“It really helps shape the kind of student you can expect to be walking across the stage at Hampden-Sydney,” Danahy says.

The experience also helps after stepping off the stage. “I think it separated me from my peers with my ability to communicate,” he says. “People notice if you’re a well-spoken and well-written person.”

Stimpert agrees. “I do think that’s a marquee program for us, and it’s so important, young men being able to express themselves well,” he says. “All the time I have alumni telling me, ‘You know, the rhetoric program at Hampden-Sydney College, it’s the best thing I ever did.’ I have alumni tell me, ‘I’ve become the editor of my department or unit or office. Nobody hands anything in to the boss until the Hampden-Sydney guy has read it.’”

Such an education is not without its burdens. “I had one alum come up and say, ‘Hampden-Sydney ruined me,’” says Stimpert, “and I said, ‘How’s that?’ And he said, ‘I can’t stand bad writing now, and it’s everywhere.’”

Even with the program’s vaunted reputation, it doesn’t try to turn all Hampden-Sydney grads into poets and playwrights. According to Gordon Neal, a 2009 Hampden-Sydney graduate and the college’s director of communications and marketing, the most popular employment fields among recent graduates are banking, finance and management. Those recent graduates are earning $45,000 to $50,000 annually.

A challenging business model
Hampden-Sydney’s honor code and its emphasis on rhetoric connect it to its past, but the school also is looking toward its future. The oldest section of the college’s Winston Hall was constructed in 1880 to serve as the library of Hampden-Sydney’s theological seminary. (The school, now known as Union Presbyterian Seminary, moved to Richmond in 1898.) The newer parts of the building were added in 1936 and 1962.

A $4.7 million renovation completed this spring has turned the building into Brinkley Hall, home of the new Joe Viar and Bonnie Christ Center for the Arts. Brinkley Hall is scheduled to open in August.

The $11 million Brown Student Center — the college’s first student center — will house the Flemming Center for Entrepreneurship and Innovation, part of the college’s push for experiential learning.

New and refurbished buildings are nice, but their price tags illustrate a challenge facing virtually every American college.

“I’m a business professor by training,” Stimpert says. “I think the business model around higher education is very challenging.” The enterprise is, as Stimpert points out, “very labor intensive.”

That is particularly true at a small liberal-arts college with a student-to-faculty ratio of 10-to-1. “The big change over the last 20, 30 years is that colleges have also become very capital intensive, too,” Stimpert says.

Technology, labs, athletic facilities — are all expensive, he says, and that means a modern college needs a diverse stream of revenue. Tuition and fees must be supplemented through endowments and fundraising campaigns, so a modern college president must be adept at rainmaking as well as scholarship.

All that seems to come together for Stimpert, who says Hampden-Sydney will distinguish itself in the marketplace by providing a better college experience for young men than they can find anywhere else.

“You go into these jobs because you want to make a difference,” Stimpert says. “I think there is nothing more valuable than educating young people, preparing young people to go on to have lives of consequence.”