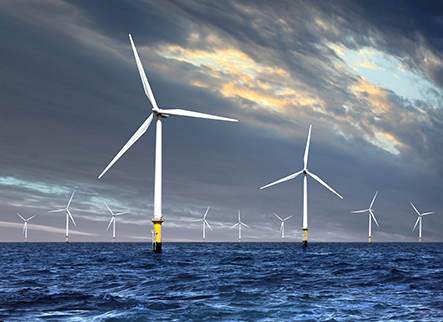 Dominion Energy has filed a proposal to build 220 turbines off the coast of Virginia Beach by 2026, building on its offshore wind pilot project under construction now.

If approved, the estimated $7.8 billion project would be the largest wind energy development in the nation and is expected to produce 2,600 megawatts of energy — enough to power 650,000 homes.

The energy company announced Thursday that it had filed an application with PJM, the regional transmission organization that coordinates the electrical grid in 13 states and Washington, D.C., to connect the turbines to the transmission grid.

Dominion began construction on its $300 million Coastal Virginia Offshore Wind (CVOW) project in June. Dominion is working with Denmark-based power company Ørsted to erect two 600-foot-tall, 6-megwatt wind turbines 27 miles off the coast of Virginia Beach by the end of 2020.

This week’s filing is the first step toward expansion. In 2020, Dominion will start ocean survey work and submit a construction and operations plan to the Federal Bureau of Ocean Energy Management in 2022.

More than 70 turbines, standing about 700 feet tall, will be constructed during each of three phases if the plan is approved, with the first phase set to come online in 2024. The second phase is scheduled for completion in 2025, and the third in 2026.

Each phase is estimated to cost $2.6 billion, a figure based on sourcing components from a European supply chain, although Dominion spokesman Jeremy Slayton said Thursday that the company “will relentlessly pursue” a U.S.-based supply chain and workforce in Hampton Roads to drive down costs.

Ultimately, Dominion plans for 220 turbines on 112,800 underwater acres that the company is leasing from the federal bureau.

Although Ørsted installing the two 600-foot turbines for the pilot, Slayton says that the company will “run a competitive process to determine the turbines we use for the [additionak] commercial offshore wind project.”

According to Mark Mitchell, vice president of generation construction at Dominion Energy, the only companies equipped to install offshore wind turbines are in Europe because the U.S. doesn’t have a vessel large enough — although people in Virginia and elsewhere are looking to change that in short order.

Slayton added Thursday that Dominion's estimated power generation cost per megawatt-hour is $90, but Dominion expects that to go down as a U.S. supply chain develops and turbine efficiency increases. In Europe, which is ahead of the U.S. in terms of wind energy, customer energy costs have lowered over the years, Slayton added.

The project is part of Dominion’s investment in solar and wind energy, with a goal to reduce carbon emissions by 55% by 2030. Dominion also is planning investments in battery storage, zero-carbon nuclear and low-carbon natural gas, according to its press release.

On Tuesday, Gov. Ralph Northam signed an executive order setting goals that 30% of the state’s electrical system will be powered by renewable energy sources by 2030, and by 2050, all of the state’s electricity will be produced by carbon-free sources, including wind, solar and nuclear energy. Northam’s plan includes that up to 2,500 megawatts of offshore wind power is fully developed by 2026, which the Dominion Energy proposal accomplishes.

“Offshore wind is an excellent renewable energy source, and this filing with PJM shows how serious we are about bringing commercial-scale offshore wind to Virginia, giving our customers what they have asked for — more renewable energy,” Mitchell said in a prepared statement. “Gov. Ralph Northam has made it clear Virginia is committed to leading the way in offshore wind.”