Standing near the grand entrance of upcoming entertainment venue and food hall The Park at RVA, Orcun Turkay says he’s excited for the future of Richmond’s newly branded Diamond District. He calls it “Scott’s Addition 2.0,” referencing the trendy adjoining neighborhood.

Exact plans for the Diamond District, which will include a replacement for the city’s Minor League Baseball stadium, The Diamond, are not yet set, but Richmond City Council is expected to choose a developer soon.

Excitement about the new district is fueling adjacent projects like The Park at RVA, which plans to open this fall.

Located along Interstate 95 within view of The Diamond, The Park at RVA will offer duckpin bowling, mini-golf and multiple bars and restaurants, as well as a 200-seat venue for music and comedy shows. It will be housed in a 55,000-square-foot space on the second floor of a two-story industrial building owned by the project’s lead investor: Alexandria-based heating, ventilation and air conditioning contractor Michael & Son Services Inc. (CodeRVA, a regional magnet school for computer science,
is the first-floor tenant.)

Turkay, The Park at RVA’s managing partner and vice president of operations, says the venue will offer more entertainment options under one roof than anywhere else in Richmond: “You can go to food halls and arcade bars, but not everything at once.”

Plans to redevelop the area surrounding The Diamond into a new mixed-use, mixed-income district built around a new stadium started a few years ago during discussions for the city’s Richmond 300 master plan for growth. This summer, the city narrowed the field to three competing development teams, which were pared to two finalists in August. There’s pressure to move forward, as work must begin quickly on a new Richmond Flying Squirrels stadium to meet newly adopted league facility standards and open by March 2025.

Greater Scott’s Addition Association board members have endorsed development team RVA Diamond Partners, a joint venture including Washington, D.C.-based Republic Properties Corp., Chicago-based Loop Capital Holdings LLC and Richmond-based Thalhimer Realty Partners Inc. “We made it extremely clear to the city … that we want this to happen,” says Rob Long, president of the board. “This is an awesome project.” 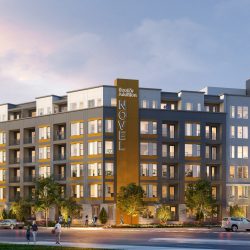