The “merger of equals” will be effective June 1, a company spokesperson said. The new firm will have more than 5,400 employees across 68 markets in 27 states, the United Kingdom and the Cayman Islands.

BKD CEO Tom Watson will serve as CEO of the new organization and DHG CEO Matt Snow will serve as the firm’s chair. The combined firm will operate under a new name that will be announced at a later date.

“For years, both BKD and DHG have built strong reputations as high-value, professional client service firms,” Watson said in a statement. “We’ve established complementary geographic footprints and strong capabilities in a range of critical service sectors. Together, as one organization, we will deepen our bench strength even further, allowing us to continue to serve our existing client base while also providing the resources necessary to serve an ever-increasing upstream client base.”

Charlotte, North Carolina-based DHG has 298 employees in Virginia, including about 150 certified public accountants. Of DHG’s nearly 300 Virginia workers, 80 are based in Richmond, 37 are in Norfolk and 181 are in Tysons, according to a company spokesperson. DHG has about 2,000 total employees across 13 states and the United Kingdom and ranks in the top 20 professional service firms in the country.

BKD, which does not have a presence in the commonwealth, has about 3,300 employees and ranks in the top 10 professional services firms in the country.

At the time of the 2011 merger, Goodman had 202 employees in Hampton Roads, including 85 CPAs at offices in Virginia Beach, Norfolk and Newport News, according to The Virginian-Pilot. Goodman’s total workforce was 568 at the time, including 252 CPAs at offices in Virginia, Maryland and Washington. Goodman’s roots date back to 1932, when it was founded in Norfolk and became larger as it merged with four local firms in 1969 and decades later expanded into Northern Virginia.

Former DHG Mid-Atlantic region leader Gary Thomson said the merger was not surprising. “The firm [DHG] is merging with, BKD, has been a friend … for a long time,” said Thomson, now managing partner of Richmond-based Thomson Consulting, a CPA consultancy. “Mergers like this are always interesting, and the dynamics of this firm — now $1.4 billion, a top 10 firm — certainly moves the needle.”

The merger, he said, also creates an opportunity for small to midsize accounting firms because some clients may look at the merger and decide they don’t may not want to be represented by that large a firm. “I think it’s kind of win-win, depending on your perspective and what kind of client you’re looking for,” said Thomson, a former chair of the Virginia Society of CPAs (VSCPA).

The accounting industry is changing, Thomson noted. While some midsize firms are doubling down on their desire to remain smaller and independent, he sees the DHG BKM merger as doubling down on an opportunity “to really go upstream and serve clients of all sizes.”

The strength that comes from combining resources is something the leaders of the two firms emphasized in their remarks about the merger.

“I couldn’t be more thrilled to join forces with BKD,” Snow, DHG’s CEO, said in a statement. “The scale of our combined firms, our collective talent and similar cultures will translate to tremendous benefits for our clients and team members. Both of our firms have an overlapping industry focus in health care, financial services and private equity, coupled with other industry sectors where each legacy firm is individually strong. As one organization, we will be able to bring our capabilities to a broader range of clients, providing more innovative, client-centric services to the market.”

A spokesperson from DHG did not comment on the possibility of layoffs, but said she expects the integration process to take 18 to 24 months to complete.

“We believe that as a national firm, we will create opportunities for our people that we couldn’t have imagined a few years ago.  It is too early in the process to really be able to speak to internal structure or job elimination. We will approach the integration with a people-first approach and seek to have the best interest of our team members as our priority as we make decisions about the future,” said Alice Grey Harrison, spokesperson for DHG. “When the merger is complete, we will have a significantly larger national presence that will allow us to quickly pivot to several strategic expansion markets and expand our global reach.”

VSCPA President and CEO Stephanie Peters said, “I look forward to having a top 10 firm in Virginia — another one,” noting that the Big Four accounting firms and many other large firms also have a presence in the commonwealth. “There’s a lot of action going on as far as mergers these days, so that’s not at all surprising. I certainly look forward to the new firm.”

When asked about the possibility of any post-merger layoffs, Peters said, “There’s so much demand right now for people in the profession that it wouldn’t be something I would think would be of concern. I would think it would create more opportunities for them to have greater resources, greater access, to be able to do what they do better.” 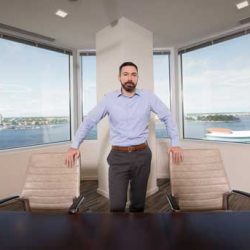