But first, says EYA Senior Vice President A.J. Jackson, archaeologists have been uncovering layers of Virginia history dating back to 1749.

The Robinson Landing plan will include 26 town houses, 70 condominiums, retail space, a renovated pier, floating docks and a promenade along the Potomac River.

Archaeologists from Thunderbird, a division of Wetland Studies and Solutions Inc., are working with EYA and the city in exploring the site’s past.

The waterfront spot, for example, was once the location of Pioneer Mills. Built in 1854, the building was six stories tall, made of brick, stone and slate. It dominated the Alexandria waterfront for more than 50 years until it was destroyed by fire in 1897, according to Alexandria city records. The site was later a bakery and eventually the Robinson Terminal South warehouse, Jackson says.

“Layers and layers of archaeology have been explored,” he says. “There’s early 20th century on top of mid 19th century, 18th century, a lot of building foundations. The artifacts point to the history of Alexandria. There’s petrified hardtack bread, Spanish coins or beads, seeds from South America or Africa, pottery and cookware fragments.

“We’ve recovered a lot of stone that we are going to be able to use on site. We’re giving some to the city for waterfront parks for redevelopment,” Jackson says. “We’re bringing that history back to life.”

All the buildings on the site have been demolished, except for one structure that’s going to be reused, he says. Construction is scheduled to begin this year.

Sales on condos and town houses opened in November, and 16 units sold in a month.  The first residents of Robinson Landing will move in this summer, he says, while a second group is expected to move in about a year later. The final condo building is expected to open at the beginning of 2020.

The existing pier will be converted into public space with seating, day slips for boats and an outdoor lounge, along with landscaped park areas. 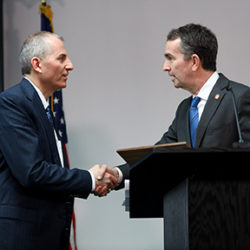 McLean-based IT contractor will provide support to Bureau of Diplomatic Security.