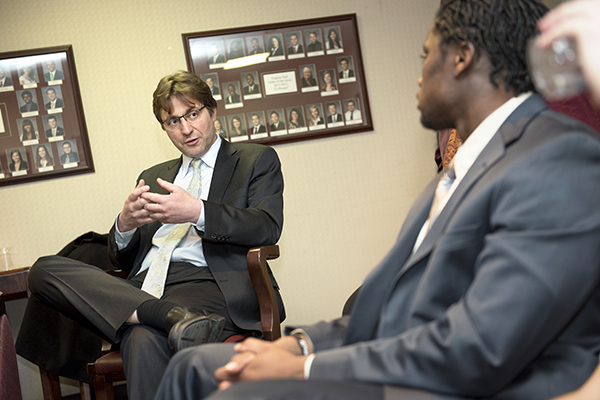 Virginia Tech does not intend to be second-rate. It has designated five “destination areas,” spheres in which the university intends to be a global leader by developing teams aimed at solving 21st-century problems.  (See interview with Dennis Treacy, rector of the Virginia Tech Board of Visitors)

These teams will work not just across disciplines and traditional academic divides, but also across the boundary between campus and commerce, collaborating with companies and involving students in real-world challenges. A team might, for example, include engineers, designers, programmers, technical writers, marketers, company representatives and line workers.

That approach to problem solving may sound revolutionary, but Rikakis calls it evolutionary. Destination areas put interdisciplinary studies on steroids and yoke them to an expansive, modern interpretation of a land-grant university’s traditional mission.

New land-grant mission
Since Virginia Tech’s founding in 1872, land-grant colleges have sought to bridge the gap between academic study and practical application. The most visible manifestations were research stations and extension offices that applied science to agriculture. As society evolved, so did Virginia Tech’s focus. It still tries to close that gap between the academy and the economy, but the Virginia Corporate Research Center in Blacksburg may be more representative of the modern land-grant mission. It was created in 1985 to attract existing tech companies while incubating new ones.

Virginia Tech’s creation of destination areas is the next step, building on the university’s strengths to solve complex global, systematic problems. Virginia Tech still needs to do things that benefit Virginia, Rikakis says, but it needs to do them in a global context.

Choosing destination areas meant Virginia Tech had to focus in on its greatest strengths. “Nobody is going to believe you’re a leader in a complex space if you’re not a leader in the components of the space, right?” Rikakis says.

But strength within the constituent disciplines wasn’t enough. The university also needed strong partnerships beyond its campus, linking up with companies facing issues the destination areas are meant to confront. The last element was faculty buy-in. It’s difficult to succeed if the people leading and coordinating the effort aren’t enthusiastic about the mission.

Intelligent Infrastructure
Intelligent Infrastructure provides a good example of how the destination areas were chosen and how broad they can be. This sector includes automated vehicle systems; smart design and construction; energy; and ubiquitous mobility, which the Virginia Tech website describes as the “location-agnostic promise of news communication and information technologies.”

“It just so happens that we’re great in all four,” Rikakis says. “So Intelligent Infrastructure was a great area for us to claim leadership because we were very, very good in the components. We just have to put them together and then re-imagine the built environment of the 21st century.” 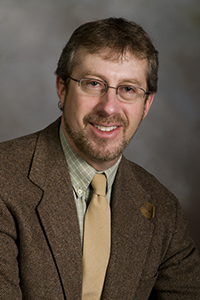 Brian Kleiner, director of Virginia Tech’s Myers-Lawson School of Construction, says his school, which falls under Intelligent Infrastructure, was “sort of a prototype” for destination areas. It’s clearly interdisciplinary, Kleiner says, because he reports to the engineering and architecture deans.

The school combines research and education, exploring how different disciplines can cooperate on projects. That part is mirroring the real world, says Kleiner, who cites a recent visit to a construction company working with the university. A group of Tech graduates at the company included a construction program graduate but also an English major doing technical writing and another Hokie working in human resources. They told Kleiner that if they could have taken one class that had them working together before graduation, “We would have been six months ahead of the curve.” 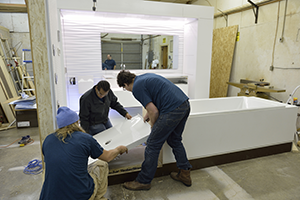 The construction program graduate almost certainly had some real-world experience before graduation. “Everything we do its designed to integrate with industry,” Kleiner says. “We have industry partners on all our projects.”

Multidisciplinary drones
The Intelligent Infrastructure Destination Area will bring students from other disciplines together in the kind of teams they’re likely to join in the working world. Drones, Kleiner says, represent a good example of the kind of projects that could use a multidisciplinary team. A group working on drones might need aerospace engineers along with people equipped to deal with policy, laws, programming and even instruction manuals.

Much of Kleiner’s research deals with the interaction of humans and machines — “figuring out what the machine should do and what the human should do and not just automate because we have the ability to.” 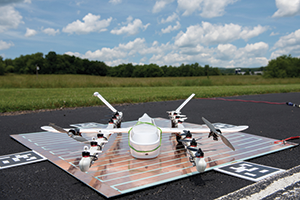 At least some of Mark Blanks’ work involves the interaction of automated machines with automatic control systems. He is director of the Virginia Tech Mid-Atlantic Aviation Partnership. In June, the partnership hosted a test of a NASA-designed air traffic control system. The unmanned system is designed to manage autonomous air traffic — drones — in a chunk of airspace that traditionally had very little traffic.

Below 500 feet, there has been little activity beyond medical helicopters and crop dusters, Blanks says. Now, there’s the potential for all sorts of hobby and commercial drone traffic. The test has as many as five unmanned aircraft in flight at a time, including one simulating a public-safety search, which requires other drones to adjust their flights to give the search vehicle priority. 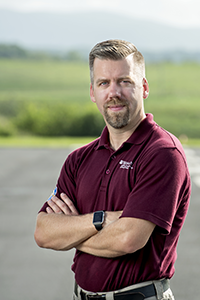 The university’s drone program already has one new important piece of infrastructure, an 80-foot-tall netted enclosure nearly the size of a football field. Because it’s enclosed, drones can be tested there without needing to get FAA approval. That could speed up research considerably. “It’s a playground for innovation,” Blanks says.

Blanks is talking about self-driving Uber-style cars and other innovations appearing in Blacksburg sooner than they show up in other places. “I think we’ll see the Jetsons-type age sooner than we expected because of the work going on here,” he says,