Morgan Olson plans to invest $57.8 million in the 925,000-square-foot plant currently owned by Swedish furniture maker Ikea. The company expects to begin hiring in May, according to Danville city spokesperson Arnold Hendrix.

“Securing a project of this magnitude is a big win for Danville-Pittsylvania County, Southern Virginia and the entire commonwealth,” Northam said in a statement. “Not only will Morgan Olson ensure the future of this plant for many years to come, they will also provide valuable new jobs to hundreds of hard-working citizens of this region.”

Representatives from the Michigan-based company said “this would be a rapid process,” with the first truck going off the assembly line by mid-2020, said Alexis Ehrhardt, president and CEO of the Danville Pittsylvania County Chamber of Commerce. The new jobs, Ehrhardt said, are expected to be full-time and would pay well.

While she couldn’t give exact figures, Ehrhardt said she heard that Morgan Olson’s average salaries would be higher than Pittsylvania’s median household income, which was $41,824 in 2017.

Ikea is set to shut down its Cane Creek Centre facility in December, with an expected loss of about 300 jobs, but the governor’s office says that current Ikea employees will receive priority during Morgan Olson’s hiring process. Many of the Ikea assembly line jobs are analogous to those that Morgan Olson will hire for, Ehrhardt said, adding that the company’s representatives said they are committed to fully training local employees, including those who had never assembled a truck. 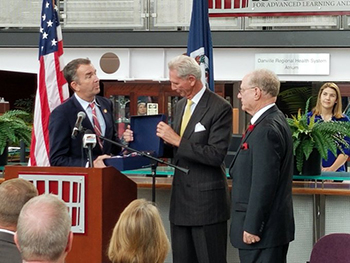 According to the city of Danville, the company also intends to purchase 188 acres of surrounding property owned by the Danville Pittsylvania Regional Industrial Facility Authority to create a storage yard for finished trucks and vans. The Cane Creek Centre industrial park is a collaboration between Danville and Pittsylvania.

Morgan Olson is eligible for several state grants, including a $7 million custom performance grant from the General Assembly’s Major Employment and Investment Project Approval Commission, to be paid post-performance. The Virginia Tobacco Region Revitalization Commission has approved a $1.195 million grant, and the company is also eligible for state tax credits, including through the Virginia Enterprise Zone Program.

A new state workforce initiative, the Virginia Talent Accelerator Program, created by the Virginia Economic Development Partnership and the Virginia Community College System, will support job creation at the plant, with free recruitment and training services specifically customized to the company’s products, processes, culture and other specifications. Morgan Olson is the first company to benefit from the program, which was launched this year, according to the governor’s office.

Ehrhardt said that she hopes other manufacturers in the region will be able to work together and capitalize on opportunities to gain new business connected with Morgan Olson. “I think we have a track record of success locally in building a supply chain.”