Loudoun is the leader, but other areas also are attracting tax-rich facilities

Loudoun County is an industry giant when it comes to data centers, and Buddy Rizer has a book to prove it. On a coffee table in his office at Loudoun’s economic development department is a book titled “Goliath” that commemorates a record in data-center construction.

It’s the story of how Loudoun worked with CyrusOne, one of the country’s largest data center operators, to complete a 220,000-square-foot data center in Sterling in 180 days.

Six months is the shortest construction time ever for a center that size.  “From drawings on the desk to open-the-doors ready, it’s really a powerful story,” says Rizer, the county’s executive director of economic development whom many consider the dean of data centers in Virginia.

Getting centers online is a story that’s been playing out in Loudoun for the past decade. That’s when Rizer joined the county’s economic development staff and decided to expand upon the fiber-rich internet infrastructure already there.  Put in place in the 1990s when major telecom companies such as America Online and WorldCom invested in miles of fiber, the digital infrastructure gave Loudoun an edge in moving forward with what is now the superhighway to the internet on the East Coast.

With bountiful land and affordable, reliable electricity, Rizer says Loudoun’s data-center industry took off. “We went all in,” says Rizer, who obtained industry certifications and traveled the country speaking at data-center conferences. He credits Dominion Energy for being a strong marketing partner, with utility officials sometimes co-presenting with Rizer.  “Their participation, their partnership has been a critical function in the pace of the growth of Loudoun County,” he says.

Today, Loudoun is the No. 1 data center market in the country. It says that 70 percent of the world’s internet traffic passes through Ashburn daily. Some of the country’s largest operators — Digital Realty Trust, Equinix, Amazon Web Services, DuPont Fabros — have massive facilities in “Data Center Alley.”  The site is broadly defined as a 6-mile radius around the intersection of Waxpool Road and Loudoun County Parkway, home to the largest concentration of data centers in the world.

Currently, Loudoun has 10 million square feet of data center space, with another 4.5 million in the pipeline. In addition, 43 new sites are available for use by data centers.

“It’s the Manhattan of the internet,” says Allen Tucker, a managing director in the Tysons Corner office for commercial real estate firm JLL who specializes in data centers.  “If you’re in the financial services world, you need to be at 200 Wall St.  But if you’re in data centers, the hub is at Loudoun County Parkway and Waxpool.”

Loudoun’s 75 data centers house equipment for more than 3,000 technology companies and generate about  $160 million a year in local tax revenue. They have served as a major economic driver, Rizer says, in an affluent county whose largest budgetary debate this year was  “do we add an 8 or 9 percent increase to the school budget?”

Nearby Prince William County also has jumped on the bandwagon. The county has more than 3 million square feet of data center space and recently approved a new zoning district designating 10,000 acres to support new development. 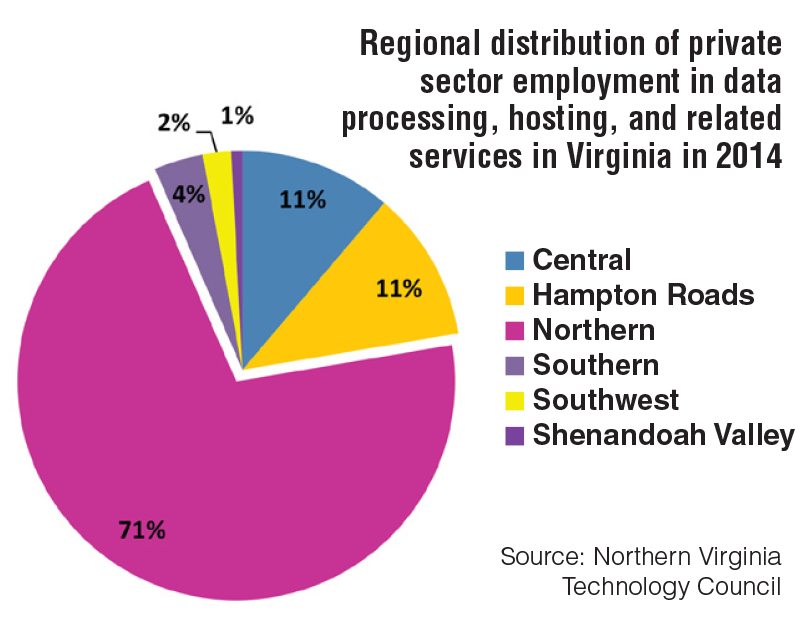 While Northern Virginia is undisputedly the hub, the spokes of this burgeoning industry are spreading to other areas of Virginia. Data centers have opened everywhere from Wise County in the far Southwest to Mecklenburg County in Southern Virginia, providing jobs and tax revenue in areas hard hit by the loss of traditional industries, such as coal mining and textiles.

Meanwhile, Virginia Beach soon will have the first transoceanic cable station in the mid-Atlantic. Microsoft, Facebook and Telefonica, a Spanish telecom company, have joined forces to build a 4,000-mile undersea cable that will connect Virginia to a data hub in Bilbao, Spain. With a bandwidth about 16 million times the size of a home internet connection, the cable will provide Europe with a super-fast connection. It will carve a more efficient path not only to Europe, but to Africa, the Middle East and Asia — markets internet companies look to for new customers.

“This has the potential to be a game changer for Hampton Roads,” says Rob McClintock, a vice president of research with the Virginia Economic Development Partnership. “This gives them a platform to kick-start other industries that need that big-data infrastructure.”

Not many jobs
Data centers, which house computer servers for thousands of companies, are viewed as pillars of the global digital economy. Yet critics point out that, aside from their construction, they don’t create many permanent jobs.  The jobs they do provide, however, pay well: $105,942 a year on average in 2014, according to a recent study done for the Northern Virginia Technology Council (NVTC).

Since jobs aren’t the draw, why are so many communities trying to attract data centers? “They help pay the bills,” says McClintock.

Data centers are capital-intensive projects, he notes, with sophisticated computer equipment that needs updating nearly every three years. That translates into millions of dollars in local tax revenues.

To get a sense of the capital investment, consider Microsoft’s project in Mecklenburg County. With five expansions since the center’s construction in 2010, Microsoft has invested nearly $2 billion and created 250 jobs at what is its East Coast hub for online services.

In Wise County, DP Facilities Inc. recently opened a $65 million data center with top-level security. It is expected to create 40 jobs during the next three years in the areas of technology, facility management and security.

“Locally, we envision the entire Southwest Virginia region as the state’s next secure technology corridor,” says Marc Silverstein, a spokesman for New York-based DP Facilities. “Here’s what it offers: affordable power, connectivity, an ideal climate, a location away from population centers and flood zones, with room for growth.”

With the movement to cloud computing and the increased use of mobile applications and social networks, global internet traffic continues to explode. According to a Cisco report, that traffic soon will support up to 10 billion new devices and connections, increasing from 16.3 billion in 2015 to 26.3 billion by 2020.

Brian Johnston, chief technology officer for QTS, a publicly traded data-center real estate investment trust that operates 25 data centers, says,  “There’s plenty of growth ahead,” and Virginia is well positioned to share in that growth. “It’s one of the best data-center markets in the world,” he says, with reasonable land and power costs, access to fiber and tax incentives.

Dominion Energy charges 5.2 cents per kilowatt hour for large data centers, with slightly higher prices for small centers, according to Stan Blackwell, a director of customer service and strategic partnerships for Dominion in Richmond. “We’re very competitive. We have some of the lowest data-center rates in the nation.”

QTS, based in Overland Park, Kan., bought a former computer chip plant — built by Motorola and Siemens — in Henrico’s White Oak Technology Park and converted it into a data center. QTS purchased the sprawling, 210-acre complex in 2010 for $12 million after the building’s subsequent owner, Qimonda, filed for bankruptcy.  Since then, Johnston says, the company has invested hundreds of millions of dollars to transform the complex into a mega data center. It currently has 500,000 square feet of data storage space in three buildings, and QTS hopes to expand to 1.5 million square feet.

Touring a center
A visit to QTS in Henrico and a Sabey  data center in Ashburn offers a firsthand look into the high-security world of data centers. While these places store information designed to promote human interaction, they are designed to keep intruders out.

On the outside, the centers look formidable. They are surrounded by black crash fencing, electronic razor fences and guard stations. Inside, closed-circuit cameras guard the premises, and visitors are escorted down windowless halls to rooms accessible only by fingerprint or iris recognition.

The rooms, with high ceilings and raised floors, house hundreds of thousands of servers. They sit on racks in steel cages and emit soft colors as they blink and hum while storing the internet communications of people and businesses from around the world.

Grills in the floor at QTS allow cool air to flow in from large air conditioning units so the computer equipment, which runs 24/7, doesn’t overheat. Sabey relies on a Kyoto wheel, a thermal wheel system for distributing air, to cool its servers. In the event of a power interruption, data centers have diesel generators and battery backup to assure uninterrupted service.

Storage isn’t cheap, because data centers are expensive to build. Robert Rockwood, president of Sabey Data Centers, based in New York, said the buildings cost $1,000 to $2,000 per square foot, compared with about $250 per square foot for an office building.

Sabey’s 140,000-square-foot center in Ashburn offers 10 megawatts of power and employs about 35 people.

“No one else has done what we’ve done,” says Gary McLaren, executive director of Henrico’s economic development authority.  “The only folks that are even close are Prince William County, and they’re at $1.25.”

Henrico’s tax break comes on top of a state exemption from the retail sales and use tax.  Passed in 2009, the exemption applies to computer equipment bought or leased for use in a data center — an incentive the General Assembly recently extended until 2035. To be eligible, a facility must be located in Virginia, generate a capital investment of at least $150 million and create 50 jobs at wages 50 percent above the prevailing local wage (a requirement reduced to 25 percent in high-unemployment areas).

Or as Rizer points out: “We have all become content creators. All those tweets and instagrams. That demand will continue to grow.”