On a September afternoon, Stuart Wright was trying to persuade a tourist to bring her son back to visit the town of Damascus in Washington County.

“Bring that little boy down here and he can play in the river, he can hike, he can bike the trail,” Wright coaxed. “Bring him where he’s got something to do.”

Wright, who owns a number of vacation cabins in the area, along with a lodge, an inn and an RV park, serves as the unofficial cheerleader for tourism in Damascus, his hometown.

Back in the 1970s when Washington County leaders first started talking about converting an abandoned 35-mile Norfolk and Western Railway corridor into the Virginia Creeper Trail, a hiking and biking destination running from Abingdon through Damascus to the Virginia-North Carolina line, Wright wasn’t on board.

“I fought to keep the train here,” he recalls. “I thought we needed the train but, boy, I was wrong.”

Even amid a pandemic, Wright says, tourism thrives in Damascus, a town once known for its now-departed timber and furniture industries. As proof, he points to Brinkwaters, the downtown boutique hotel that began welcoming guests in August. It sits near the Appalachian Heritage Distillery, which will open a tasting room and store in October not far from the new Appalachian Trail Center scheduled to open during Damascus’ Trail Days celebration in May 2022.

“Damascus is the poster child for what tourism can do for a community,” Wright says.

Trey Waters had listened to his buddy Wright kvetch so much about having to turn away potential guests because his properties were always booked that Waters, a pharmacist and real estate developer, decided to transform a downtown building he owned into the Brinkwaters hotel, which he says is more accurately described as “a big box of Airbnbs.”

Waters, who splits his time between Montana, North Carolina and Damascus, partnered on the project with his friends Eric and Emily Brinker, who own a Raleigh-based construction company. Brinkwaters is a combination of the partners’ last names.

In addition to sleek modern furnishings, some of the hotel’s 13 suites include full kitchens and sleeping lofts. A bike rack sits in front of the building for guests who come to pedal the Virginia Creeper Trail.

Word about the hotel seems to be out. “We’ve been at capacity for the last several weekends,” Waters says. “That’s tremendous.” 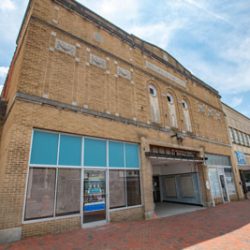