Published May 31, 2019 by Veronica Garabelli

The merger of two Virginia firms in mid-June will create a company hungry for data science talent.

Following its merger with Richmond-based Energy Control Co., Sterling-based Connected Services plans to add 100 workers in the next two years, tripling the company’s current combined work force. Roughly 30 percent of new employees will be data scientists — people who can make sense of data to find solutions.

Connected Services analyzes data from smart devices in buildings, alerting their owners to problems, such as leaks.

The company hopes to attract talent from the University of Virginia’s planned School of Data Science, which will be funded in part by a $120 million gift from Charlottesville-based Quantitative Foundation.

The $120 million gift is the largest private donation in U.Va.’s history. 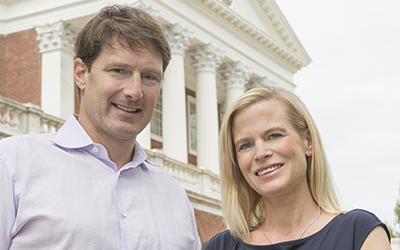 The Woodriffs are U.Va. alums. Jaffray Woodriff, who grew up in a farm outside of Charlottesville, wants to make sure data scientists know how to handle data ethically. That’s an issue that has gained increasing attention at a time when the reputations of many companies have been tarnished by data breaches and privacy scandals.

“It’s very early on with data science, and there is so much progress that will be made in the future,” Woodriff says. “I wanted U.Va. to be a big part of that, especially within the context of responsibly using data [science] and figuring out issues with respect to privacy and regulation.”

Filling a need
In addition to focusing on ethical issues, the school will create a pipeline of highly sought-after workers. According to a survey released in 2017 by the Business-Higher Education Forum and the professional services firm PwC, only 23 percent of college graduates will have data-science and analytics skills by 2021. Yet a majority of employers prefer workers with those skills (69 percent).

The McLean-based banking giant Capital One Financial Corp. has hundreds of open data-science positions. During the past several years, the company’s technology staff has grown from 2,500 to 9,000 employees. That included hiring hundreds of software engineers, developers, and data-science and machine-learning experts.

“We have been known as a leader in enterprise tech, and so we don’t find it as hard as most other companies to find data scientists,” the company said in an emailed statement to Virginia Business. “That said, the broader market — across the country [and] industries — has a massive demand for these skills right now, so it’s becoming more of a challenge for everyone, even the traditional major tech companies.”

Scelzi, who soon will join Connected Services in its merger with Energy Control, says employers want to recruit workers who already have data-science skills instead of training graduates who specialized in other areas. “It’s like saying, ‘I need an accountant,’ and you go hire a CPA,” Scelzi says. “These graduates will know data science and the latest methodology.”

Firms like Connected Services are willing to pay a premium to nab experts in the field. Scelzi says the data-science positions at the company will pay $70,000 to $125,000. “These people are very sought-after these days.”

Other reports estimate even higher salaries for data scientists. According to the California-based staffing firm Robert Half, a data scientist in Tysons can make $135,630 to $231,000 per year. A related position in Danville, where pay is typically lower, can command a salary of $65,369 to $111,300.

The graduates of U.Va.’s data science institute in 2017 said they were offered salaries between  $60,000 and $145,000 with signing bonuses of $5,000 to $15,000. They received offers from employers such as Amazon, Deloitte, Booz Allen Hamilton and IBM. Their job titles ranged from data scientist and analyst to systems engineer and senior statistician.

The case for a school
If U.Va. already is producing graduates in the field through its Data Science Institute, why does it need to create a school? Bourne points to a couple of reasons. While it awards master’s degrees, the institute is unable to hire its own faculty, an impediment to conferring more degrees to meet market demand.

The majority of the Woodriff gift — $77 million — will be used to hire faculty and staff as well as fund fellowships for students and post-doctoral and visiting fellows. In addition to philanthropic gifts, the school will be supported by a $13 million endowment, tuition, state funds and collaborations with companies.

Additionally, $43 million from the $120 million donation has been earmarked to build a 70,000-square-foot data-science school building. The institute currently occupies 4,000 square feet of space scattered in four buildings. U.Va. hasn’t determined where the new building will be located, but it’s considering five sites. The new facility probably will open in about two to three years.

U.Va. hopes to incorporate data science into the building’s design and use. One possibility is using data to assign offices or cubicles based on who the occupants are going to meet on a particular day. “We want this to be a showpiece for Charlottesville,” U.Va. and the state, Bourne says.

Concerns about concept
Plans for the data-science school have been praised, but the concept also has raised concerns.

U.Va.’s faculty senate initially worried that the school wouldn’t have tenured faculty. That issue lead to the university’s decision to award tenure to some professors who will teach at the school.

The faculty senate also raised concerns about how other U.Va. schools and department would be affected by the School of Data Science.

“We addressed that by really being cooperative,” Bourne says. “Our goal here is to raise all boats in the university … to actually help all other schools by what we’re doing, not to compete with them.”

That cooperation includes working with other schools on creating new degrees and programs.

In May, the faculty senate voted to establish the School of Data Science. It now has to be approved by U.Va.’s board of visitors and the State Council of Higher Education for Virginia. If all goes according to plan, the school will begin operation in August in time for the new academic year.

Yet some observers still worry that the gift may create unintended problems. “For all his money and his good intentions, should one rich guy be able to reshape a city? Or should the city itself have a say in how it might change?” Bloomberg News columnist Joe Nocera asked about the Woodriff gift in a column published earlier this year.

Nocera argues that the data science school and an incubator that Woodriff supports could create tech companies that would dominate the local economy and drive up the cost of living.

Jaffray Woodriff says Nocera misinterpreted their conversation. Woodriff says he’s not trying to change Charlottesville’s character but wants to see more U.Va. graduates stay and consider working for local companies. Only a small percentage of data-science students would take the risk of launching startups, he argues.

“I think it would be a good thing to have students have more options, one of which would be staying in a town that most of them seem to love,” he says.

Woodriff doesn’t regret making the gift or investing in the incubator, set to open by 2021, but he says the backlash is unfortunate. He says he and his wife have given away a significant portion of their income, often anonymously, including local organizations involved with affordable housing as well as the Boys and Girls Club.

“I’ve been unfairly stereotyped as a person who is just completely oblivious of local social issues — quite a number of people on Twitter have kind of barked up that tree — and none of them know me,” he says.

Many in the Charlottesville area support Woodriff’s projects and believe they will have a positive impact. One is Ben Pfinsgraff, a U.Va. alum who is co-owner of Common House, a Charlottesville-based social club.

“He has given back an enormous amount,” to the Charlottesville region, Pfinsgraff says. “There’s no bigger player than him.”