Initiatives’ aim: to increase the number of workers with digital skills

In a world increasingly driven by technology, corporate and government leaders across America continually bemoan the lack of digitally fluent and STEM-educated workers.

In Virginia, major health-care systems have 2,000 job openings statewide “and half of those openings are for [computer] coders, and they’re having a hard time filling them,” says Maurice Jones, Virginia’s secretary of commerce and trade.

In many industries there is an urgent need for digitally fluent workers with skills ranging from cybersecurity to computer programming to data management and more.

Toward that end, Jones says, the administration of Gov. Terry McAuliffe has set a goal of adding 500,000 employees with STEM-H (science, technology, engineering, math and health care) certifications to the Virginia workforce by 2018.

“We have to make sure Virginia establishes a brand of having the most prepared workforce for 21st-century jobs,” Jones says. “What Virginia has to do is make sure it has the talent and that we market the talent. Jobs will go where the talent is.”

McAuliffe sounded the same themes at a recent digital fluency forum at Capital One Digital Labs in Vienna. “We must respond to the demands of the changing global economy by providing employers with a steady stream of talented workers who can succeed in the digital era,” he said.

Corporations and nonprofits across the commonwealth are working with state and local governments to meet the challenge.

For instance, McLean-based Capital One announced at the June forum that it’s investing $150 million in Future Edge, a new nationwide initiative to promote greater digital literacy. Highlights in Virginia include Coders, an app-development workshop for middle school students that teaches basic principles of software development. Students learn how to create simple apps with the help of the App Inventor coding platform, created by Google in cooperation with the Massachusetts Institute of Technology.

The financial services giant also is funding groups such as Richmond-based CodeVA and San Francisco-based Black Girls Code, both of which are involved in training children in computer coding skills. Capital One also has developed a free online curriculum with Grovo, a New York learning technology company, to teach digital skills to low- to moderate-income workers.

“We are thrilled to be partnering with Governor McAuliffe,” says Carolyn Berkowitz, managing vice president of community affairs at Capital One.

Not every worker needs a four-year degree, notes Jones. “Fifty to sixty percent of the new jobs over the next 10 to 15 years will not require a college degree, but they’ll definitely need post-secondary education and training. We have to keep our emphasis on graduating B.A.’s and M.A.’s and Ph.D.’s but balance that with the fact that there are also other, equally viable paths. … You can get some coding certifications in months or a year. This is a great path with great wages and great mobility.”

Capital One has focused the bulk of its Future Edge efforts on middle-skills jobs because that is where the opportunity is greatest for increasing earning power, Berkowitz says.

As for other companies, last year alone Fairfax County-based Northrop Grumman Corp. invested $15.9 million on STEM education initiatives worldwide. Since 2010 it has been the primary sponsor and funder for the Air Force Association’s CyberPatriot education initiative, aimed at increasing digital literacy skills among K-12 students across America.

“For us it really is a global imperative. We feel that because we are such a large provider of global solutions that it really is incumbent upon us to help develop the next generation of cyber professionals,” says Diane Miller, director of InfoSec Operations and Cyber Initiatives for Northrop Grumman. She also serves on the education and workforce development group of the Virginia Cyber Security Commission.

“We’ve been in the cyber business for a very, very long time — long before it was called cyber — and we were sensitive early on to the fact that there is a shortage of qualified talent in this space,” Miller says. “And as we’re creating new technologies and new solutions for our customers, we’re out looking for the best and brightest professionals in this space — and frankly so is everyone else — and so years ago we decided we would become part of the solution.” 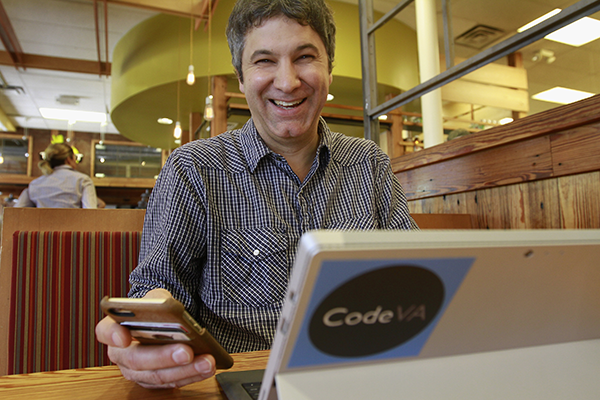 “Right now in the state of Virginia, computer science is taught almost nowhere in public schools, and, when it is taught, it’s very ad hoc,” he says, adding that it’s pretty much the same everywhere else in the nation. Some Virginia school systems may include a unit on app development or coding in an IT fundamentals course, Dovi says, “but there’s no set curriculum for any of those things. It’s something a teacher would decide to do on their own, and they typically know less than students.”

CodeVA, which has received funding from donors such as the Robins Foundation, Capital One and Dominion, was founded in 2013 and is the only organization providing certification training for Virginia public school teachers to teach computer science courses. More than 180 teachers have received training from CodeVA in the last two years. Their school systems commit to having them teach a computer course in the schools as part of participation in the program, which amounts to about 100 hours of ongoing instruction for high school teachers.

CodeVA also offers weeklong summer camps to teach computer coding skills to elementary- and middle-school students. They range in cost from $180 to $220, with early-bird enrollees getting the lowest price. Scholarships are available for students from at-risk backgrounds. Yet, summer camps and after-school programs aren’t a substitute for a school curriculum course, says Dovi.

While the need for cybersecurity professionals in the workforce tends to attract headlines, he notes that companies have a wide-ranging need for digitally fluent employees. Tech companies commonly hire foreign tech workers for open positions, Dovi adds, because there aren’t enough U.S. workers with skills in coding, software design and cloud-based infrastructure.