UPDATE, 5 p.m. Wednesday: A third resident of Canterbury Rehabilitation & Healthcare Center has died, according to a news release from the long-term care facility in Henrico County. Fourteen residents and four staff members have tested positive for COVID-19 over the past 11 days, according to a statement by Dr. James Wright, the center’s medical director.

Two residents died Tuesday, the Virginia Department of Health reported Tuesday afternoon. With today’s death, the number of COVID-19 fatalities statewide is at 13.

Meanwhile, two of the 14 sick residents continue to receive treatment at a hospital, and nine residents are being treated on-site in an isolated unit by nurses and nursing assistants whose “status is being monitored closely,” according to the release. Employees are being screened daily, and those with respiratory symptoms or fever are prohibited from entering, Wright said in the statement.

Dr. Danny Avula, director of the Richmond and Henrico health departments, confirmed the third death after speaking with Wright earlier Wednesday on a conference call.

He anticipates the number of positive cases to rise at Canterbury, while noting that the “biggest challenge is staffing,” because some of the staff have been exposed and are now quarantined. Avula added that his health department dropped off personal protection equipment for staff members Monday and will provide more as needed.

As for finding replacement staff, Avula said his department wants to make sure no one works at more than one facility at a time, which could lead to further spread of the virus. “We’re learning more and more that this virus can spread even if you don’t have symptoms,” he said.

According to the center’s news release, the center has hired an industrial cleaning service to “provide full and ongoing decontamination of the facility. This includes both daily deep cleaning and the incorporation of six hydroxyl generators, which create airborne hydroxyl radicals that treat pathogens in both the air and on surfaces.”

As the number of confirmed COVID-19 cases in Virginia jumped to 391, Gov. Ralph Northam announced Wednesday that he is ordering health care providers to delay elective surgical procedures during the crisis so that resources such as hospital beds and ventilators can be kept on reserve to respond to the growing pandemic. Northam is also ordering all campgrounds, cabins and bathhouses closed as of Friday morning.

Virginia cases surged by 101 cases in 24 hours, according to State Epidemiologist Dr. Lilian Peake, adding that 12 Virginians are now dead from the illness. Two adults died Wednesday morning in the Peninsula region and another died in the Pittsylvania County/Danville area, she said.

The resident of the Pittsylvania-Danville Health District, the first fatality recorded there, died in an out-of-state hospital, according to a news release Wednesday afternoon. The two Peninsula residents — a woman in her 80s and a woman in her 60s — died from respiratory failure in a local hospital, VDH reported. The cause of the illness is unknown, the news release said.

“Hospitals and medical facilities in Virginia and around the country are in desperate need of additional masks, gowns, gloves, and other personal protective equipment,” Northam said in a statement issued later Wednesday. “While we work to increase our supply, it makes sense to decrease the demand on that equipment where we can. Postponing elective surgeries allows us to divert more PPE to the medical staff who are dealing with the COVID-19 outbreak so we can better protect the men and men on the front lines of this public health emergency, fighting to keep us all safe.”

The public health emergency order does not apply to any procedure if the delay would cause harm to a patient, the governor added. The order also does not apply to outpatient visits at hospital-based clinics, family planning services or emergency procedures. Additionally, licensed inpatient and outpatient surgical hospitals, free-standing endoscopy centers, physicians’ offices and dental, orthodontic and endodontic offices may perform any procedure or surgery that if postponed or canceled would result in the patient’s condition worsening.

Speaking about the need for medical volunteers, Gov. Northam urged Virginians with medical training to join the Virginia Medical Reserve Corps, a citizen volunteer group comprised of medical and public health professionals. Northam also talked again about the commonwealth’s urgent need to source personal protective equipment such as masks and gowns for front-line health care providers and first responders such as police and fire fighters.

Fifty-nine people are hospitalized with coronavirus symptoms, according to VDH. Fairfax County has the most cases at 76, followed by Arlington County with 46 and James City County with 41.

This story will be updated.

Thursday coronavirus update: More than 1,700 in Va. have virus 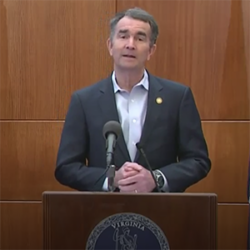