Consumers often are frustrated at the checkout register when they discover a store’s credit-card terminal doesn’t accept their chip-enabled cards. And, they aren’t alone.

Retailers are frustrated as well by the conversion to chip cards. In fact, some store owners in other states are suing to recoup their costs in converting to the chip system.

Chip credit cards are designed to prevent thieves from stealing customers’ information to make fraudulent purchases. Like credit cards with magnetic stripes, chip credit cards store information including customers’ account numbers, expiration dates and three-digit security codes. (Debit cards also store basic information along with a PIN number.) The difference is that each chip-card transaction generates “dynamic” data that is good for a single purchase only, helping to protect against the creation of counterfeit cards.

A full-scale switch from one type of card to another requires banks putting the new cards in customers’ hands and retailers installing terminals and software to  read the cards. That second step has proved to be problematic throughout the country, especially with debit cards, which are transitioning to chip technology much more slowly than credit cards are.

‘Liability shift’
The process in the U.S. to convert to chip-enabled cards started in 2012. On Oct. 1, 2015, a “liability shift” went into effect. Up until that time, card issuers absorbed all the costs of fraudulent purchases.

Now the responsible party can be either the merchant or the issuer, whichever has not implemented chip technology. The shift “rewards the entity that is more secure,” says Beth Kitchener, spokesperson for MasterCard, based in Purchase, N.Y. “It is whoever has taken that extra step. They are not responsible for the fraud.”

Conversion to chip cards has been lengthy in other countries. It typically takes “about two to three years after a liability shift for a country to have 60 to 70 percent” of its domestic card purchases using chip cards, says Stephanie Ericksen, vice president of risk and authentication products at Visa Inc., based in San Francisco. “It has taken four to five years to get to 90 percent [in other countries]. In the U.S. today, it’s a little more than 30 percent, so that’s pretty much on pace with other markets.”

Countries around the world now using chip cards include the United Kingdom, Australia, Canada, Brazil, Colombia, Mexico, Venezuela and New Zealand as well as nations in Africa and the Middle East. “It’s important that the U.S. get going,” Kitchener says.

One impetus for using chip cards in European countries was the lack of “effective telecommunications and phone systems across country boundaries,” says Doug Johnson, senior vice president of payments and cybersecurity policy at the American Bankers Association, based in Washington, D.C.  Before the liability shift, “it was more difficult in Europe for the transactions to be authenticated across country lines through telecommunications,” Johnson says.

Wave of data breaches
The primary motivator for adopting the use of chip cards in all countries is the rising tide of data breaches. Once a thief steals a credit card number, it can be replicated on a counterfeit card. Chip cards add an extra layer of security to transactions.

Credit card issuers in the U.S. were quick to meet the Oct. 1 liability shift deadline. “It was definitely in the banks’ interest to get the cards in people’s hands,” Kitchener says, adding, “It was obvious to the banks how much fraud there is, but merchants had never seen fraud costs before and may not have realized the extent of counterfeit card fraud in the U.S. Many are seeing it now for the first time.”

Some banks issued new chip cards en masse while others issued them on a rolling basis based on customers’ card expiration dates. “One hundred percent of our banks have begun to issue chip cards,” says Bruce Whitehurst, president and CEO of the Virginia Bankers Association. “There is a great deal of interest on the banking side to do everything possible to reduce incidents of credit-card fraud and limit their liability.”

On the other hand, adoption of the chip card technology by retailers has been sporadic. Reasons for the slow changeover vary. The October 2015 liability shift, for instance, occurred during a busy shopping season, and many retailers chose to wait before starting the process. That created a “bottleneck,” says Johnson.

Many retailers have bought equipment to read chip cards, but they haven’t been able to accept the cards for purchases. The new terminals must be tested and certified by processors or payment providers before they can be used.

“Retailers are very frustrated,” says Jodi Roth, director of government affairs in the Richmond office of the Virginia Retail Federation. “They have had the time to get ready and have paid to have the hardware, but it’s just sitting there until the software is installed.”

Software vendors test the terminals and get them up and running. These vendors “can’t keep up with demand, but that’s a disservice for our retailers,” Roth says.

Because they haven’t been able to use chip-card technology, some retailers are seeing a growing number of chargebacks for fraudulent purchases. “They could be over $1 million a week for some midsize to large retailers,” says Liz Garner, vice president of the Merchant Advisory Group, based in Minneapolis. “Some have had an over 1,000 percent increase in chargebacks, and it’s not really their fault. They aren’t able to get the certification done.”

CNN Money reported that four grocery stores in California, New York and Florida are seeking class-action status in a lawsuit they filed against four major credit cards companies seeking to recoup their expenses in converting to the chip card system. The plaintiffs call the switch an industry conspiracy that violates free-trade laws.

Speeding up purchases
MasterCard and Visa say they are making strides in terminal testing and simplifying the certification process, which varies from one retailer to another. The more complex a retailer’s point-of-sale system is, the more tests are required.

At stores where chip cards are being accepted, another problem has cropped up. Many consumers complain that their chip-card purchases can take two to three seconds longer than normal.

To address the issue, Visa this spring began offering merchants Quick Chip technology to speed up chip-card purchases. The technology enables customers to remove their chip card from the terminal without waiting for the transaction to be finalized.

In April, MasterCard introduced M/Chip Fast, a new software for retailers based on “tap-and-go” technology, also designed to speed up chip-card purchases. Tap-and-go is a contactless method of payment where the card is simply touched to the screen.

“Consumers understand why we are changing the way we pay for things when we explain that this is keeping them safer,” says Kitchener of MasterCard.

Progress in the conversion is continuing. In the MasterCard network, 33 percent of all merchant locations in the U.S. are chip active. That means 2 million stores can now accept chip cards.  Visa reports that an average of 23,000 new merchant locations become chip ready each week. It now has 1.46 million chip-ready locations. Approximately 35 percent of merchants using Visa in Virginia are chip enabled.

The good news is that chip cards are helping to fight fraud. Visa saw a drop of 47 percent in fraudulent purchases at chip-ready merchants in May compared with a year earlier. MasterCard saw a 54 percent decrease in fraud from April 2015 to April 2016 at U.S. retailers who have completed or are close to completing their adoption of chip cards.

Anytime a new technology is put in “the largest economy in the world there will be some necessary modifications and enhancements and that is what we are seeing,” says Johnson of the  American Bankers Association.

Union Bankshares CEO to step down in January 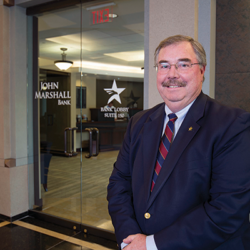 The evolution of ATMs