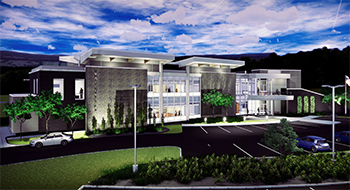 ValleyStar Credit Union has begun construction on a 19,000-square-foot building in the Summit View Business Park in Rocky Mount.

The credit union is expected to be the first company to set up shop in the 550-acre park.

ValleyStar is spending an estimated $7 million on the project, the first phase of which is expected to complete by the end of next year. The building will house 40 employees, half of which will new positions.

Based in Martinsville, the credit union has more than 55,000 members.

Another future tenant at Summit View, Stik-Pak Solutions, is expected to begin construction soon on a $14.3 million, 100,000 square-foot facility that will allow it to relocate and expand its Franklin County operations.